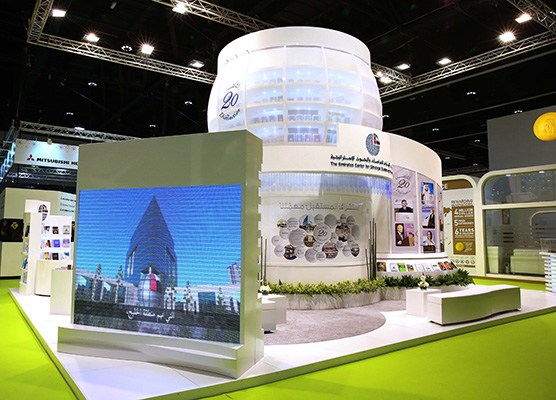 The Emirates Center for Strategic Studies and Research (ECSSR) partipated in an exhibition organized alongside the World Future Energy Summit, which was held under the auspices of H.H. General Sheikh Mohammed bin Zayed Al Nahyan, Crown Prince of Abu Dhabi and Deputy Supreme Commander of the UAE Armed Forces, on January 20–22, 2014 at the Abu Dhabi National Exhibition Centre (ADNEC). The Summit was hosted by the Abu Dhabi Future Energy Company (Masdar). Last year’s event featured more than 600 exhibitors, attracting more than 26,000 visitors, including ministers, high-ranking officials, politicians and leading environmentalists.

The ECSSR showcased a select range of its Arabic and English publications. These included both original and translated books written by internationally reputed scholars and experts in the fields of energy, international relations, security, and education. Among the ECSSR’s recent releases in Arabic and English is Technology and the Future of Energy, which provides a strategic outlook for technological development in the energy industry based on analysis of global energy supply and demand, current and future investment trends in energy technology, the potential impact of technological advances in the oil and gas industry, and the viability of alternative energy technologies.

Featured ECSSR publications also included peer-reviewed monographs in Arabic and English which examine various strategic, political, economic and social issues, as well as significant regional and global developments. These publications were of interest to intellectuals, industry experts and researchers specializing in issues affecting the Gulf region, the Middle East and the wider Arab world, and appeal to a broad global readership.

The ECSSR has taken part in the following previous exhibitions of the Summit: