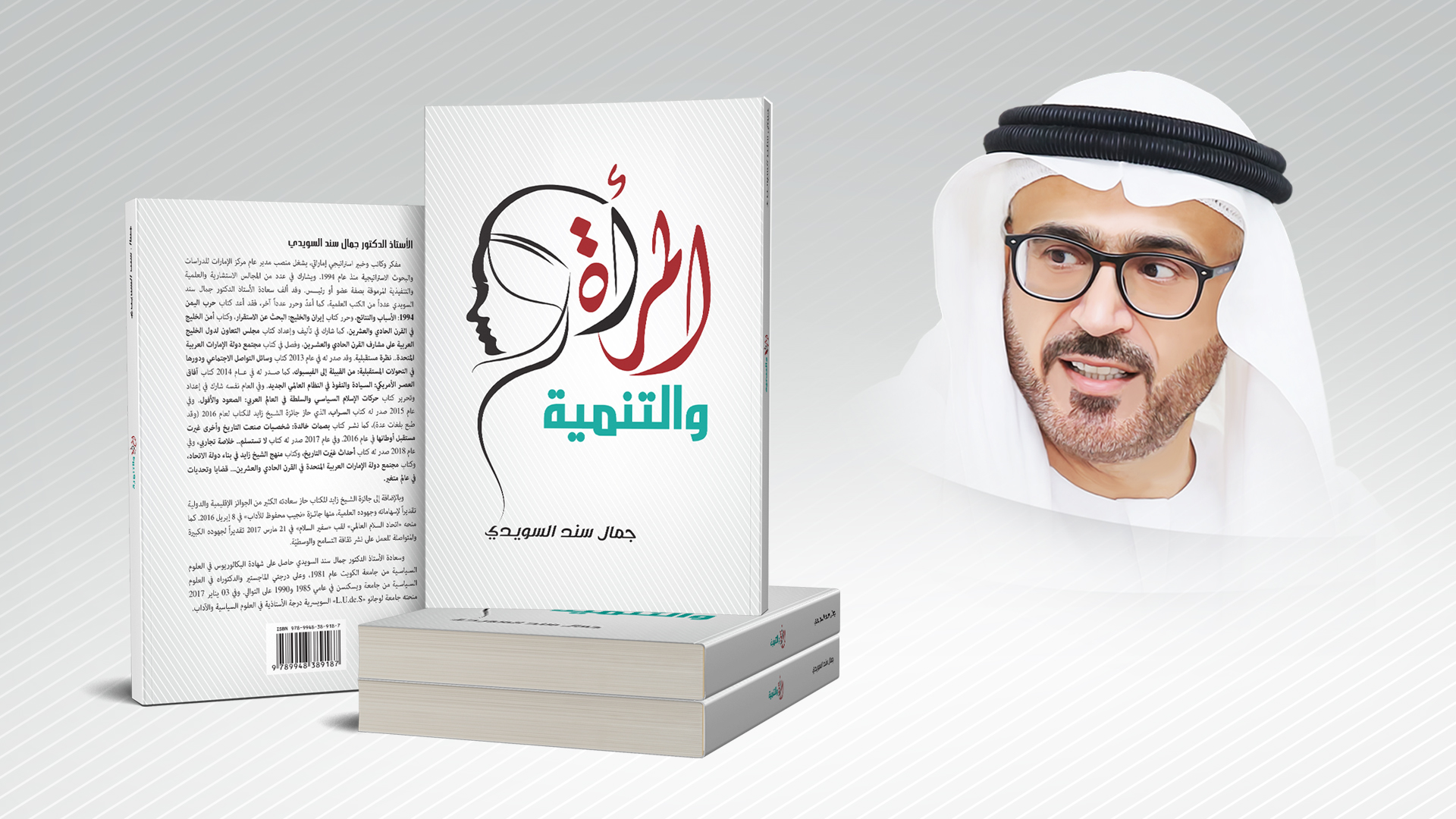 H. E.  Prof. Jamal Sanad Al-Suwaidi, Director General of the Emirates Center for Strategic Studies and Research (ECSSR), has published a new book, Women and Development. It explores the most pressing issues facing women and their vital role in development. His Excellency believes these challenges have overshadowed Arab-Islamic thought, and that issues facing women concern all of society. These issues can only be resolved with contributions from public and private institutions, and all members of society, in order to elevate women’s status and enhance their participation in development.

The book, published on August 28, coincides with an important annual occasion, Emirati Women’s Day. His Excellency highlights how UAE leadership efforts to empower and support women are part of a wider aim to empower members of society, making them partners in the nation’s development process. This also applies to the UAE women who have proven their merit and become partners in various fields, alongside their Emirati brothers. Prof. Al-Suwaidi calls for special recognition for Her Highness Sheikha Fatima bint Mubarak, Chairwoman of the General Women’s Union (GWU), President of the Supreme Council for Motherhood and Childhood, Supreme Chairwoman of the Family Development Foundation (FDF) and ‘Mother of the UAE’. Her contributions have helped achieve many remarkable feats and world records, providing an environment that is conducive to supporting and politically empowering UAE women.

Prof. Al-Suwaidi’s engaging book, Women and Development, delves into the subject over four chapters. The first examines the role of women and their influence on development, while chapter two looks at the issue of women and religion. Chapter three takes a detailed look at women in the GCC. Chapter four, titled Sheikh Zayed and Women: Vision and Achievement, highlights the status of women in the UAE, as a model for all Gulf and Arab women. This model was established by the founder of the UAE, the late Sheikh Zayed bin Sultan Al Nahyan (may God rest his soul in peace), and his open-minded intellectual vision, realized through practical policies and programs.

His Excellency points out that Women and Development aims to focus on the important role of women in furthering the development process, as well as the challenges they face in this role. He also charts developments in GCC countries, and the UAE in particular, in empowering women and enhancing their role and status in the development process. The book also aims to identify the political, cultural, economic and social factors that influence women’s participation in the work forces of Arab Gulf countries.

Women and Development draws on a large body of evidence to expose the weak and backward discourse of Islamist political groups who would impose restrictions on women’s freedoms, as well as their participation in the development process, based on self-serving interpretations of religious texts. His Excellency also tries to offer constructive answers to urgent questions on the status of women in the context of religion, their opportunities in education, position in the work force and their relationship to male counterparts. To that end, the author makes use of relevant data, surveys and analytical readings of the legal landscape for women in GCC countries.

The book concludes that women’s participation in the economy is imperative for social and economic development in Arab Gulf countries, improving the status of women in society by removing social and cultural obstacles, as well as enhancing their participation in the development process. This can be achieved by greater efforts from governments with the genuine aim of giving women their rights, and allowing them to fully participate in the development process. Communities and individuals also have a role to play, by abandoning outdated traditions, customs, and radical misinterpretations that are attributed to religion but in fact keep women shackled within the walls of their homes.

H.E. Prof. Jamal Sanad Al-Suwaidi has published many books over the years, which have resonated with decision-makers, the media and experts in the UAE and beyond. His latest book, United Arab Emirates Society in the Twenty-first Century: Issues and Challenges in a Changing World, was the expansion of a study His Excellency published a decade and a half ago titled UAE Society: A Future Perspective, first released in 2003. In the subsequent book, Prof. Al-Suwaidi applies a variety of approaches and ideas that take into account the nation’s achievements, the nature of the transformation the UAE has witnessed, and potential challenges to the UAE’s development and modernization in the future.