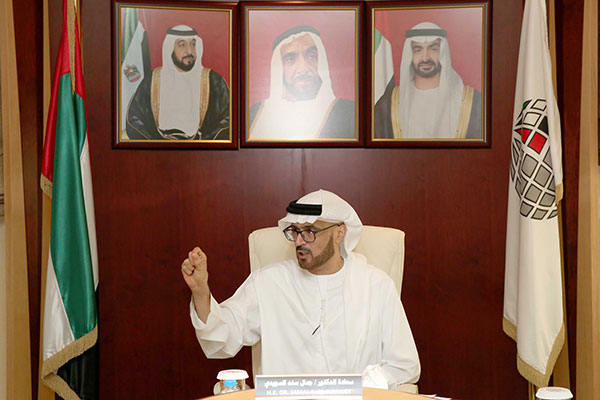 The Emirates Center for Strategic Studies and Research (ECSSR) held the first meeting of members of the UAE Federation Library Scientific Advisory Council at its headquarters in Abu Dhabi on Sunday (13 September 2015) in the presence of His Excellency Dr. Jamal Sanad Al-Suwaidi, Director General of ECSSR. The meeting was part of the Center’s plan to raise the library’s stature and expand its collection of books, references, periodicals, databases and information subscriptions that serve scientific research and help build a knowledge-based society.

At the beginning of the meeting, members of the Council lauded the efforts made by H.E. Dr. Jamal Al-Suwaidi for the progress made by the Library and giving it prestigious position as one of the most unique academic libraries in the UAE, the Middle East and the whole world. The library contains modern, old and rare books, periodicals, scientific references, maps and atlases, encyclopedias on various subjects, a wide range hardly available in the region.

Participants also appreciated the library system, which is the most advanced in the world. They praised the role of the library in enriching the UAE’s cultural and intellectual capital by providing services to decision-makers and the community besides intellectuals, academics, writers and students. The library contains latest books, references, encyclopedias, scientific journals, official reports, maps, and electronic databases, in both Arabic and English. It also has an online query option on library holdings available for all.

During the meeting several key issues were discussed, which included the future role of the library and how to tackle the challenges it faces in light of the evolution of digital technology and applications on smart devices. Ways to develop the library further and to increase its holdings to help strengthen its scientific position in and outside the UAE also came up for discussion during the meeting.

Towards the end of the meeting, participants recommended development of digital library and establishing of strategic relationships between the UAE Federation Library and local, Arab and international libraries. They suggested that through this route, the library holdings can be diversified into strategic areas for the benefit of all segments of the society and enhancing interactivity.