Third International Conference on Mathematical Sciences and their Applications

Third International Conference on Mathematical Sciences and their Applications 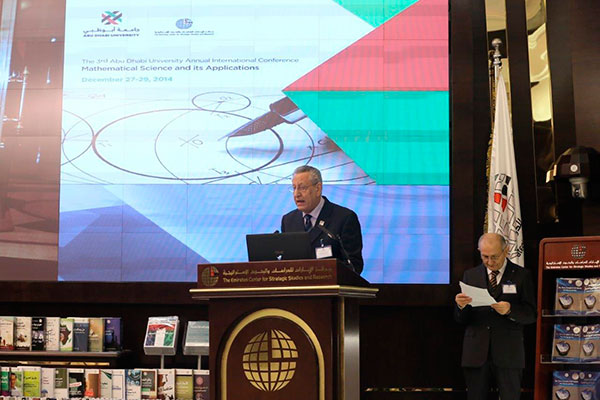 The Emirates Center for Strategic Studies and Research (ECSSR) hosted the Third International Conference on Mathematical Sciences and their Applications, organized by Abu Dhabi University, during the period 27-29 December 2014. The Conference was aimed at encouraging cooperation among researchers in various fields of mathematics and bringing them together to discuss latest research and developments in mathematical sciences and their applications. The broad-based peer-reviewed conference covered all branches of mathematics and interdisciplinary researches, such as Algebra and Applications, Differential Equations, Approximation Theory, Calculus of Variations, Coding Theory, Combinatorics , Control Theory, Cryptology, Geometry, Discrete Mathematics, Dynamical Systems and Ergodic Theory, Field Theory and Polynomials, Fluid Mechanics and Solid Mechanics, Fourier Analysis, Functional Analysis, Functions of a Complex Variable, Matrix Theory, Mathematical Biology, Mathematical Economics and Financial Mathematics, Mathematical Physics and others. The conference aimed to publish refereed, original research studies and articles that describe the latest developments and researches in the field of engineering and mathematical sciences. The scientific committee of the conference consisted of experts from many countries, including the United Arab Emirates, USA, Romania, Poland, South Korea, Oman, Qatar, Bahrain, France, Russia, China, Brazil, Portugal, Kazakhstan, Japan and others. Main speakers at the event featured prominent global experts such as Prof. Dr. Martin Bohner, Professor of Mathematics and Statistics at Missouri University of Science and Technology, USA; Prof. Nail Sulieman, Bahrain University; Prof. Sandra Pinelas, Academia Militar, Portugal; and Dr. Kirane Mokhtar, Universite de La Rochelle, France. The conference was attended by researchers, scientists, scholars, and students from different parts of the world. For more information: http://www.adu.ac.ae/icmsa2014