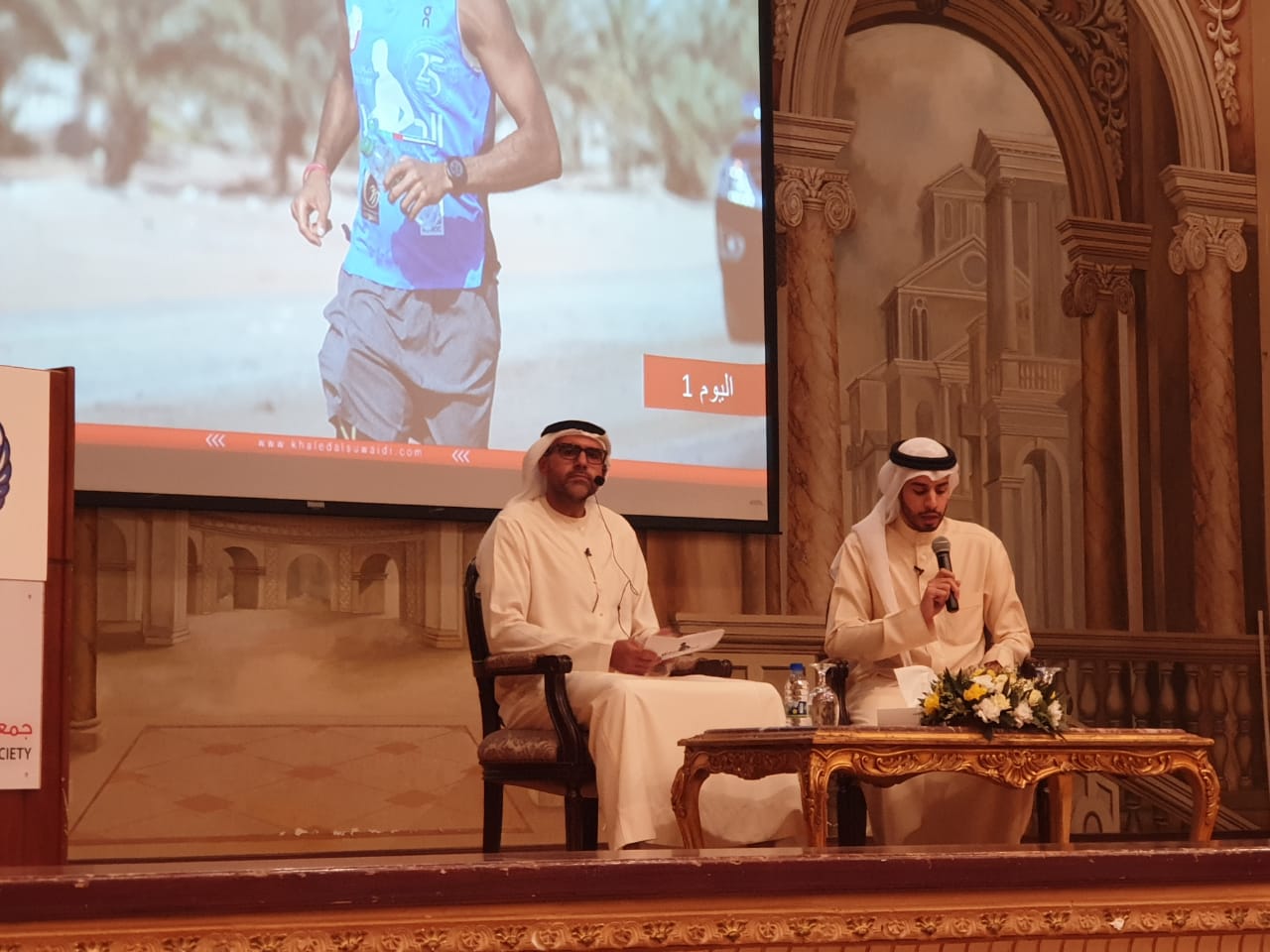 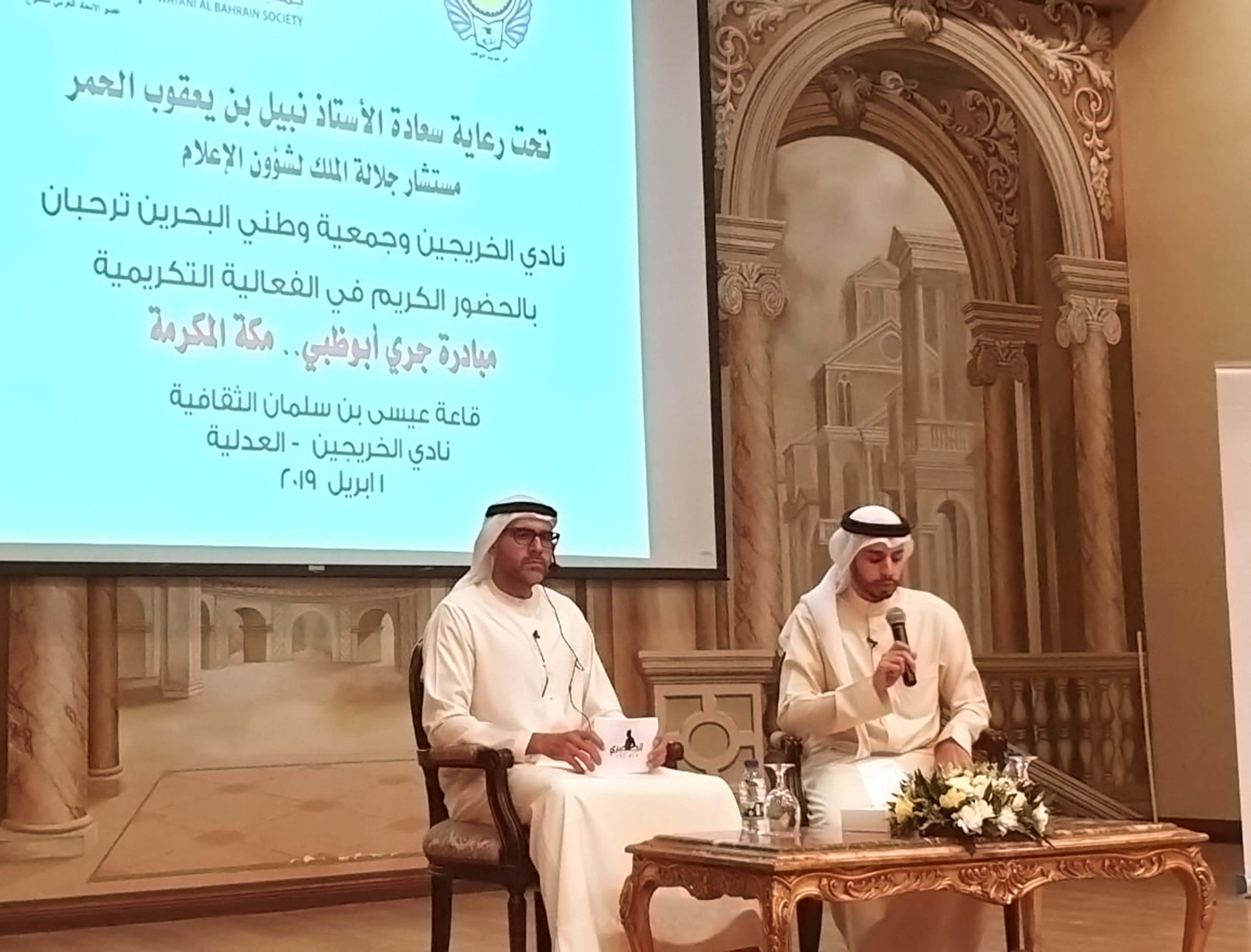 The Watani Al Bahrain Society, collaborating with the Alumni Club Adliya in the Kingdom of Bahrain, organized an honoring ceremony for Dr. Khaled Jamal Al-Suwaidi, Executive Director of the Emirates Center for Strategic Studies and Research (ECSSR), in recognition for his extraordinary Abu Dhabi-Makkah Run.

Dr. Khaled managed to complete 2070 kilometers of continuous running and walking starting from Sheikh Zayed Grand Mosque in Abu Dhabi on February 1, 2019. He reached the Holy Grand Mosque in Makkah on March 1, 2019, in an unprecedented challenge that attracted a wide attention from various media agencies.

The honoring ceremony was organized on Monday, April 01, 2019, under the auspices of His Excellency Mr. Nabil bin Yacoob Al-Hamar, the Advisor for Information Affairs to His Majesty the King of Bahrain, at ISA Bin Salman Cultural Hall in Adliya, in Manama. The event was attended by His Excellency Sheikh Dr. Khalid bin Khalifa al Khalifa, Executive Director of the ISA Cultural Centre, His Excellency Prof. Jamal Sanad Al-Suwaidi, Director General of the ECSSR, and a number of officials from the Kingdom of Bahrain, as well as a large number of journalists, writers, media professionals, and people interested in the sport of running.

At the beginning of his speech, Dr Khaled said that he took up ultra-marathon running because he wanted to get out of his comfort zone and learn new things about himself.

He said that when he was depleted, fatigued, and sometimes physically and mentally drained, he would put himself in a position not many would venture out to do. He would give himself two choices: (1) he could stop; or (2) he could push through, knowing that the same two options will appear in the future.

Dr Khalid said that he decided to always push forward. He realized that doing this created for him an opportunity to discover characteristics about his personality .He explained that physical attributes are critical in order to run long distances and fight through barriers. Mental strength and fortitude was the training of choice throughout his preparation. From his experience and after running more than 10,000 km in training prior to his run to Makkah, he trained his mind to accept that injuries will occur, not might occur. He also said that he trained his mind to embrace the point where the body might completely fail. And most importantly, he trained his mind to keep moving forward when nothing seemed to be working. He said that he felt this way at kilometer 1,100 which was half way to Makkah.

Dr. Khalid said that the run was his way of showing the world the deep, historical brotherly ties that the United Arab Emirates shares with the Kingdom of Saudi Arabia and to pay respect to the bravery and heroism shown by our fallen soldiers in their efforts to bring peace and stability to our region and the Arab World as a whole. He confirmed that as an Emirati citizen, he has learned so much from the UAE leadership—a leadership that taught us that nothing is impossible.

Dr. Khalid said that he was inspired by the relentless will of his father, His Excellency Prof. Jamal Sanad Al-Suwaidi, Director General of the ECSSR, who has an outstanding mentality and determination that has given him the ability to achieve what he wants.