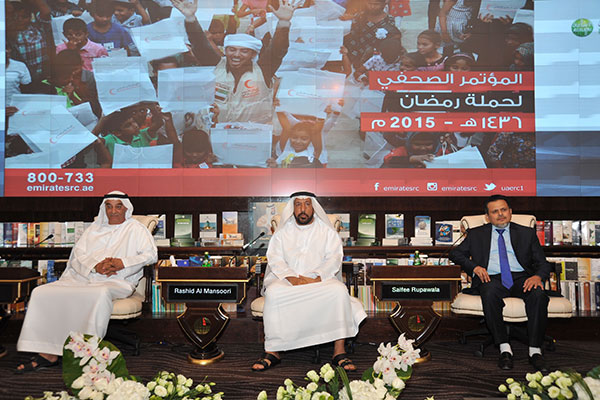 The Emirates Center for Strategic Studies and Research (ECSSR) recently hosted the annual press conference of the UAE Red Crescent Authority (RCA) at the Sheikh Zayed bin Sultan Al Nahyan Hall in the Center’s premises in Abu Dhabi. Sponsored by Dubai Islamic Bank, Abu Dhabi Cooperative Society and Lulu Group International, and supported by the ECSSR, the conference was organized to announce the RCA’s charity and humanitarian projects for the holy month of Ramadan 1436 AH/2015.

The press release issued at the conference stated that the RCA has completed its preparations for the humanitarian campaign in the holy month this year. H.E. Dr. Mohamed Ateeq Al-Falahi, Secretary General of the RCA, said that the authority has allocated AED22,016,000 for this season’s projects. The amount will be spent across all emirates, pursuant to the directions of the country’s leadership, which gives top priority to local affairs.

H.E. Dr. Al-Falahi said that an amount of almost AED9 million has been allocated for the Iftar project. He added that the RCA allocated AED16 million to enhance its humanitarian efforts abroad during the holy month, including AED9 million for Iftar, Zakat Al-Fitr, and Eid Gifts programs. As many as 71 entities in 57 countries will benefit from these programs. Another sum of AED7 million has been allocated for the Ramadan Provisions program in countries which receive waves of emigrants from armed conflict zones such as displaced Iraqis and Syrians who have escaped to Jordan and other neighboring countries.