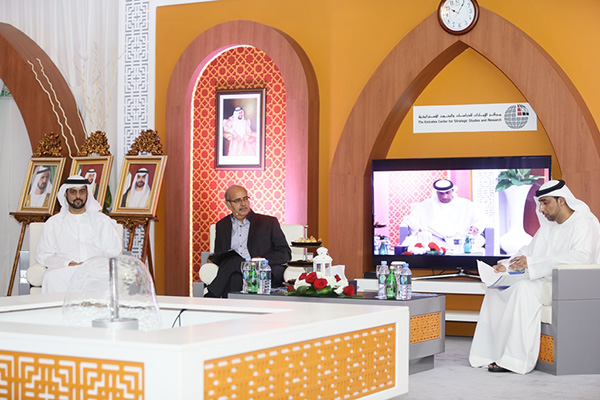 As part of the intellectual and cultural activities held during the Holy Month of Ramadan, The Emirates Center for Strategic Studies and Research (ECSSR) organized the fourth and final session of the Ramadan Strategic Dialogue on Tuesday, July 30, 2013, with two lectures delivered on the topic “Moderation and Political Islam,” delivered by Salah Al-Din Al-Jourshi, Journalist and Chairman of the Al Jahiz Forum, Tunisia and by Dr. Khalifa Ali Al-Suwaidi, the Assistant Professor at the United Arab Emirates University.

In his lecture, Salah Al-Din Al-Jourshi stressed that the 'moderate Islam' should not merely be a slogan for public consumption but this should be practised in daily life and should be visible in the social and economic context. It in this respect that the movements of political Islam failed in the Arab region, including the Ennahda Movement in Tunisia. According to the expert, these movements remained preoccupied with issues of identity and Islamizing the society but neglected pressing economic issues and the needs of the masses. Their closed mindset and exclusivist approach made them unpopular.

In the next lecture, Dr. Khalifa Ali Al-Suwaidi pointed out that movements of political Islam suffered from ideological stagnation and isolation. He stated that after the collapse of the dictatorial regimes, Western countries looked up to alternative political parties and were inclined toward the more organized forces like the Muslim Brotherhood. Their optimism was based on the Turkish experience, but they failed to realize the big difference between the Turkish and the Arab experience. While Turkey’s government was able to effectively address the economic problems of the country and the welfare of its people, the religious movements in the Arab world engaged themselves in empty sloganeering and worked hard toward excluding other parties from the political space. The lecture stressed that the UAE stands out as a unique model in the Arab world which has delivered a highly evolved system of development in all areas and has gained the admiration of the world.