ECSSR ECSSR NewsThe Mirage Hailed at ‘The Role of Intellectual Efforts Against Extremism’ Conference, Hosted by the University of Antwerp

The Mirage Hailed at ‘The Role of Intellectual Efforts Against Extremism’ Conference, Hosted by the University of Antwerp 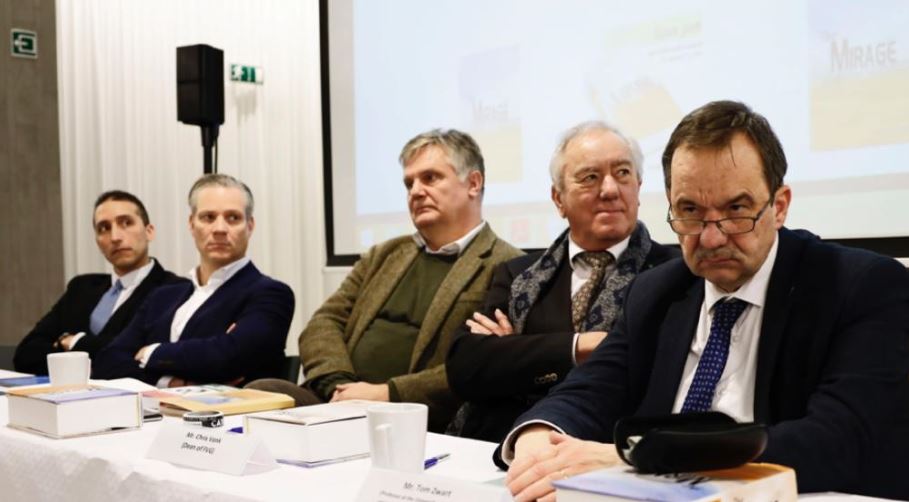 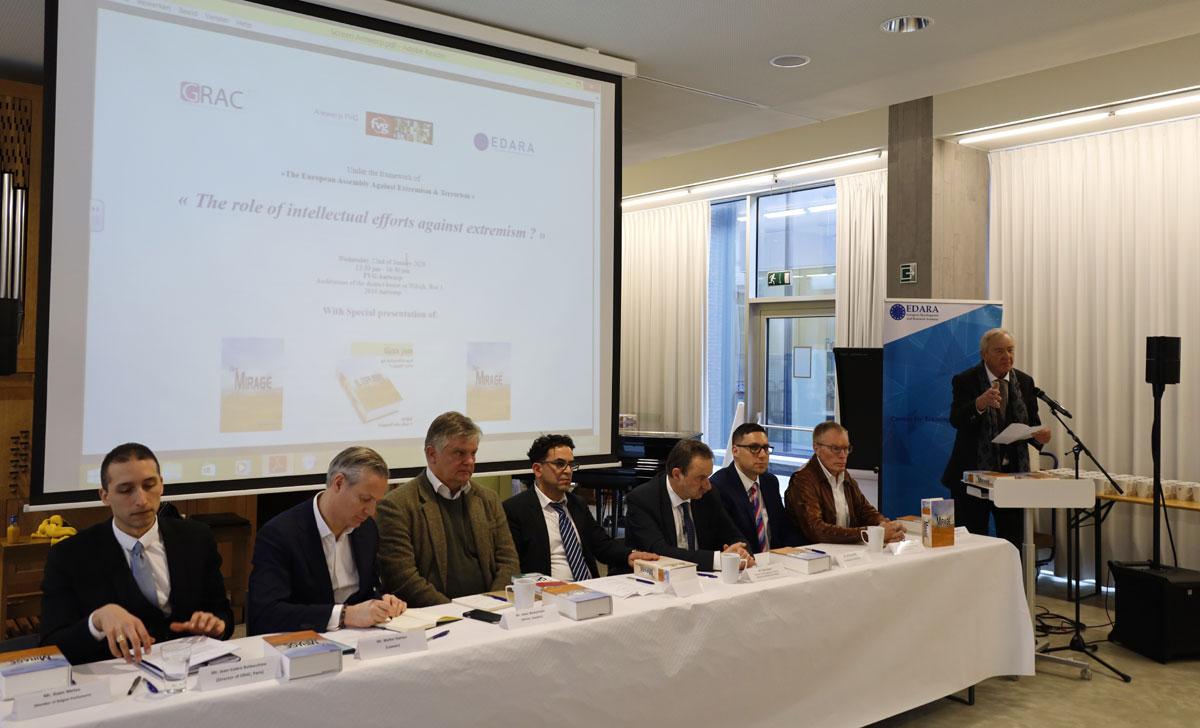 Within the framework of the European Assembly Against Extremism and Terrorism, the prestigious University of Antwerp in Belgium hosted a conference titled ‘The Role of Intellectual Efforts Against Extremism’, on Wednesday, January 22. The conference, held in the main auditorium at the university’s Faculty for Comparative Study of Religions and Humanism (FVG), was organized by the faculty in collaboration with the Geopolitical Research and Analysis Circle in Paris, and the European Development & Research Academy in Ghent.

The conference focused on a range of significant issues, including the importance of combating extremism and terrorism, as well as the role of intellectuals in fighting the spread of extremism, and the support necessary to enhance their efforts. Participants also discussed how to address extremist ideology through moderate thought. In this regard, Dr. Nedal Shaqir, Professor of Strategic Communication and Government Relations in Paris, underscored in opening remarks to the conference that “such a vital and important event comes in the framework of a major campaign that seeks to promote investment in intellectual efforts to combat extremist ideology, which has dominated the minds of many, primarily young people in European societies”.

He added: “In light of the current circumstances, raising awareness and carrying out intellectual events are necessary. Thought is the only tool to curb the risks brought by extremist ideologies.”

Prof. Chris Vonk, Rector of the Faculty for Comparative Study of Religions and Humanism, Antwerp University, emphasized the importance of inter-religious tolerance and dialogue to combat the scourge of extremism that has spread all over the globe, as the only way to a better and safer world for all. He said there is a misunderstanding about religions, which are meant to unify people, regardless of their differences, race or orientation, based on noble human values. However, ideologies have become a source of division in societies. Prof. Vonk stressed the key role of intellectuals in combating extremism and terrorism, through the spread of knowledge. In this regard, he praised the efforts of H.E. Prof. Jamal Sanad Al-Suwaidi, Director General of the Emirates Center for Strategic Studies and Research (ECSSR) in Abu Dhabi, and highlighted the importance of The Mirage, which was put forward for a Nobel Prize nomination in Literature in 2019, and is a significant reference that sheds light on the danger of extremist Islamist movements.

According to Tom Zwart, Director of the School of Human Rights & School of Global Justice, and Coordinator of School of Law, University of Utrecht, Muslim communities in Europe categorically reject the acts of extremist Islamists, in or outside Europe. He stressed the need to monitor religious schools and the religious narratives of mosque leaders in Europe. Zwart considers the role of education as vital in reducing extremism, and he talked about current projects in Netherlands to combat extremism and Islamophobia. He also praised The Mirage, describing it as a rich encyclopedia in this area of study.

Jan Van Reeth, Professor of the History of Oriental Studies, Faculty for Comparative Study of Religions and Humanism, University of Antwerp, presented a historical approach to some research that promotes extremism and the misunderstanding of religious texts, hoping that people instead focus on the spirit of religious texts that combats extremist and misleading ideas. He described The Mirageas a praiseworthy book because of the approaches it advocates for promoting tolerance and interpreting the mechanisms of extremist groups.

Swedish author and publisher, Johan Westerholm said that combating extremism in Europe is fraught with many challenges, especially among the second and third generations of migrants. He pointed out that writers and researchers should play a pivotal role in combating extremist Islamist ideologies, especially those of the Muslim Brotherhood, which is a real, imminent danger to European communities that undermines their security. In this context, Westerholm referred to The Mirageas one of the most important books to have been published recently, due to its rich, unique and detailed insights on the mechanisms of extremist Islamist groups.

Dr. Magnus Norell, of the Washington Institute for Near East Policy, discussed the role intellectuals should play in combating extremism. He stressed that we need more initiatives that promote the role of intellectuals in combating extremist ideas; pointing out that extremism knows no religion, despite the recent spread of Islamist extremism. He urged people to read The Miragebecause of the valuable and important information it provides in this area.

Prof. Johan Temmerman, Dean of the Faculty of Protestant Theology in Brussels, spoke of the intellectual efforts to address extremism and terrorism as a noble human obligation and objective. He stressed the importance of religious studies in combating the dangerous phenomenon, especially as some misinterpret religious texts to incite violence and promote extremism. He commended the Mirage, which exposes Islamist groups.

Walter Damen, Belgian lawyer and a specialist in combating terror and extremism, talked of the importance of courage in fighting extremism. He is convinced we must seriously think about how to address extremism and stressed that discussions and logical dialogue would lead to change. Dr. Marc Cools, Professor of Criminology, Law and Security Studies at Ghent University, stressed the important role universities play in curtailing extremism. He called for a legal and humanistic approach to face the scourge. He joined Prof. Martijn de Koning, Professor of Anthropology at the University of Amsterdam, and Prof. Werner de Saeger, lecturerat the University of Cambridge, in praising the Mirageas a good example in this regard.

Mr. Koen Metsu, Member of the Belgian Chamber of Representatives, underscored that extremism is an outdated concept and that many Muslims have been victims of Islamist extremists. He called for tireless efforts to halt extremism and bring extremists back onto the right path. Metsu also called for renewing religious discourse and commended the importance of The Mirageas a pioneering intellectual contribution in addressing extremist ideologies. Dr. Brahim Laytouss, Director of the European Development & Research Academy in Ghent, called for concerted efforts, and investment in intellectual efforts in the face of extremist ideologies, which represent a real threat to communities. He highlighted the importance of The Mirageas an example to be followed within intellectual efforts to fight extremism.

The conference concluded with a film about TheMiragefollowed by a discussion by Jean Valere Baldacchino, President of the Geopolitical Research and Analysis Circle, who stressed the intellectual and enlightening aspects of the book. He also discussed ways to use the book to spread awareness about the danger of Islamist extremist groups that exploit religion for dubious political ends.