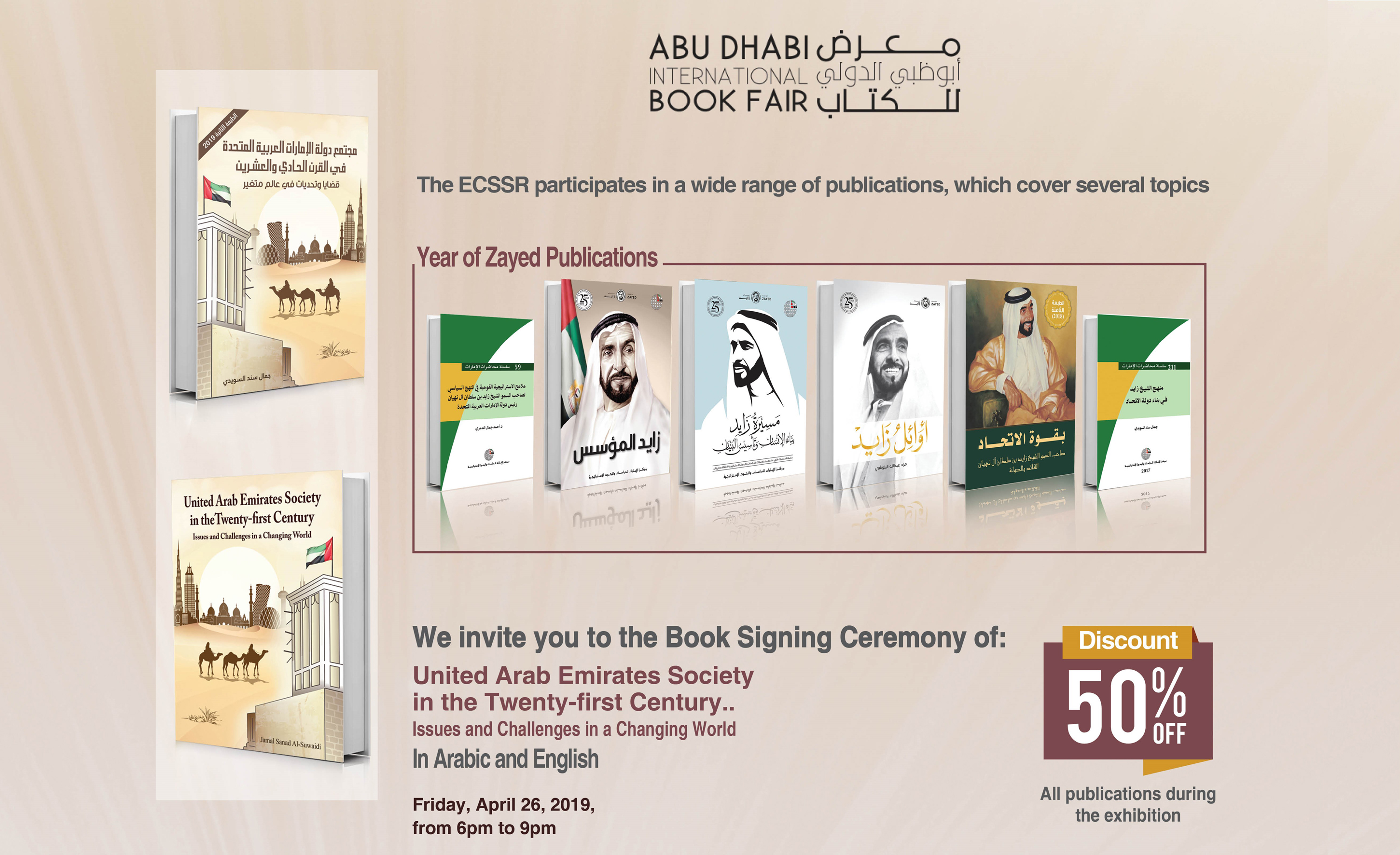 As part of its commitment to promoting a culture of reading in society, the Emirates Center for Strategic Studies and Research (ECSSR) is participating in the 29th Edition of the Abu Dhabi International Book Fair, which takes place from April 24-30, at Abu Dhabi National Exhibition Centre. At its pavilion, No.12E30 in hall 12, the ECSSR will present a wide collection of publications, and is offering a 50 percent discount on all its publications throughout the fair. The ECSSR’s participation in Abu Dhabi International Book Fair this year is very special, as it coincides with its Silver Jubilee celebrations, marking twenty-five years since the Center was established.

The ECSSR pavilion will also host a book signing for United Arab Emirates Society in the Twenty-First Century: Issues and Challenges in a Changing World, by His Excellency Prof. Jamal Sanad Al- Suwaidi, Director General of the ECSSR. The signing takes place on Friday, April 26, from 6pm to 9pm. In Arabic and English, the book examines major global transformations and includes a study of UAE society set against the context of a changing world. Its comprehensive perspective tackles a range of considerations, from political, security and economic, to social, cultural and technological aspects.

Commenting on the ECSSR’s participation in the Abu Dhabi International Book Fair, His Excellency Prof. Jamal Sanad Al-Suwaidi, Director General of the ECSSR said: “Since its inception, the Center has been keen to participate in cultural events to present its latest publications in various fields, which are considered a reliable source for researchers, intellectuals and readers.

“After a quarter of a century of continuous hard work, each and every one of the Center’s publications represents a deliberate step toward defining the future. This confirms our active contribution to promoting a culture of reading, which enhances the reader’s own library and knowledge.”

His Excellency added: “We are proud to participate in the Abu Dhabi International Book Fair. It represents a cultural and intellectual platform for visitors, allowing them to access and acquire various types of books and scientific research, whether for professional success, cultural engagement or simply to satisfy a passion for knowledge. We look forward to participating in future editions of the Abu Dhabi International Book Fair.”

Other insightful publications include Mohamed bin Zayed and Education, which sheds light on the profound vision for education of His Highness Sheikh Mohamed bin Zayed Al Nahyan, Crown Prince of Abu Dhabi and Deputy Supreme Commander of the UAE Armed Forces (may God protect him). The book details His Highness’ vision for developing the education process in the UAE, and his creative approach to enhancing the role of the educational system in promoting comprehensive and sustainable development to ensure the UAE’s bright future. Events that Changed History, by His Excellency Prof. Jamal Sanad Al-Suwaidi, Director General of the ECSSR, considers major events that have changed the course of history, regionally and worldwide, and which still impact our lives today. The Secret!? There is No Secret, by Dr. Khaled Jamal Al-Suwaidi, Executive Director of the ECSSR also adds to the impressive collection of books, series and periodicals issued by the Center.

Abu Dhabi International Book Fair is held on an annual basis and is considered an outstanding intellectual and cultural platform for publishers, book vendors, agents, cultural organizations and the media, aimed at presenting books, publications and encouraging the exchange of ideas.

His Highness Sheikh Mohammed bin Rashid Al Maktoum, Vice President and Prime Minister of the UAE and Ruler of Dubai (may God protect him) has honored the Tolerance and...
Copyright © ECSSR 2021 All rights reserved | Terms and Conditions | Privacy Policy | Disclaimer | Accessibility