The Emirates Center for Strategic Studies and Research Honors Dr. Khaled Al-Suwaidi for the Success of His Abu Dhabi-Makkah Run Initiative

The Emirates Center for Strategic Studies and Research Honors Dr. Khaled Al-Suwaidi for the Success of His Abu Dhabi-Makkah Run Initiative 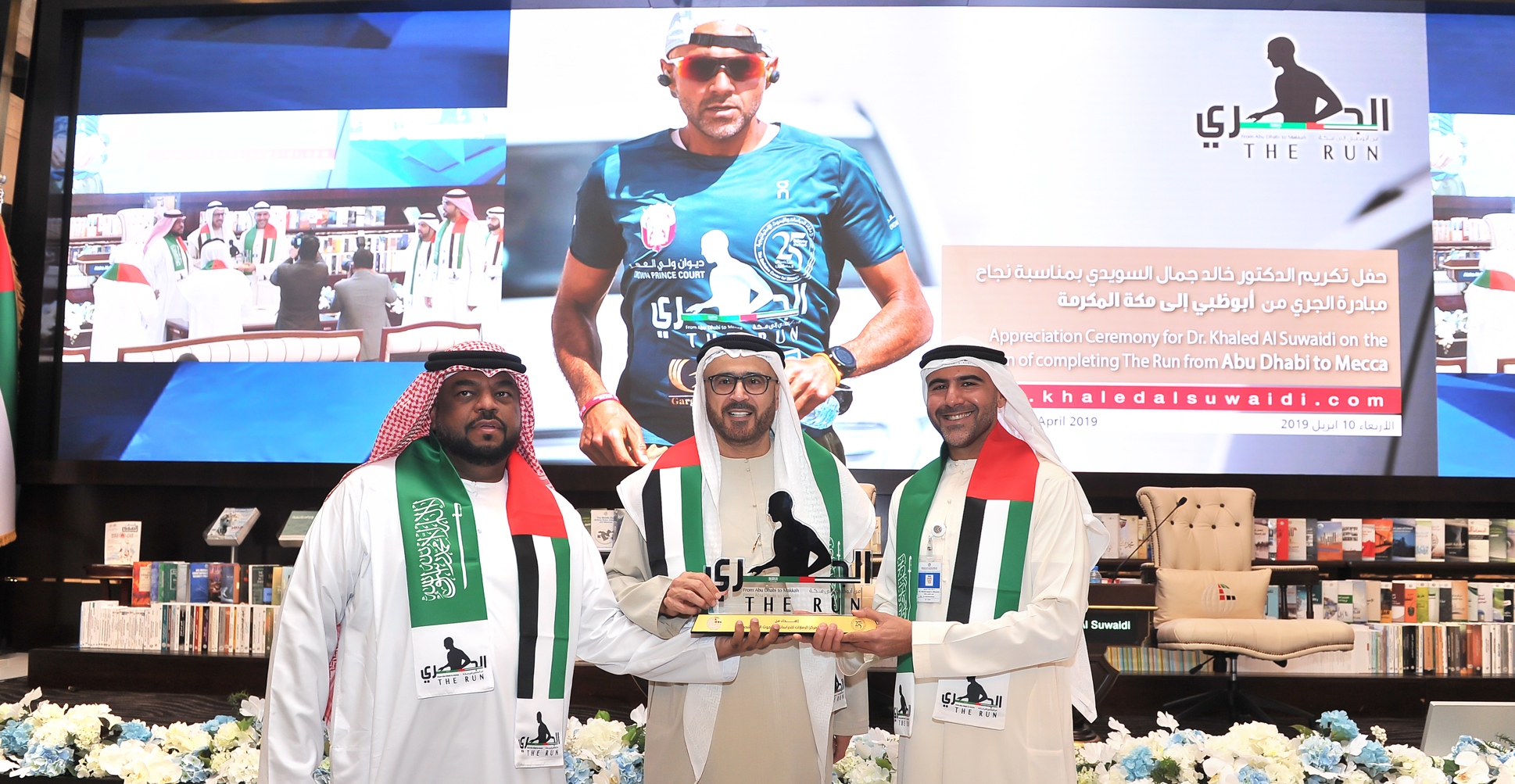 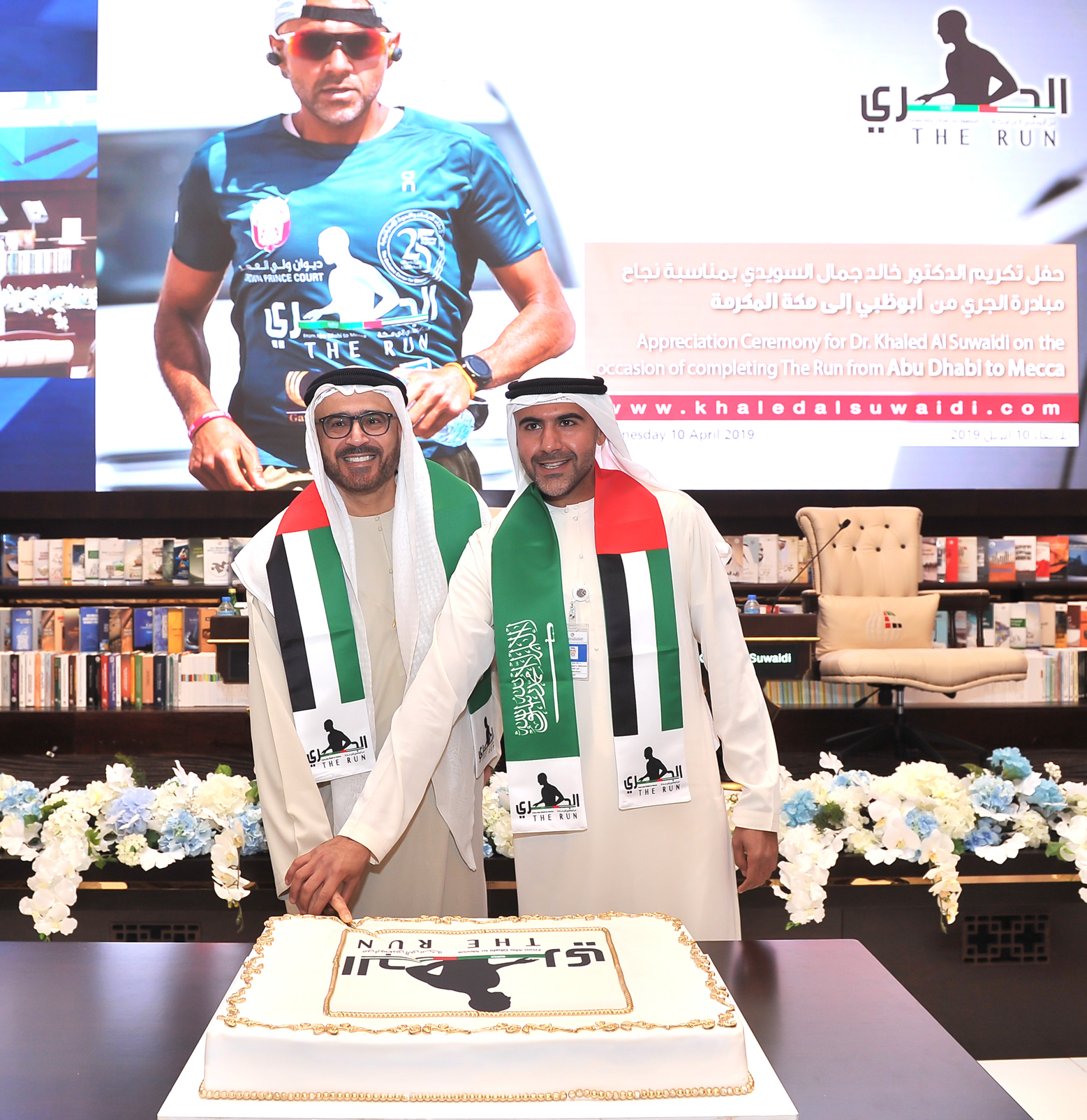 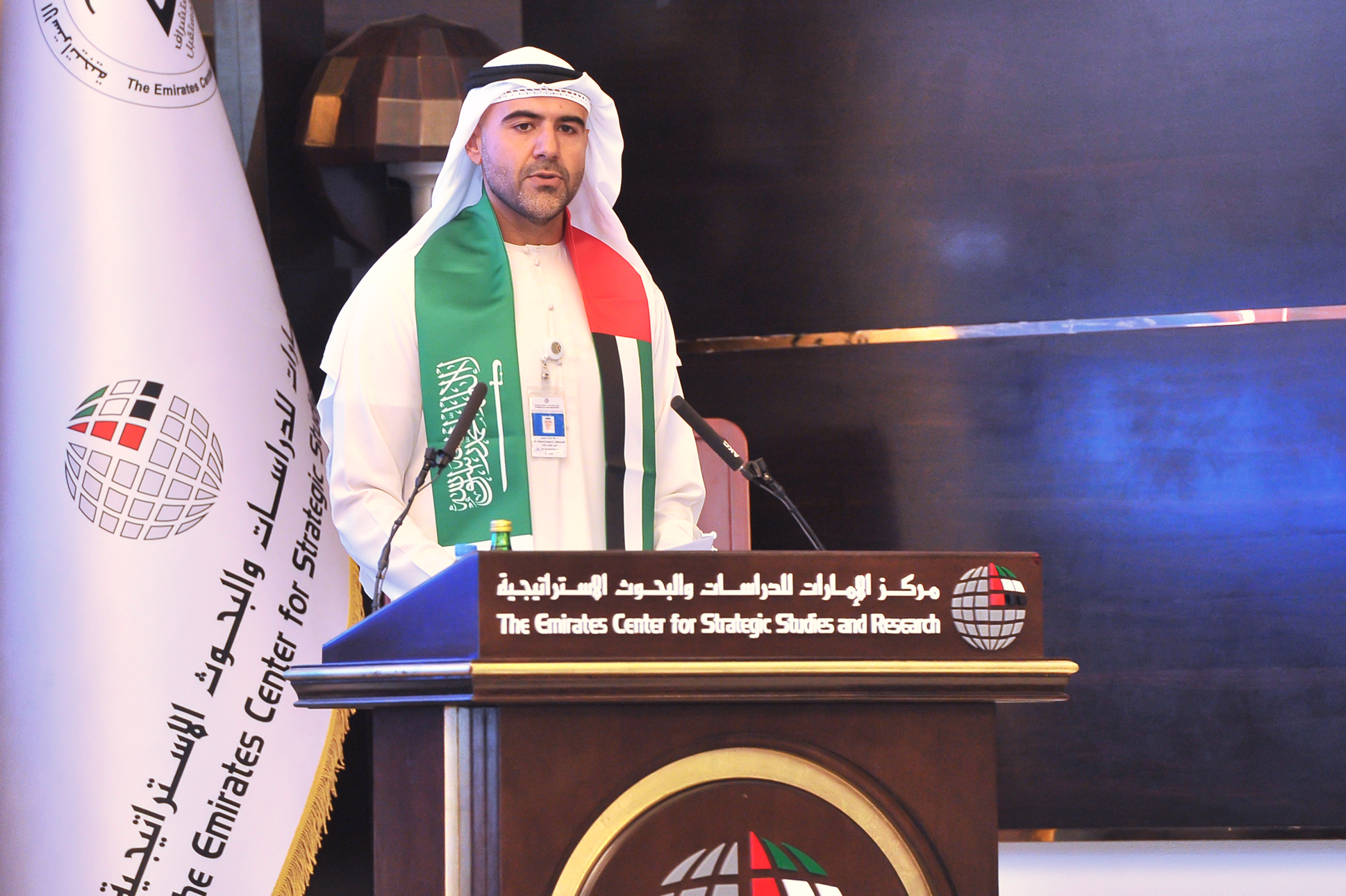 On Wednesday, April 10, 2019, the Emirates Center for Strategic Studies and Research (ECSSR) organized an honoring ceremony for Dr. Khaled Jamal Al-Suwaidi, Executive Director of the ECSSR, on the occasion of the success of his extraordinary Abu Dhabi-Makkah Run, during which he managed to complete 2070 kilometers of continuous walking and running. The event was held in the Sheikh Zayed bin Sultan Al Nahyan Hall, at the ECSSR office complex in Abu Dhabi.

The event started with the UAE national anthem, followed by the welcoming remarks of His Excellency Prof. Jamal Sanad Al-Suwaidi, Director General of the ECSSR. Al-Suwaidi expressed how proud he was of his son,  “As a father, I am very proud of my son and his achievement, because he managed to complete an unprecedented challenge. He also has shown keenness to create ideas and initiatives that hoist the UAE flag everywhere. He has spread among young women and men the UAE leadership’s strong values and continuous efforts to promote the culture of solidarity, love, and fraternity.”

Following the welcoming remarks, a documentary about the Abu Dhabi-Makkah Run was presented. It showed the timeline of the initiative and the amount of effort and patience Dr. Khaled exerted during the 29-day trip, which was scheduled for 38 days. The documentary also showed the amount of support, solidarity, and interaction given by the Saudi people regarding this initiative.

After his father awarded him a medal in recognition for completing the run, Dr. Khaled delivered a speech, in which he thanked his father, who he said had a great influence on his life. Dr. Khaled said that the honoring ceremony was not to celebrate only what he had achieved, but it was also to honor the ECSSR and its employees who had made great achievements, as the Center heads into its twenty-sixth year.

Dr. Khaled referred to the message he wanted to deliver when he decided to take up the challenge of running from Abu Dhabi to Makkah. He said that he wanted to express his deep appreciation for the brotherly relations between the UAE and Saudi Arabia and for their role as well as the role of the Arab coalition in terms of achieving security and stability. He also wanted to pay respect to the bravery and heroism shown by the fallen soldiers.

Dr. Khaled also spoke about his preparation for the run, which included tough training that gave him an opportunity to learn more about his character and mental strength.

He said that as an Emirati citizen, he had learned so much from the UAE leadership. He said that the leadership teaches that nothing is impossible and that hard work and the ability to face difficulties are essential for progress and development.

At the end of his speech, Dr. Khalid said that the run initiative represented everything he learned during his youth when he witnessed the achievements of his beloved country. He pointed out that he was inspired by the relentless will of his father, who instilled in him the willingness to achieve his goals. He said that he wanted to return the favor to society through an experience that reflected the meaning of relentless determination and hard work and that demonstrated that anything is possible.

After Dr. Khalid’s speech, the audience discussed Dr. Khalid heroic achievement.  They said that he had become a positive role for others who wish to lead more active lives and that he had shown that with persistence, patience, and a strong will anyone can overcome obstacles and meet seemingly “impossible” challenges.