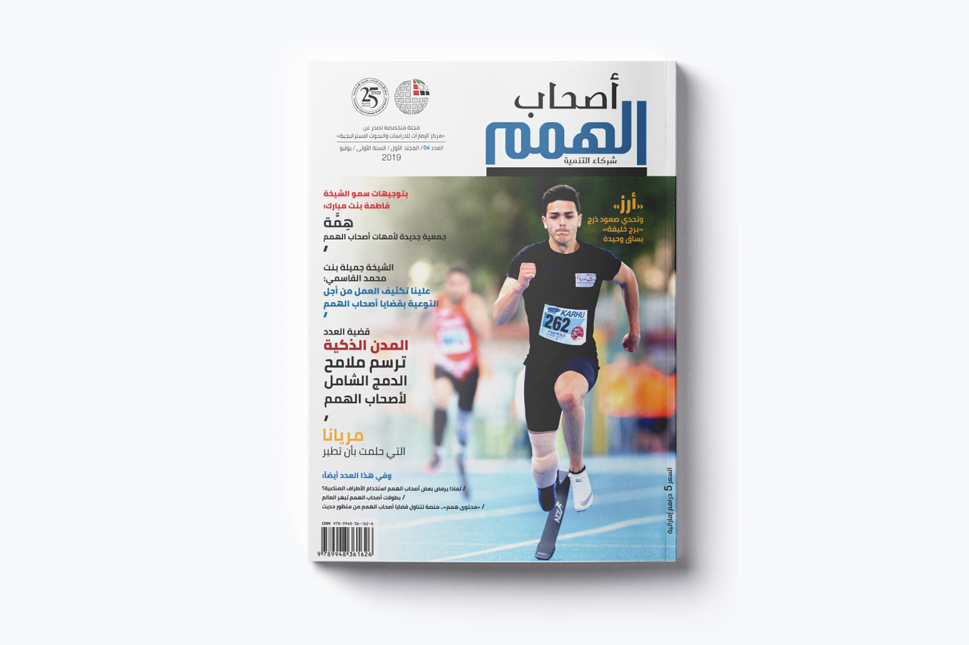 The Emirates Center for Strategic Studies and Research (ECSSR) has released the fourth issue of the ‘People of Determination’ magazine, which is concerned with all subjects pertaining to this category of people in the UAE and the Arab world. The publication is considered the first platform of its kind for effectively conveying the voice of the people of determination and their families to society. The magazine delves into their ambitions, realities, and challenges as they experience life in the UAE and beyond.

This issue features an editorial by H.E. Prof. Jamal Sanad Al-Suwaidi, Director General of the ECSSR, titled the “The Meeting of the People of Determination.” In this article, he highlights the meaning and significance of a People of Determination meeting held on March 19, 2019 that witnessed the participation of His Highness Sheikh Mohammed bin Rashid Al Maktoum, Vice President and Prime Minister of the UAE and Ruler of Dubai, (may God protect him), and his brother His Highness Sheikh Mohamed bin Zayed Al Nahyan, Crown Prince of Abu Dhabi and Deputy Supreme Commander of the UAE Armed Forces, (may God protect him). During the meeting, Ms. Amal Al-Ahmadi, editor-in-chief of the magazine, touched on the bullying issue that many people of determination experience and its societal implications, as well as the informed and decisive move of the concerned UAE authorities to address this issue and contain its effects.

The issue also refers to the UAE’s launch, through its 2020 strategy, of the project “Accessible Environments for Persons with Disability,” which seeks to set high standards and principles for the comprehensive cities. The project will be conducted in cooperation with the General Secretariat of the Executive Council, the Community Development Authority, the Roads and Transport Authority, Dubai Municipality, as well as many property developers who are looking forward to transforming the entire city of Dubai into a friendly city for all people.

The issue includes an interview with H. H. Sheikha Jameela bint Mohamed Al Qasimi, Director General of Sharjah City for Humanitarian Services, in which she points to the beginnings of the institution’s activities and prominent future projects.

Within its different sections, this publication offers success stories of people of determination in the UAE, Kingdom of Saudi Arabia, Jordan, Egypt, and Lebanon and how they overcame their obstacles and difficulties.

As usual, the ECSSR has taken great strides to ensure that the People of Determination magazine is accurate and adheres to academic norms and quality, in term of design and content. This is to preserve its creative excellence and to fulfil its humanitarian and scientific message for the benefit of all readers.