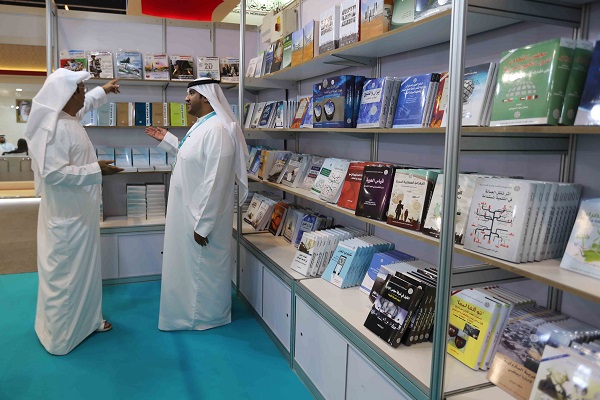 The Emirates Center for Strategic Studies and Research (ECSSR) is taking part in the 26th edition of the Abu Dhabi International Book Fair which takes place in the Abu Dhabi National Exhibition Centre from April 27 until May 3.

On this occasion, the ECSSR will showcase an array of its publications, whose number stands at over 1000. On top the valuable works presented in the stalls of the Center are the magnum opuses of H.E. Dr. Jamal Sanad Al-Suwaidi, Director General of the ECSSR, including his recent book Eternal Imprints: Figures that Made History and Others that Changed the Future of their Countries. Available in Arabic and English, this book sheds light on the lives and legacies of 22 international leaders who left lasting imprints in their countries and beyond in various fields ranging from politics, economy and  development to thought and sciences. Through highlighting the lofty stands, achievements, creativity, ingenuity and the strong willingness and positive values of these leaders, the book aims at showing inspiring examples and lessons to future generations to help them lay strong foundations in the face of current challenges and crises.

The Mirage also features prominently in the ECSSR stand in the fair. This recipient of the 2015 Sheikh Zayed Book Award in the category of Development and State Building is another acclaimed work of H.E. Dr. Jamal Sanad Al-Suwaidi. Since its publication, The Mirage drew particular attention and appreciation at the local, regional and international levels. Thanks to its thorough analysis, the book won commendation by researchers and academics from different cultural and intellectuals milieus.

The Mirage examines the issues relating to political Islam and debunks the political mirage that political religious groups sell to Arab and Muslim peoples. It exposes their attempts at using the religion of Islam to achieve narrow political and personal purposes and calls for restoring the role of the intellect, Ijtihad, thought and meditation. It also advocates following the genuine percepts of religion that are in line with lofty values.

The Center will also present fair visitors with a book offering a comparative study on education conditions in some Gulf countries. Entitled Education and Educators: Towards a Culture of Excellence at Schools, this book tackles the factors that are required to develop the role of the educator and deals with the impediments and the opportunities relating to achieving excellence.

The stalls of the ECSSR also include the arabic translation of Close Protection – A Closer Observation of the Protection Equation, which lays out specificities and provides insight on the tactical doctrines relating to personal protection. It also reviews a set of approaches used in close protection and gives guidance on best practices to achieve tactical advantage. The target audience of this book are obviously security practitioners in the public and private sectors, including bodyguards and instructors. It can also be useful to institutions or schools specializing in training close protection professionals.

The Center will also present the Fair goers with another recently published book: The Middle East, Transformations in Roles, Interests and Alliances. In seven chapters, the book analyses the main factors and aspects characterizing the changes in regional dynamics in the Middle East. The book tackles the strategic and security conditions and discusses their repercussions along with providing policy options. This thorough analysis is permeated with an approach that analyses the present whole anticipating the uncertain future through assessing complex future scenarios.

The participation of the ECSSR in the Abu Dhabi International Book Fair has been a long tradition that the Center has been keen to uphold with a view to contributing to the success of this annual cultural event. The Center’s participation is also meant to reinforce communication with intellectuals, researchers and visitors of the Fair which brings together authors and their readers in a way that promotes reading and culture within society.