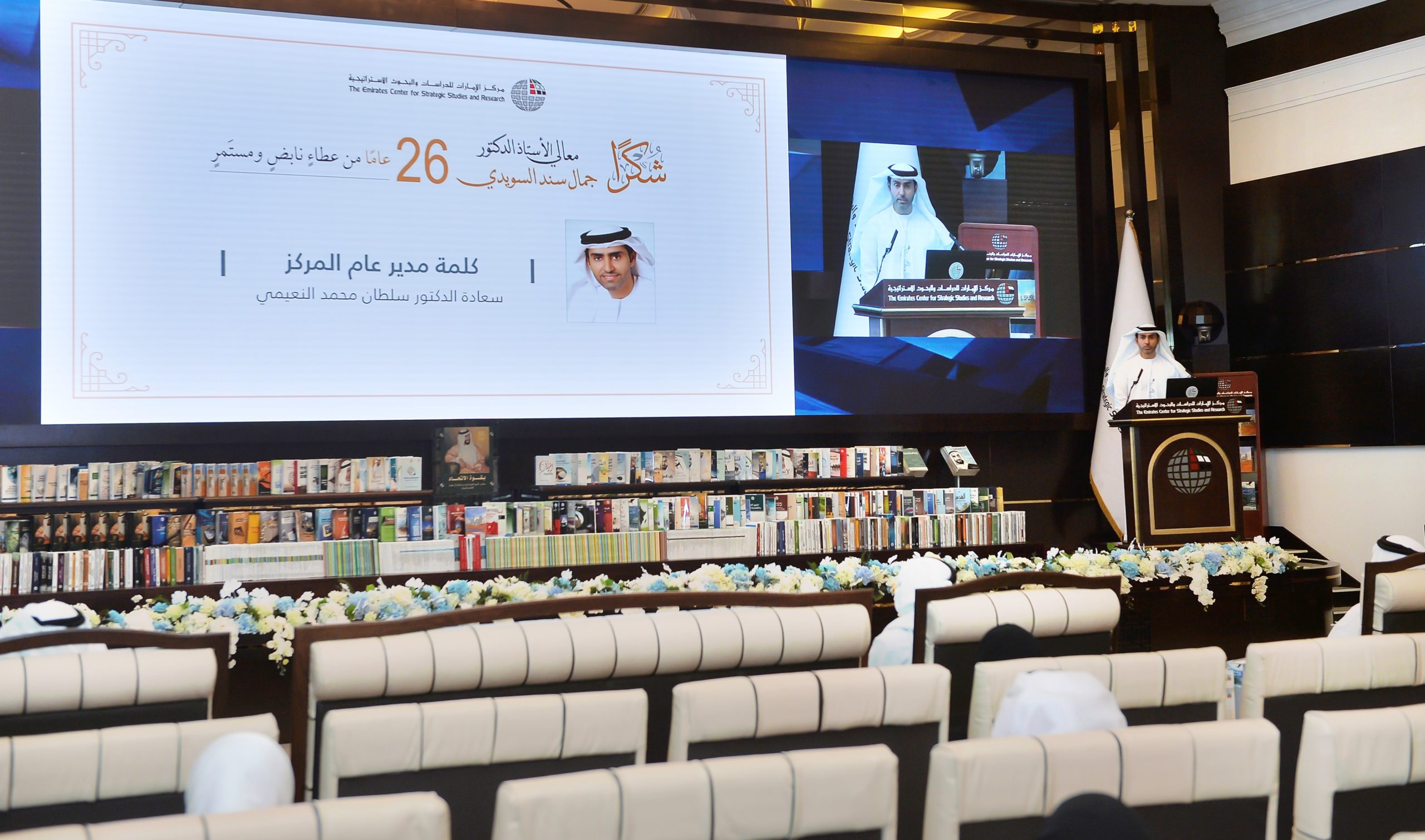 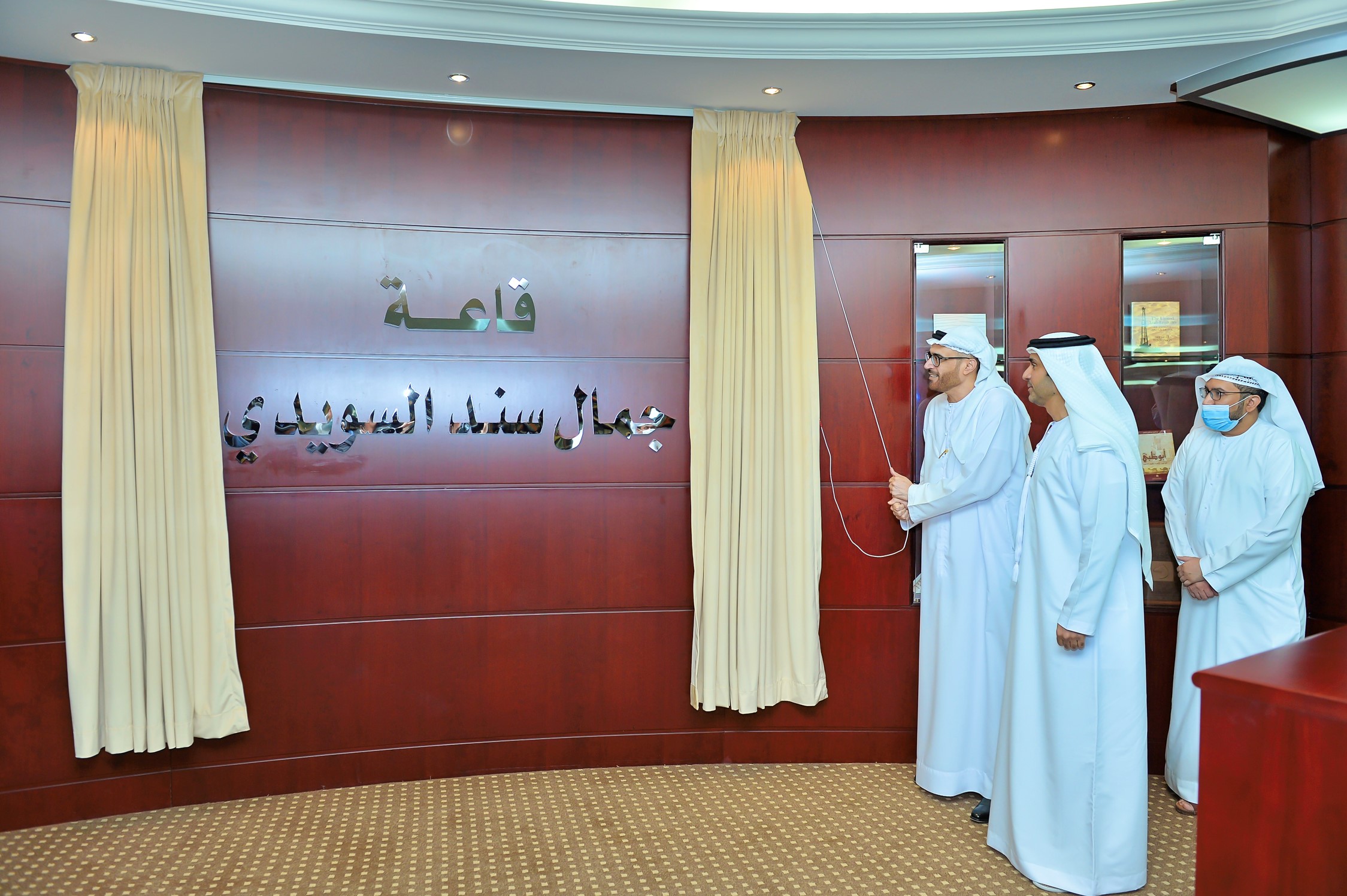 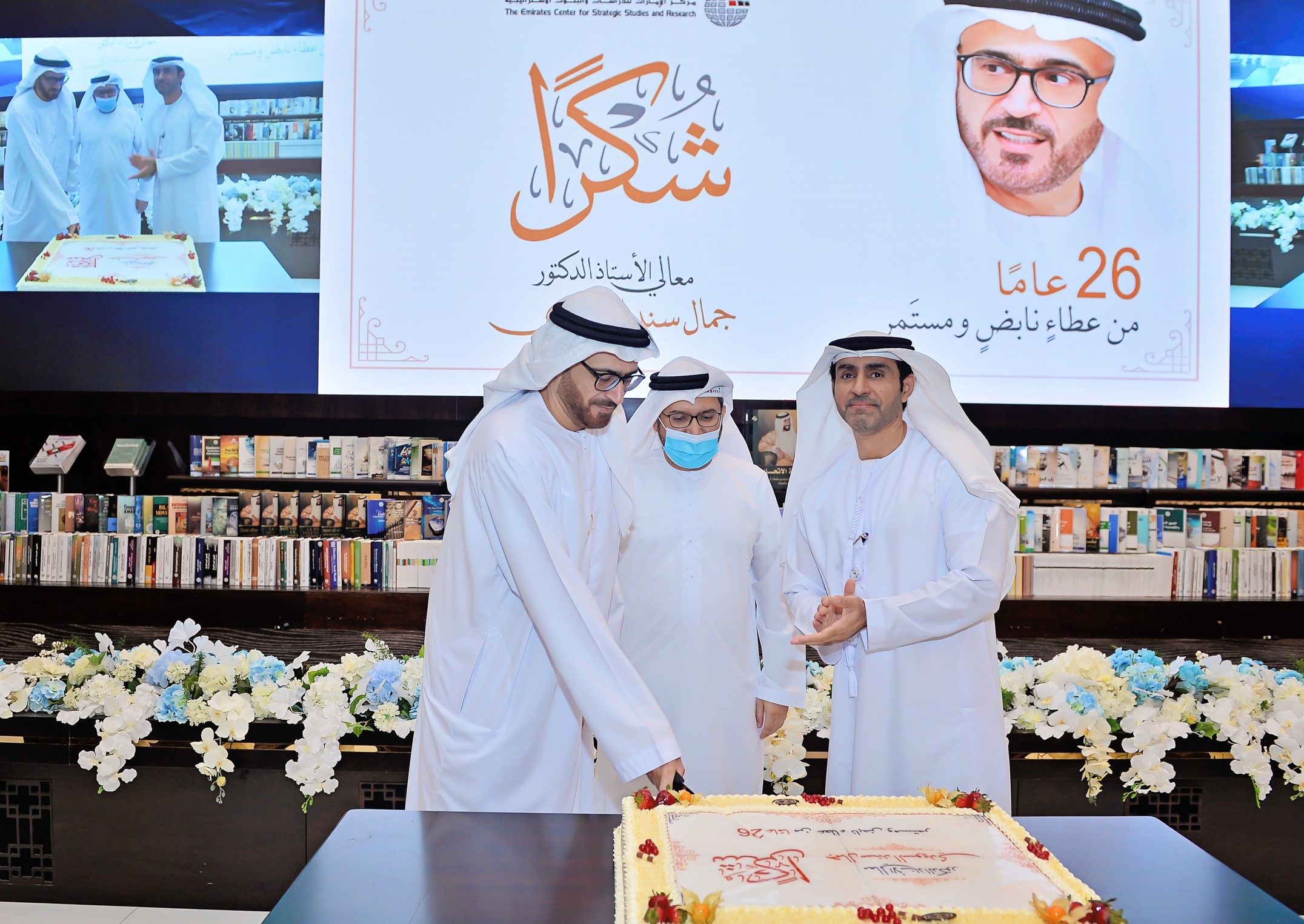 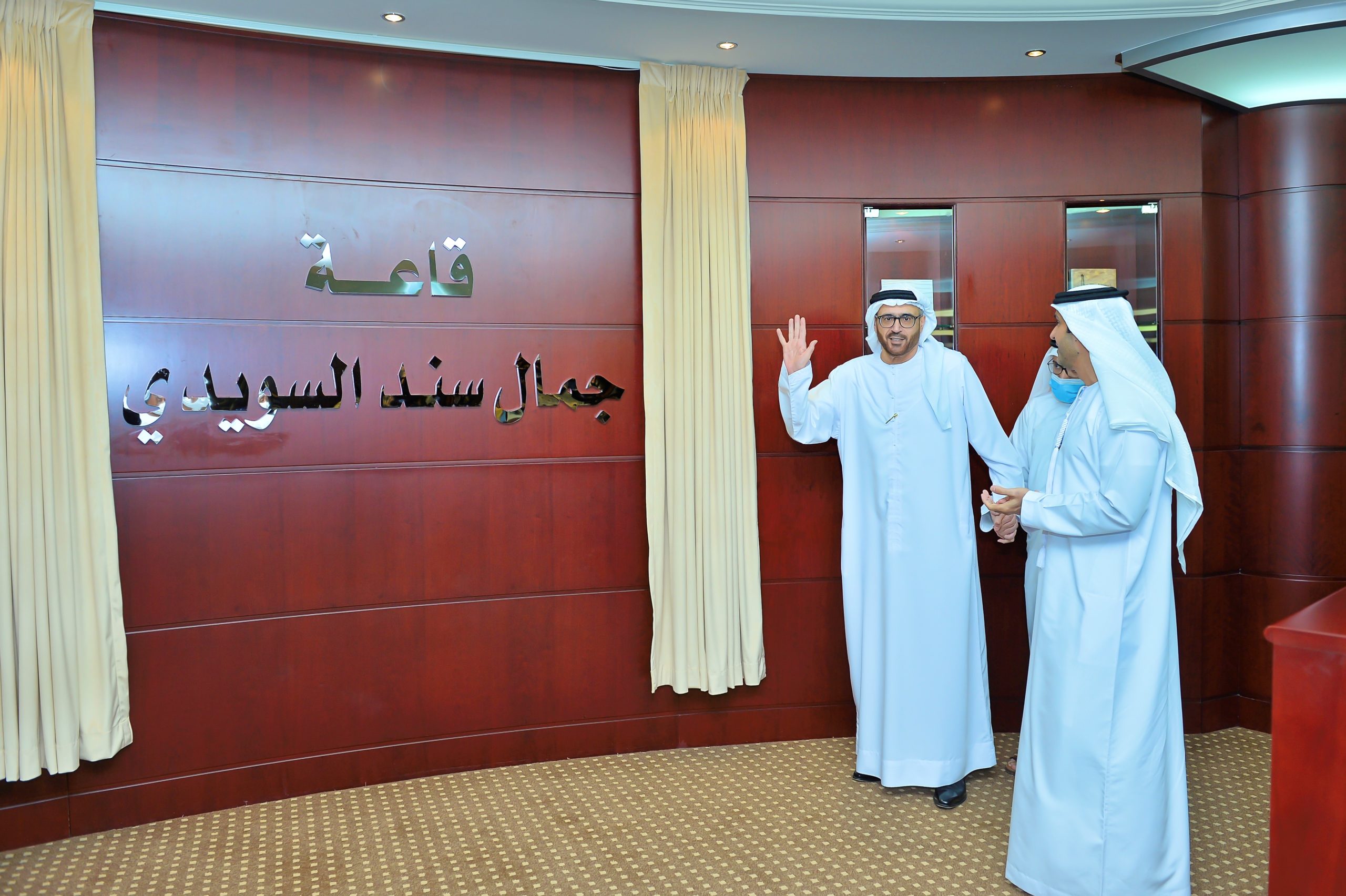 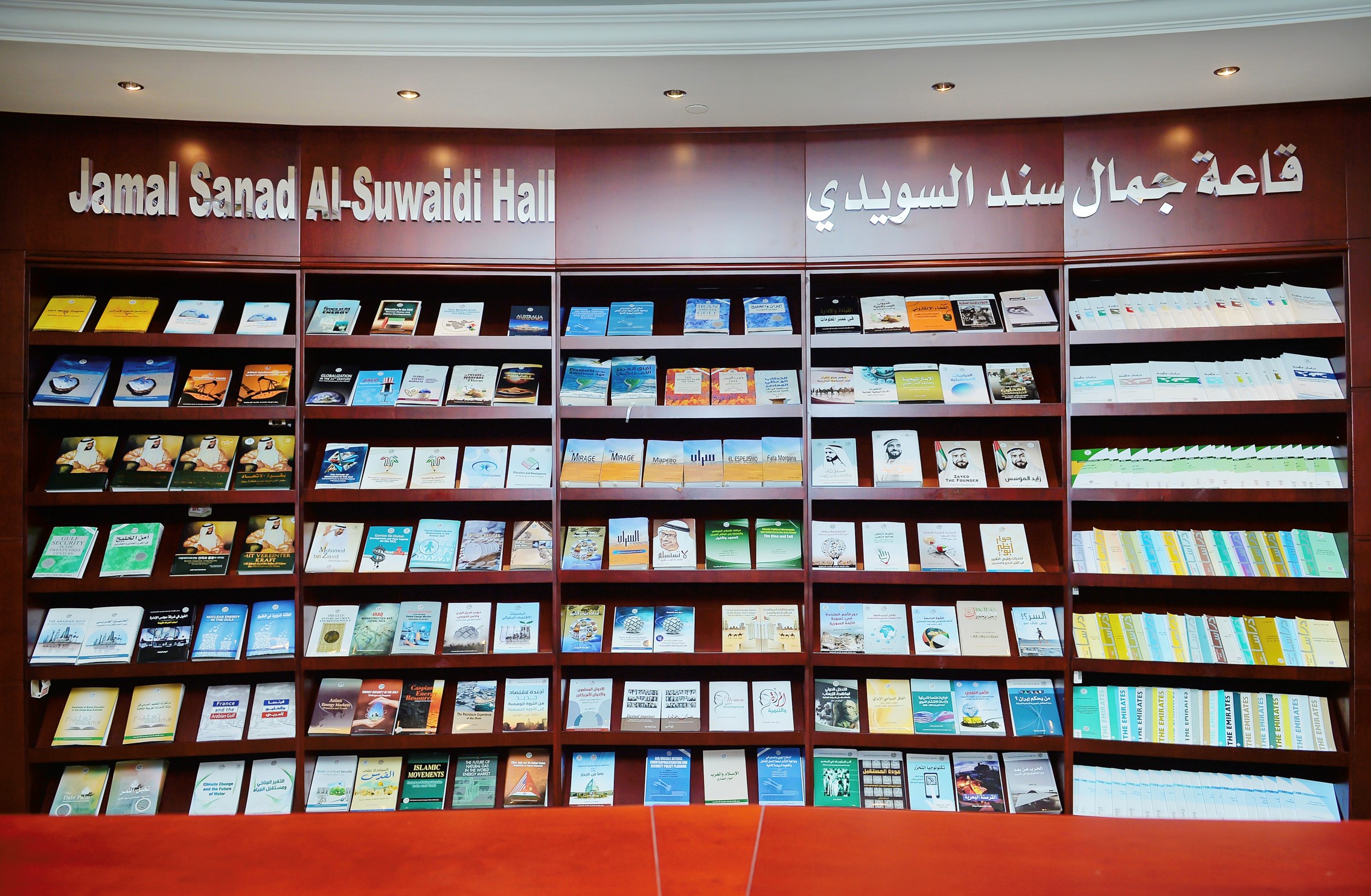 On Thursday, October 8, 2020, the Emirates Center for Strategic Studies and Research (ECSSR) paid tribute to H.E. Prof. Jamal Sanad Al-Suwaidi, Deputy Chairman of the Board of Trustees and former Director General of the ECSSR. The Center expressed its thanks and gratitude for all his efforts, which contributed to advancing the Center’s performance and enabled it to assume a prominent position in all areas of scientific research, delivering the future, regionally and globally.

The ECSSR organized a ceremony titled ‘Thank You, Your Excellency Prof. Jamal Sanad Al-Suwaidi: 26 Years of Dynamic and Consistent Contribution’, in the Sheikh Zayed bin Sultan Al Nahyan Hall, at the Center's premises in Abu Dhabi.

The ceremony began with a short video, highlighting the achievements of H.E. Prof. Jamal Sanad Al-Suwaidi, and the awards he has received during his scholarly and professional career. These awards and achievements reflect his great efforts that enriched the work of the ECSSR and consolidated its position among national, regional and international think tanks since the Center’s establishment in 1994.

During the ceremony, H.E. Dr. Sultan Mohammed Al-Nuaimi, Director General of the ECSSR, delivered a speech conveying the deep appreciation and gratitude of the ECSSR management and staff to H.E. Prof Jamal Sanad Al-Suwaidi, for his work in establishing the Center and providing the required competencies that contributed to its distinction and advancement as a leading institution among strategic studies centers, regionally and globally. H.E. Al-Nuaimi stressed that the values of hard work, discipline and objectivity will remain guiding pillars in the Center’s endeavor to consolidate its remarkable achievements, and explore new horizons of development. This will support the vision of the UAE’s wise leadership, led by His Highness Sheikh Khalifa bin Zayed Al Nahyan, President of the UAE (may God protect him), and His Highness Sheikh Mohamed bin Zayed Al Nahyan, Crown Prince of Abu Dhabi and Deputy Supreme Commander of the UAE Armed Forces (may God protect him).

H.E. Al-Nuaimi said that this well-deserved tribute to H.E Prof. Jamal Sanad Al-Suwaidi is in line with the culture of tribute established by the UAE’s wise leadership, which has entrenched the values of gratitude and appreciation for all those with an outstanding legacy in supporting the nation's holistic development and journey toward excellence. The aim is to recognize their contributions in building and enabling the UAE to reach its rightful leading place among nations.

The ECSSR’s employees also voiced their appreciation to H.E. Prof. Jamal Sanad Al-Suwaidi, stressing that paying tribute to His Excellency has deep meaning for them, making the event a moment filled with emotions that are difficult to articulate. The employees emphasized that the success achieved by the Center is thanks to its wise and insightful management, led by H.E. Al-Suwaidi for more than 26 years, during which he devoted himself to fulfilling the duty to which he has dedicated his life.

H.E. Dr. Sultan Mohammed Al-Nuaimi presented a shield of honor to H.E. Prof. Jamal Sanad Al Suwaidi. Upon the direction of H.E. Al-Nuaimi, and at the proposal of all the Center’s staff, the UAE Federation Library’s VIP Hall at the ECSSR was named after Jamal Sanad Al-Suwaidi. This hall hosts valuable and rare collections of books and special collectibles, as well as a collection of documents, maps and atlases. It is a key stop for visits to the ECSSR by heads of state, heads of government, ministers, official delegations and other VIPs. Dialogue sessions with leading intellectuals, researchers and writers in various fields are also held in this hall.

On Wednesday, September 16, 2020, the Emirates Center for Strategic Studies and Research (ECSSR) organized lecture 757, titled ‘US Elections and Their Implications for the Middle East’, delivered by...
Copyright © ECSSR 2022 All rights reserved | Terms and Conditions | Privacy Policy | Disclaimer | Careers