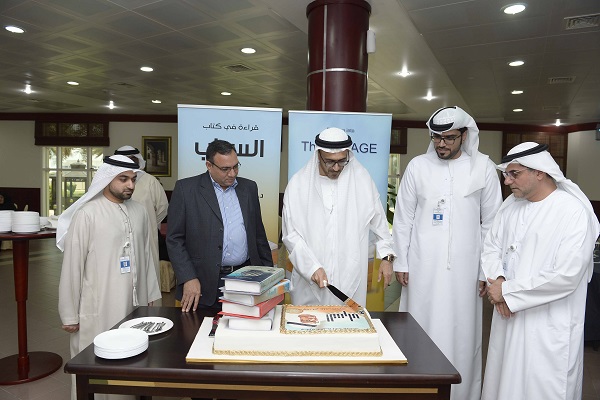 The Emirates Center for Strategic Studies and Research (ECSSR) organized, on Wednesday afternoon, May 4, 2016, a ceremony to congratulate H.E. Dr.Jamal Sanad Al-Suwaidi on winning the 2015/2016 Sheikh Zayed Book Award in its tenth edition in the category of “Contribution to the Development of Nations” for his book The Mirage.

During the ceremony, held in the Sheikh Zayed bin Sultan Al Nahyan hall in the Center’s headquarters in Abu Dhabi, the ECSSR staff expressed pride and rejoiced at the receipt of H.E. Dr. Jamal Sanad Al-Suwaidi of such a distinction with great symbolic and academic value. They highlighted that such an esteemed award represents a recognition of the valuable contributions of His Excellency the Director General of the ECSSR in the arenas of thought and knowledge which earned him local, Arab and international acclaim.

On the same occasion, the ECSSR employees said that the prestigious award comes as a salute to the remarkable accomplishments of H.E. Dr. Jamal Sanad Al-Suwaidi during his prolific academic and research career, which was dedicated to enrich the intellectual and cultural scenes in the UAE, the Arab World and beyond.

The Ceremony was also an opportunity for the employees to reiterate their commitment to spare no effort in order to maintain the Center’s unique place as a vibrant source of creativity, thought and knowledge in tandem with the progress and the development in our beloved country.

For his part, H.E. Dr. Jamal Sanad Al-Suwaidi expressed his great joy at receiving the Sheikh Zayed Book Award, saying: “this Award has special place in my heart, because it bears the name of late Sheikh Zayed bin Sultan Al-Nahyan -may God bless his soul- who has always been an role model for future generations inspiring values of loyalty and belonging to our beloved homeland. He instilled in us the love for reading, education and perseverance in seeking science and knowledge because he- may God bless his soul- believed that building the nation requires minds that think and innovate in all field.”

H.E. Dr. Jamal Sanad Al-Suwaidi went on to say: “although I received before several prizes in the field of culture and thought from different eminent international institutions and universities, the Sheikh Zayed Book Award will keep a special place in my heart, because it is a source of pride for every Emirati, notably as it has become the most distinguished and diversified award in the fields of culture and literature compared with other Arab or international awards.”

His Excellency Dr. Jamal Sanad Al-Suwaidi, Director General of the ECSSR, had received the 2016/2015 Sheikh Zayed Book Award in the category of ‘Development of Nations’ for his book The Mirage, at a ceremony on the sidelines of the 2016 Abu Dhabi International Book Fair, held on April 27- May 3.

The Mirage is a study of political religious groups from intellectual, political, cultural, social and faith perspectives. The book discusses the historical context marking the emergence of such political groups in the second decade of the 21st Century and deconstructs the factors that hindered development, enlightenment, modernity and progress leading to widening the gap between the Arab world and the West.