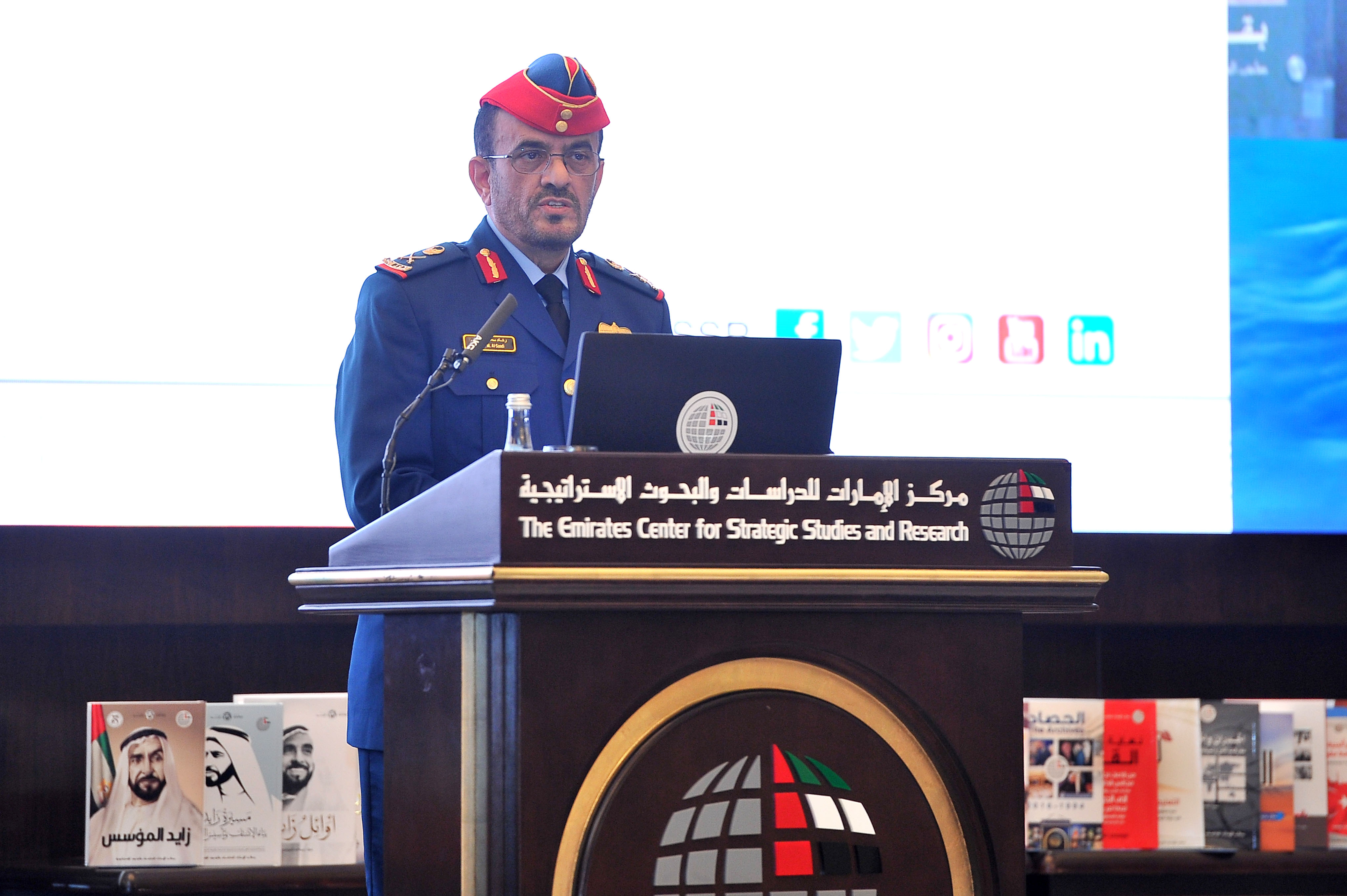 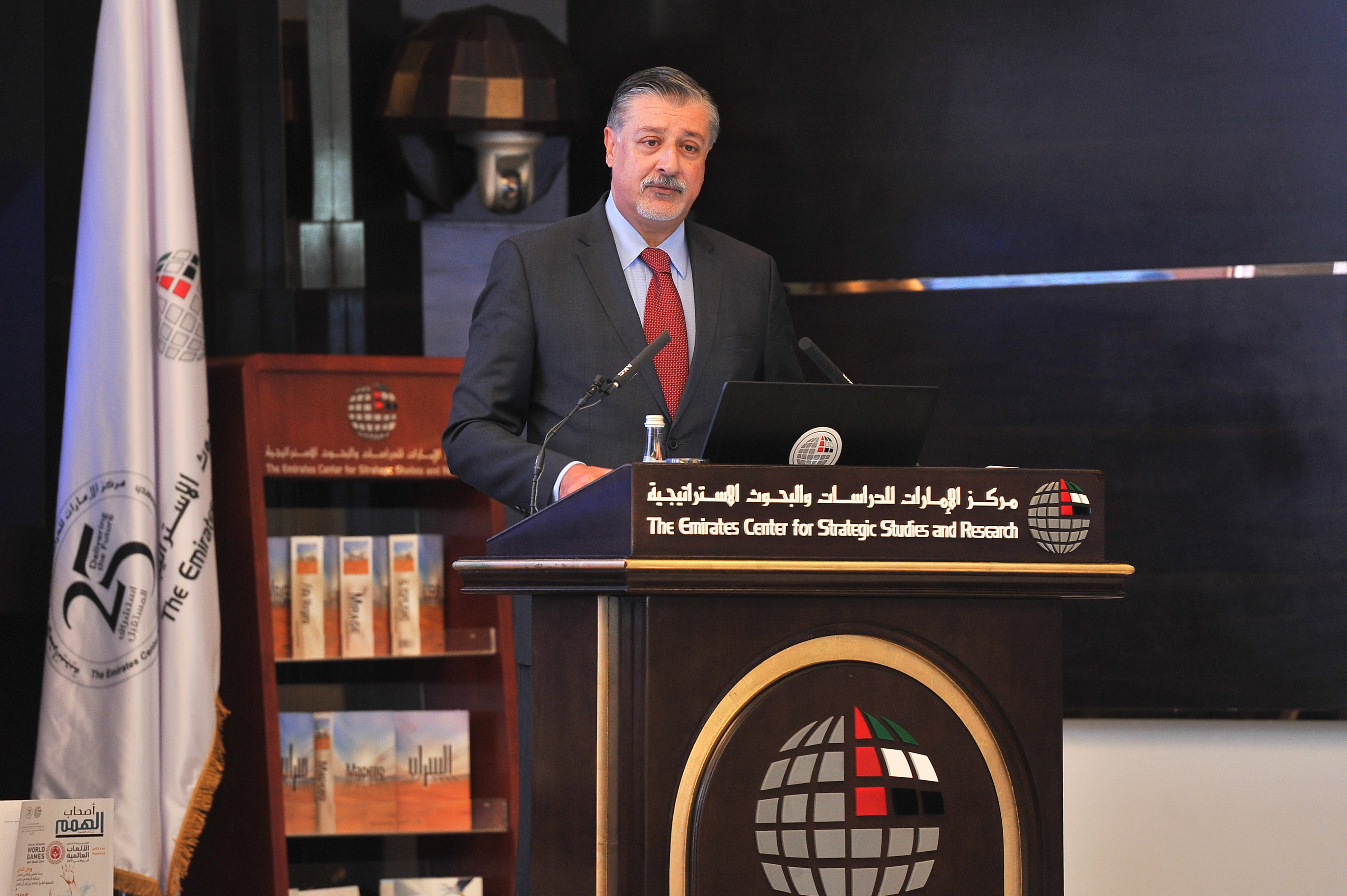 On Tuesday, March 26, 2019, His Excellency Professor Jamal Sanad Al-Suwaidi, Director General of the Emirates Center for Strategic Studies and Research (ECSSR) opened the activities of the 24th Annual Conference entitled: Abu Dhabi Dialogue, “Challenges and Opportunities for Change in the 21st Century.” The conference is being held in Sheikh Zayed bin Sultan Al Nahyan Hall at the ECSSR complex, in Abu Dhabi. The conference, which lasts for two days, is being attended by a number of officials, members of diplomatic missions, an elite group of researchers and academics as well as a number of writers, journalists, and media professionals.

The welcoming remarks were given by His Excellency Professor Jamal Sanad Al-Suwaidi, Director General of the ECSSR. He confirmed that this year’s conference reflects the Center’s awareness of the increasing importance of identifying future challenges and opportunities. He said that the aim of the event is to explore policies and ideas that can effectively address these issues to provide recommendations that support UAE decision makers.

Al-Suwaidi said that the Center included in the conference agenda topics and issues that have a big impact in forming the global future. These include two issues that are especially important in the Arab World: (1) national identity in light of global changes, and (2) change and the future of the Arabic language.

Al-Suwaidi confirmed that the rapidly evolving developments facing the world today force us to take the necessary preparations, in advance, to deal with future opportunities and challenges, through effective strategic planning.

His Excellency said that he was confident that the conference, with its unique agenda and elite group of participants, would present an in-depth review of future challenges and of opportunities for change. He said that he was hopeful that the conference would produce important suggestions and recommendations that will help decision-makers to deal with these challenges and to benefit from future opportunities.

Following the welcoming remarks, H.E. Maj. General Staff Pilot Rashad Mohammad Al-Sa’adi, Commandant of National Defense College, United Arab Emirates, delivered the keynote address. He stressed that the Center’s 24th annual conference includes remarkable sessions that draw a realistic present and future. The conference, he said, will put in place important pillars for reviewing and preparing strategic policies and plans to aid decision makers. He added that there is a need to assess and analyze the strategic environment that intersects the reality of the material and human resources. He pointed out that the conference provides the ways and means to achieve planned goals, in light of technological advancements and international competition. He said that the world is being run by major powers through employing and using renewable and modern strategic tools and mechanisms.

Al-Sa’adi pointed out that the strategic security environment is facing several unprecedented challenges and difficulties. He said, however, that promising opportunities are taking shape that herald a prosperous future to all countries seeking to benefit from these opportunities.

He confirmed that the changes the region and the world are witnessing now call for concerted efforts from governments, organizations, think-tanks, and individuals to control the most dangerous impacts of these changes. This can only be achieved, he said, by gradually abandoning outdated polices and by working together to allocate sufficeint resources and to  prepare mid- to long-term plans.

Following the keynote speech, Panel I, titled Modern Technology and the Future of Energy, chaired by Dr. Ebrahim Al-Hajri, Vice Chancellor of the Emirates College of Advanced Education (ECAE), United Arab Emirates, began with a talk by Dr. Steven Griffiths, Senior Vice President – Research & Development, Professor of Practice in the United Arab Emirates. Griffiths discussed technology and the future of fossil fuels, noting that  the global energy mix has been dominated by fossil fuels for decades with relatively little variation. However, this situation is now beginning to change as the rapid development of new technologies paves the way for an energy future that is much more reliant on low-carbon energy sources. He added that although fossil fuels will continue to play an important role in our future energy system, the rise of a cleaner, more distributed and digitally enabled energy system is inevitable.

In the same panel, Mr. Adnan Amin, Director General of the International Renewable Energy Agency (IRENA) in United Arab Emirates, discussed prospects for development in the field of renewable energy. He explained that the global energy landscape is witnessing rapid change driven by the unprecedented growth of renewable energy, as the continuous cost reductions and innovations are strengthening the business case for renewable energy, which has become a mainstream source to meet growing energy demands.  He added  that innovations in digitalization, Big Data and AI are offering new possibilities for operating smart energy systems with a higher share in renewables. Moreover, the urgency of tackling climate change is also providing further impetus for the uptake in renewable energy. As a result, countries are increasingly keen to accelerate the deployment of renewables. Director General of IRENA hailed the UAE’s experience has been at the forefront of these developments and has actively been harnessing its vast renewable energy resources.

Speaking in the same panel, Dr. Ahmed Al-Durra, Associate Professor, Department of Electrical and Computer Engineering, Khalifa University of Science and Technology, United Arab Emirates, shed light on the future of electricity in the world’s energy mix. He noted that energy paradigms have experienced a significant change in the past few decades, from fossil-based resources to sustainable energy sources. As the scenario of highly penetrated renewables is further enhanced, the production, distribution and use of energy should be as technologically efficient as possible, while incentives to save energy at the end-user stage should also be strengthened. Al-Durra explained that modern renewable energy systems are variable and mostly unpredictable. Therefore, it is also important to keep in mind that simple direct integration of renewable energy into the grid can lead to a number of serious issues such as poor power quality, low efficiency, high power losses and even system instability.

Panel II, titled “Change and Security,” was chaired by H.E. Maqsoud Kruse, Executive Director of Hedayh, United Arab Emirates. In this panel, Dr. Nathan Toronto, Associate Professor at the National Defense College in the United Arab Emirates, spoke about the relationship between technology and the change of warfare. He pointed out that up until now, two factors have influenced how wars are fought: technology and human organization. These factors have combined to determine the lethality of the battlefield, the key aspects of which have historically been cover and concealment, firepower and communication. After Operation Desert Storm, lethality centered on using advanced surveillance and reconnaissance techniques, as well as precision firepower to find and destroy enemy. Dr. Toronto expects that in the future, human organization will likely have a much greater effect on the nature of warfare than the technology available, and that decision makers would do well to focus on building resilient social institutions and educational systems that aid individuals in learning to be creative, nurturing discerning critical thinkers. In other words, focus needs to shift to buying fewer guns and educating more children.

Also speaking in Panel II was Dr. John Anthony Hardy, Assistant Professor of Homeland Security at Rabdan Academy in the United Arab Emirates. Dr. Hardy presented a paper titled “Technology and Internal Security” in which he said that technology is the key driver of change in domestic security operations. He pointed out that advances in technology create new capabilities and new opportunities for the collection and analysis of a broad range of data, intelligence and evidence. Technology is enabling new and improved methods of detection, surveillance, identification, and analysis that directly affect internal security. This creates many advantages, including new tools, new forms of data and new avenues for accessing and understanding information. It also creates new challenges, such as ensuring that agencies have access to the skills and resources required to utilize technology effectively, that their powers match the pace of operational innovation and that countermeasures are pre-empted where possible. Despite these challenges, Dr. Hardy explained, the UAE is exceptionally well-positioned to take advantage of technological advances to improve internal security due to its experience in acquiring advanced systems, its well-developed capacity to leverage cutting-edge technology, its leading industry skills, and its culture of innovation.

In his presentation, Mr. Hamad Mubarak Al-Ameri, the Director of the Information and Communication Technology Department, at the National Emergency, Crisis and Disaster Management Authority, United Arab Emirates, addressed crisis management in light of technological advancement. He pointed out that with the ongoing developments in all aspects of life, crisis management has become more complicated than ever before. An urgent need, he said, has arisen for a proactive approach to prevent crises or to mitigate their effects. The response begins with phases of prevention and preparedness that estimate possible risks and threats as well as develop proper plans and frameworks to ensure an effective response within a suitable time period.

Mr. Hamad Mubarak Al-Ameri emphasized that information is critically important in handling any crisis and is the cornerstone for achieving effective management. Accurate and up-to-date information contributes enormously by giving decision makers vital knowledge to make the right decision. In this regard, the role of technology and communication takes on greater significance as key to controlling and utilizing a huge volume of information throughout the crisis. They can be used to give leadership the very latest incident updates and developments, and in turn allowing for dissemination of governmental directions to the public. Mr. Hamad Mubarak Al-Ameri added that since the UAE is at the forefront of development in many fields, entities in both government and private sectors have an opportunity to further the nation’s pioneering role as it applies the best technological practices in emergency and crisis management.

The second day of the ECSSR 24th Annual Conference resumes on Wednesday, with a keynote address to be delivered by Engineer Omran Sharaf, Project Director of the Emirates Mars Mission Project (Hope Probe), at Mohammed bin Rashid Space Center. Following this, Panel III will discuss the industrial strategy for sustainable competitiveness, and the role of business education.

Finally, Panel IV will tackle cultural and social changes and their impact on the national identity.