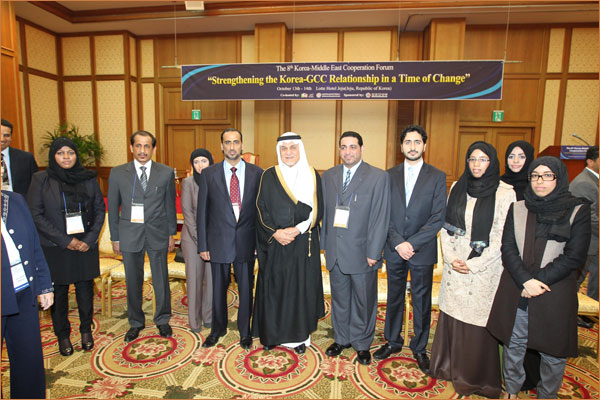 The Emirates Center for Strategic Studies and Research participated in the 8th Korea-Middle East Cooperation Forum hosted by the Jeju Peace Institute (JPI) of the Republic of Korea at the Hotel Lotte, Jeju City, South Korea from October 13-14, 2011, under the heading ‘Strengthening GCC-South Korea Relations in a Time of Change’.

The 8th Korea-Middle East Cooperation Forum constituted an elite group of experts, researchers, politicians and officials in the Middle East and the Republic of South Korea. The Forum focused on many issues such as effects of regional geopolitical challenges on Gulf-South Korea relations, in terms of issues of security and stability in the region, political and military relations between the two sides, and wider regional concerns facing the region. Moreover, it held discussions on the advancement and prosperity of Asia and its impact on economic cooperation between GCC countries and South Korea and deliberated on strengthening cultural and educational exchanges between the two sides.

Enunciating the objectives of the Forum, HE Dr. Jamal Sanad Al-Suwaidi, Director General of the ECSSR, said that the Forum sought to build bridges of cooperation and coordination between countries of the Middle East and the Republic of South Korea, both at present and in the future, in order to achieve sustainable development in all fields between both sides. He added that the Forum  played an important and vital role in the exchange of views and toward enhancing mutual understanding and cooperation in the interest of the two sides. He pointed out that the Forum offered timely opportunity for the exchange of experiences and to learn from them as well as for developing partnerships of strategic import.

HE Dr. Jamal Sanad Al-Suwaidi highlighted the deep bonds of friendship and cooperation that characterize UAE-South Korea relations, and underscored the importance of seeking to strengthen and develop these relations to the optimum level in various fields to serve interests of both the UAE and South Korea.