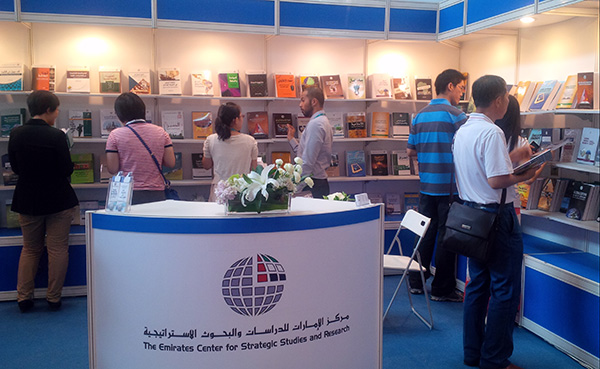 The Emirates Center for Strategic Studies and Research (ECSSR) showcased its publications at the 20th Beijing International Book Fair held at the China International Exhibition Center (New Venue) from August 28 to September 1, 2013. These publications included research studies and analyses exploring various political, strategic, economic and social issues pertinent to the Gulf region, the Middle East and the wider Arab world. They also covered significant regional and global developments in international relations, military and security matters, as well as energy issues.

Among the ECSSR’s recent releases is From Tribe to Facebook: The Transformational Role of Social Networks, which seeks to determine the future political, social, economic, cultural and security implications of social networks, as well as how they affect social and political interaction in the UAE and abroad, what implications they may have for traditional family structures, and whether governments will be capable of limiting their role and influence on society.

The ECSSR’s participation at the Beijing International Book Fair – one of the largest in Asia – reflected the global appeal of its publications among foreign intellectuals, scholars and professional researchers, as well as its desire to establish direct contact with international publishing houses and experts in the industry. The ECSSR’s participation also provided an opportunity to negotiate translation agreements covering books authored by globally-recognized experts in international relations, energy, and security and military studies. The Kingdom of Saudi Arabia was the Guest of Honor at the Beijing International Book Fair 2013.