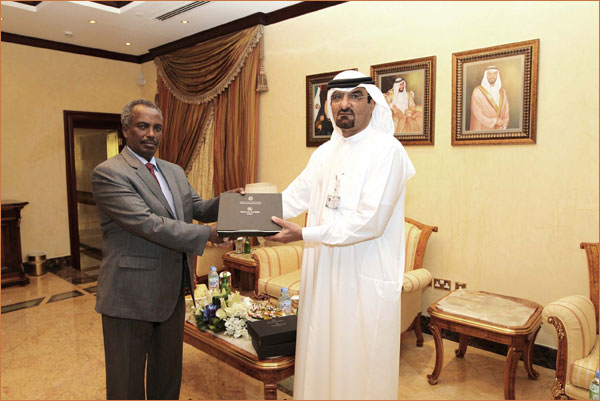 The ECSSR held a graduation ceremony for a group of trainee diplomats from the Republic of Somalia on the completion of their four-month long training course in Diplomatic Studies. The ceremony was held at the headquarters of the ECSSR in Abu Dhabi. In his message, Director General of the ECSSR, His Excellency  Dr. Jamal Sanad Al-Suwaidi stated: “The ECSSR celebrates the graduation of a new generation of diplomats from brotherly state of Somalia, after they successfully distinguished themselves in an intensive training course,” which is the result of fruitful cooperation and coordination between the Centre and the Ministry of Foreign Affairs in the UAE.

In a speech on behalf of His Excellency Mohamed Mahmoud Ibrahim, the Deputy Prime Minister and Minister of Foreign Affairs of Somalia; the Director of the Diplomatic Institute of Somalia His Excellency Yousef Also expressed the appreciation and gratitude of Somalia to the UAE and its leadership and thanked the UAE Ministry of Foreign Affairs and the staff members of the Emirates Centre for Strategic Studies and Research for their contribution in supporting Somalia diplomacy.

At the conclusion of the ceremony, HE Dr. Juma Mubarak Al Junaibi, Undersecretary of the Ministry of Foreign Affairs, Mr. Ahmed Seif Al-Baluchi, Deputy Director-General for Management at the ECSSR, and Mr. Khalifa Mubarak Ketbi, Director of Human Resource Department at the ECSSR, handed out graduation certificates and souvenirs to Somali diplomats.