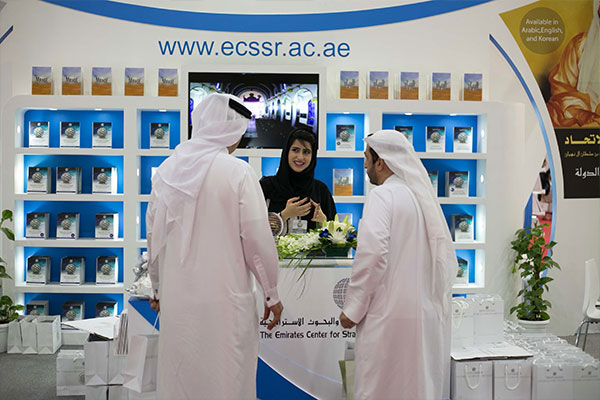 The Emirates Center for Strategic Studies and Research (ECSSR) participated in the 2015 Smart Government Exhibition held from 8-10 June 2015 at the Dubai World Trade Centre alongside more than 25 federal and local entities. His Highness Sheikh Mansour bin Mohammed bin Rashid Al Maktoum, President of the Dubai International Marine Club and Chairman of the Supreme Committee for the Protection of the Rights of Persons with Disabilities, visited the ECSSR stand during the exhibition.

His Highness Sheikh Mansour received a copy of the book – From Tribe to Facebook: The Transformational Role of Social Networks – which has been authored by His Excellency Dr. Jamal Sanad Al-Suwaidi, Director General of the ECSSR. He praised the book and the important ideas it contains. The Center also distributed copies of the book to visitors as it addresses an extremely important issue related to the theme of the Exhibition this year, which is the growing role of social media owing to the qualitative leap in digital technology.

The ECSSR’s participation in the 2015 Smart Government Exhibition was the result of its keenness to contribute towards the events taking place in the UAE and making them successful. This also falls within the framework of the Center’s support for smart transformation efforts in government services, especially the Smart Government Initiative launched by His Highness Sheikh Mohammed bin Rashid Al Maktoum, Vice President and Prime Minister of the UAE and Ruler of Dubai (may God protect him), in 2013. The initiative is aimed at providing round-the-clock services to the public wherever they are by using smart technologies.

The ECSSR takes keen interest in the subject of technological advancement in media and social networks and their various applications. This is part of the Center’s commitment to keep pace with modern technology in the performance of its scholarly and academic mission and in community services. The Center, in its conferences and publications, is always keen to highlight issues related to information technology and communications revolution and the best means to utilize them in the service of the community.