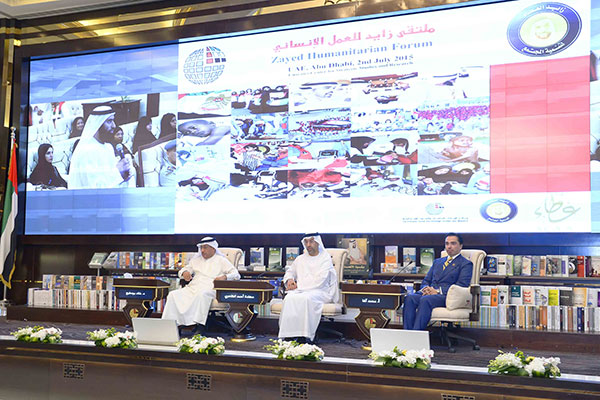 The Emirates Center for Strategic Studies and Research (ECSSR) hosted sixth edition of the Zayed Humanitarian Forum, held under the slogan ‘Social Investment Is Our National Responsibility’. The event was organized at the Sheikh Zayed bin Sultan Al Nahyan Hall in the ECSSR Office Complex in Abu Dhabi on Thursday, July 2nd. Representatives of several government and private organizations working in the field of humanitarian and social services around the world were present on the occasion.

The forum – which was organized by the Zayed Giving Initiative, the Arab Union for Voluntary Work, the Arab Society for Social Responsibility, the Arab Foundation for Humanitarian Action, and the ECSSR – was held in conjunction with the Emirates Humanitarian Conference on the 19th of the holy month of Ramadan. The event was organized to mark the ‘Emirati Humanitarian Work Day’ and the death anniversary of the Founder of the UAE, the Late Sheikh Zayed bin Sultan Al Nahyan (may God bless his soul). The event highlighted the impressive array of charity and humanitarian efforts.

The ECSSR hosted this forum as part of its commitment to participate in efforts to strengthen the culture of humanitarian and voluntary work. The Center always shows keenness to support the various events aimed at commemorating the late Sheikh Zayed bin Sultan Al Nahyan (may God bless his soul). The idea is to remind the world of his great humanitarian initiatives that have become a model for institutions and countries around the world and inspire them to exert greater efforts towards human development and irrespective of race, religion or gender.

As part of its efforts to honor the pioneers of humanitarian and social work, the Forum dedicated its most prestigious award – the Emirates Medal of Humanitarian Action – to two prominent Emiratis who have made immense contributions in this field at the Arab and international levels. The two names are His Highness Sheikh Nahyan bin Zayed Al Nahyan, Chairman of the Board of Trustees of Zayed bin Sultan Al Nahyan Charitable and Humanitarian Foundation, and His Excellency Dr. Jamal Sanad Al-Suwaidi, Director General of the ECSSR.

Dr. Reem Osman, CEO of Saudi German Hospital, was honored as Corporate Social Personality for her contribution towards enabling medical personnel to treat the poor around the world. During the event, Sheikh Abdulaziz Al-Nuaimi and Ms. Maryam Ahli were selected as civil ambassadors for humanitarian work while the Emirates Humanitarian Award was granted to 11 partners in the field of humanitarian efforts. This list included Al Hilal Bank and Dubai International Humanitarian City. On the occasion, the Zayed Humanitarian Forum honored its supporters including the General Women’s Union and the Family Development Foundation.

The Forum began with the UAE’s national anthem following which a documentary on the Emirates Giving Initiative was screened. Speaking on the occasion, Dr. Adel Al-Shamari, CEO of Zayed Giving Initiative, said that the Initiative that was established in 2002 and has helped around three million children around the world. He emphasized that the UAE attaches great importance to humanitarian efforts thanks to the late Sheikh Zayed bin Sultan Al Nahyan (may God bless his soul) who was a symbol of generosity and instilled this culture in the hearts of Emiratis.

The culture lives on due to unlimited support provided by the UAE’s wise leadership, under President His Highness Sheikh Khalifa bin Zayed Al Nahyan (may God protect him) and His Highness Sheikh Mohammed bin Zayed Al Nahyan, Crown Prince of Abu Dhabi and Deputy Supreme Commander of the UAE Armed Forces (may God protect him). He also expressed his deep gratitude to the ECSSR for its strategic partnership, and embracing the forum in its six years. Secretary-General of the Arab Federation of Voluntary Activities, H.E. Yousef Al-Kazim, and International Humanitarian City officials also addressed the gathering.