ECSSR ECSSR NewsSigning Ceremony of Eternal Imprints by H.E Dr. Jamal Sanad Al-Suwaidi at a Ceremony in the Ministry of Foreign Affairs and International Cooperation

Signing Ceremony of Eternal Imprints by H.E Dr. Jamal Sanad Al-Suwaidi at a Ceremony in the Ministry of Foreign Affairs and International Cooperation

Signing Ceremony of Eternal Imprints by H.E Dr. Jamal Sanad Al-Suwaidi at a Ceremony in the Ministry of Foreign Affairs and International Cooperation 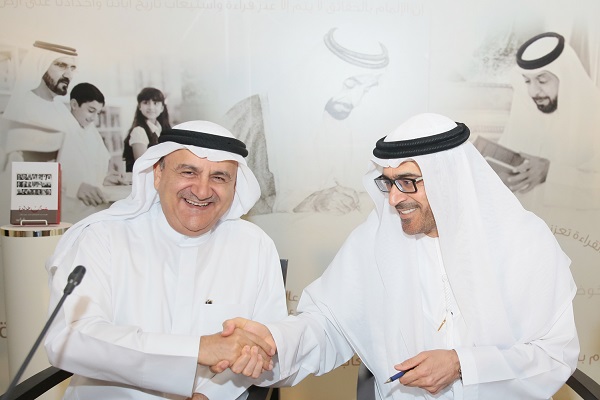 H.E. Dr. Jamal Sanad Al-Suwaidi, Director General of the Emirates Center for Strategic Studies and Research (ECSSR) signed his book Eternal Imprints: Figures that Made History and Others that Changed the Future of their Countries, at a ceremony held by the Ministry of Foreign Affairs and International Cooperation on Monday May 9, 2016 at the Ministry’s headquarters in Abu Dhabi. The ceremony is part of the initiative dubbed ‘the Foreign Ministry Reads’ which comes in line with the declaration of 2016 a Year for Reading, in implementation of the directives of His Highness Sheikh Khalifa bin Zayed Al Nahyan, President of the UAE- may God protect him.

This signing ceremony evidences the interest of H.E. Dr. Jamal Sanad Al-Suwaidi  in contributing to the success of national initiatives aiming at spreading knowledge and promoting reading to become a way of life for all members of the Emirati society as well as to exchange views and ideas with researchers, experts, academics and the wider audience.
Eternal Imprints: Figures that Made History and Others that Changed the Future of their Countries, available in Arabic and English, is a book of tremendous cultural value as it sheds light on the lives and legacies of 22 international personalities and leaders who left lasting imprints in their countries and beyond in various fields ranging from politics, economy and development to thought and sciences. Through lofty stands, achievements, creativity, ingenuity and the strong willingness and positive values of these leaders, these renowned figures offer inspiring examples and lessons that help to lay strong foundations to overcome current challenges and crises.

The ceremony was attended by eminent diplomats, experts and academics. On this occasion, the attendance highlighted the importance of the works of H.E. Dr. Jamal Sanad Al-Suwaidi in general and Eternal Imprints: Figures that Made History and Others that Changed the Future of their Countries in particular in view of its cultural value. They praised the book for paying tribute to a group of prominent personalities that left an enduring legacy in the history of their nations and the world. The book also draws lessons and values from the contributions of these leaders and presents them to the reader for inspiration, which represents a successful attempt by H.E. Dr. Jamal Sanad Al-Suwaidi to showcase the remarkable changes brought by these leaders and the positive values they embody which are needed in our modern age.

Speaking on this occasion, H.E. Dr. Jamal Sanad Al-Suwaidi extended thanks to the Ministry of Foreign Affairs and Cooperation for organizing the signing ceremony and for its interest in promoting intellectual and cultural activities. H.E. Dr Al Suwaidi also pointed out that the dedication of this ceremony to his book is part of the efforts led by the Ministry to raise cultural awareness in society through helping the youngsters learn about the biographies of the personalities that stand as an example for their people and the world thanks to their valuable contributions to the progress of their societies and countries.

H.E. Dr. Jamal Sanad Al-Suwaidi discussed the openness marking the world today where the exchange of information and knowledge between societies is common place. He said that the Emirati society is deeply engaged in the process of world progress, given that the UAE is one of the most open countries and the most committed to progress and integration in the positive and effective world system. Al-Suwaidi added that the current context stresses the importance of reading as a means for different peoples to learn about each other’s experiences and lessons. Reading is key to promoting tolerance, coexistence and open-mindedness in favor of national progress at a time marked by surging calls for terrorism, extremism and destructive ideas.

H.E. Dr. Jamal Sanad Al-Suwaidi highlighted the initiative launched by His Highness Sheikh Khalifa bin Zayed Al Nahyam, President of the UAE- may God protect him, who declared 2016 as a year for reading at the local level and the ‘Reading Challenge’ initiative spurred by His Highness Sheikh Mohammed bin Rashid Al Maktoum, Vice President and Prime Minister of the UAE and Ruler of Dubai, at the Arab level. He said that these initiatives aim at raising the awareness of the Emirati and Arab citizens about the importance of reading so as to help them understand the current developments and draw lessons from history through learning from the trajectories of influential personalities that left lasting imprints on the development process of their countries.

H.E. Dr. Al Suwaidi went on to say that the UAE has always pioneered in adopting initiatives that promote human capacities, including cultural and cognitive skills. In this respect, the declaration of 2016 a year of reading is reflective of the comprehensive governmental strategy to overhaul all sectors. Promoting reading is also meant to be a means for inner changer and improving individual skills.

The Director General of the ECSSR concluded by recalling the lessons learnt from late Sheikh Zayed bin Sultan Al Nahyan- may god bless his soul- who inculcated in UAE citizens the love of reading, learning and perseverance in seeking science and knowledge, because the late Sheikh believed that nation building requires creative and innovative minds in all fields. Al Suwaidi added that the UAE forges ahead on the path of spreading culture and promoting reading to become a way of life. In this regards, national institutions show great engagement to contribute to the success of this initiative as evidenced by the actions taken by the Ministry of Foreign Affairs and International Cooperation through the ‘Foreign Ministry Reads’ initiative.

Earlier this month, H.E. Dr. Jamal Sanad Al-Suwaidi received the 2016/2015 Sheikh Zayed Book Award in the category of ‘Development of Nations’ for his book The Mirage, which studies political religious groups from intellectual, political, cultural, social and faith perspectives. The book discusses the historical context marking the emergence of such political groups in the second decade of the 21st Century and deconstructs the factors that hindered development, enlightenment, modernity and progress leading to widening the gap between the Arab world and the West.