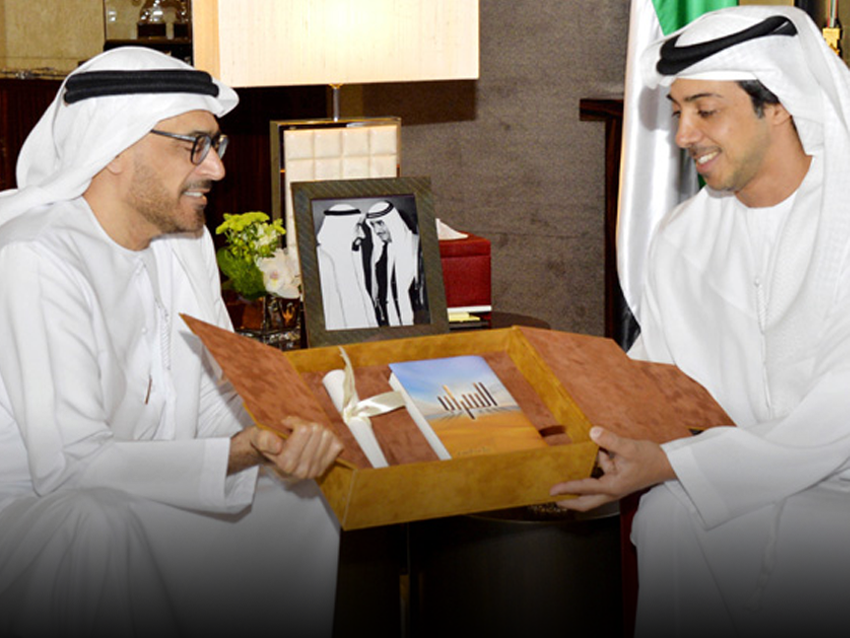 H.H. Sheikha Fatima bint Mubarak, Chairwoman of the General Women’s Union (GWU), President of the Supreme Council for Motherhood and Childhood, and Supreme Chairwoman of the Family Development Foundation (FDF), the “Mother of the UAE,” yesterday received, at Qasr Al Bahr, a delegation of female employees from the Emirates Center for Strategic Studies and Research, ECSSR.

The delegation gave Sheikha Fatima a model of the Sheikh Zayed Grand Mosque, which symbolises social, humanitarian and architectural values, as an international beacon of tolerance, coexistence and openness that reflects the achievements of the late Sheikh Zayed bin Sultan Al Nahyan, whose 110th birthday anniversary is being celebrating this year by the country, to revive his heritage and his humanitarian values and principles.

The delegation presented, to Sheikha Fatima, a summary of the ECSSR’s role in supporting decision-makers, serving the community and achieving the UAE’s sustainable development while explaining a series of lectures about the UAE on various political, economic, security, military, cultural and social topics, most notably, “With United Strength – His Highness Sheikh Zayed bin Sultan Al Nahyan: The Leader and the Nation,” which was published in Arabic, English, French, Italian, Korean and Montenegrin.

The ECSSR has a vital role in educating and raising the awareness of community members through its annual activities, such as lectures, seminars and conferences that aim to discuss various issues related to the UAE’s overall sustainable development.

It will also organise a series of lectures during the Year of Zayed to immortalise the heritage of Sheikh Zayed and highlight his leading role in various issues.

Dr. Jamal Sanad Al Suwaidi, Director-General of the ECSSR, said that Sheikha Fatima is an inspiration to female leaders from the region and around the world, due to her ongoing national and international efforts to promote women’s empowerment and defend their causes while her initiatives have enabled women to take on their development role and have made them active members of their communities.

>He stressed that Sheikha Fatima’s diverse initiatives in the area of women’s empowerment and her support for their causes have increased the awareness of women about education and promoted their overall role in their communities, on national, regional and international levels.

“Sheikha Fatima has a special place in the hearts of all Emirati and Arab children, as she is a symbol of endless giving, and her true patriotism has established the values of loyalty and belonging in the souls of the nation’s children. She is a unique model of leadership, who has had a considerable impact on issues related to women, motherhood, childhood and the family, on Arab and international levels,” Al Suwaidi added.

The meeting was also attended by several Sheikhas and female leaders.