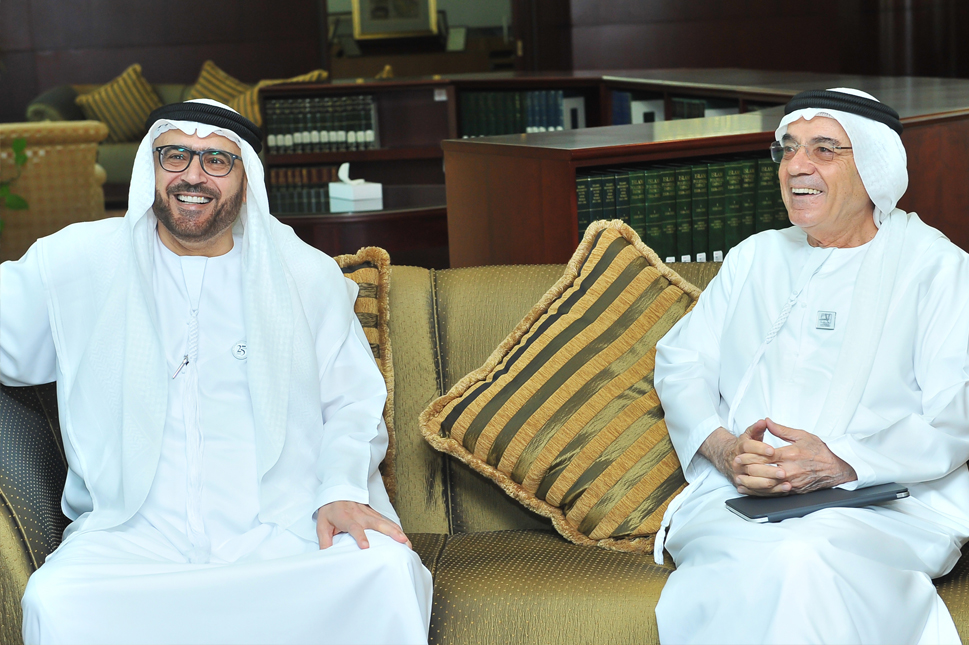 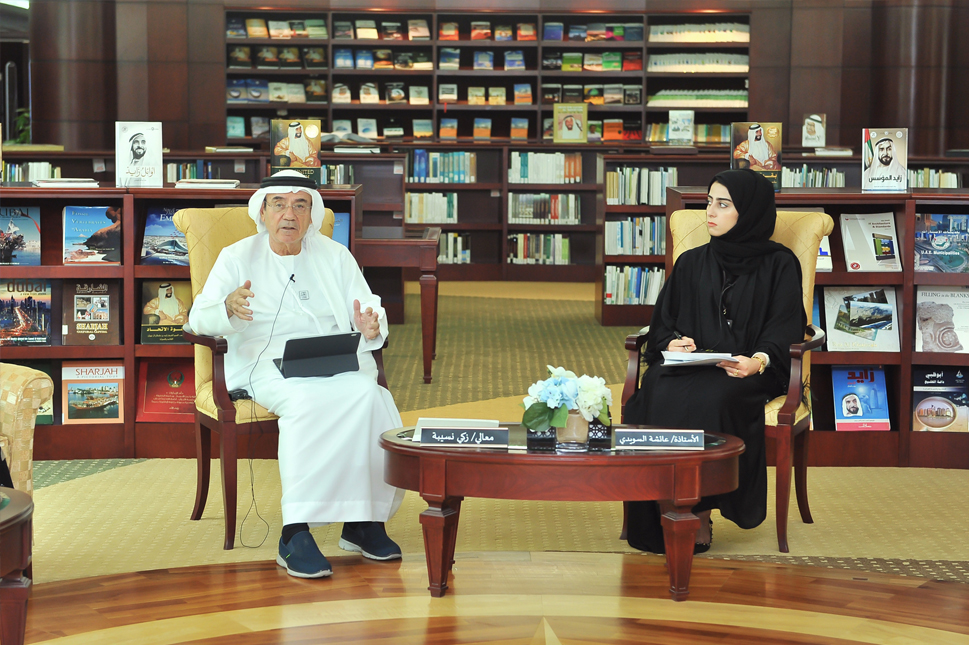 As part of its celebration of the anniversary of the Accession Day of the Late Sheikh Zayed bin Sultan Al Nahyan (May his soul rest in peace), who assumed leadership in Abu Dhabi on August 6, 1966, the UAE Federation Library at the Emirates Center for Strategic Studies and Research (ECSSR) hosted His Excellency Zaki Nusseibeh, UAE Minister of State, to talk about his many years of experience with Sheikh Zayed.

In the dialogue session entitled “Up Close with Sheikh Zayed,” as part of the ECSSR Lectures Series (No. 684), Nusseibeh said that the image of Sheikh Zayed is still imprinted in the minds and hearts of all who knew him and witnessed his achievements. He added that Sheikh Zayed’s life has become an integral part of the region’s history, as a man who was able to establish a state in the most difficult circumstances and who built his own model of governance and administration. Nusseibeh said that many historians continue to commend him as a great human being, especially after his success in establishing the UAE Federation, despite the internal obstacles and the difficult regional and international challenges.

Nusseibeh talked about the four main characteristics of Sheikh Zayed’s personality that were reflected in his leadership style and his dealings with citizens, VIPs, and guests at international events. First, was his deep devotion to religion, which governed all his actions and behavior. Second, was his humanitarianism, which was evident in his kindness to the vulnerable and the needy. Third, was his sense of nationalism. And fourth, was his strong commitment to Arab unity and security, which prompted him to adopt many important policies that strengthened national and regional security.

Nusseibeh pointed out that Sheikh Zayed had several pillars on which he based his foreign policy, the most important of which was to strengthen relations with neighboring countries by resolving disputes through peaceful means and defusing Arab-Arab conflicts. He added that Sheikh Zayed recognized the importance of the Indian subcontinent and made alliances with a large number of other countries around the world. Nusseibeh explained that Sheikh Zayed was known for telling the truth, being decisive in crucial issues, being tolerant in conflict resolution, and communicating with others openly and constructively.

It is worth mentioning that His Excellency Zaki Anwar Nusseibeh is currently the Minister of State in the UAE Government. He is responsible for public and cultural diplomacy at the Ministry of Foreign Affairs and International Cooperation, in addition to his role as the Cultural Advisor in the Ministry of Presidential Affairs.

Nusseibeh started his professional journey in the UAE in 1967. He has been involved in journalism, translation, publication, authentication, strategic planning, and education. His vast experience has enabled him to keep abreast with the most prominent events related to Sheikh Zayed's assumption of power, the establishment of the United Arab Emirates, and the journey of its development.

Nusseibeh held senior positions in the Abu Dhabi Authority for Culture and Heritage. He was a member of the Board of Directors of the Abu Dhabi Tourism and Culture Authority (ADTA), and on a number of international councils.

Nusseibeh received numerous merit awards and medals of honor worldwide. He obtained his MA in economics from the University of Cambridge in England and was awarded an honorary doctorate degree in humanities from Al-Quds University in 2014.