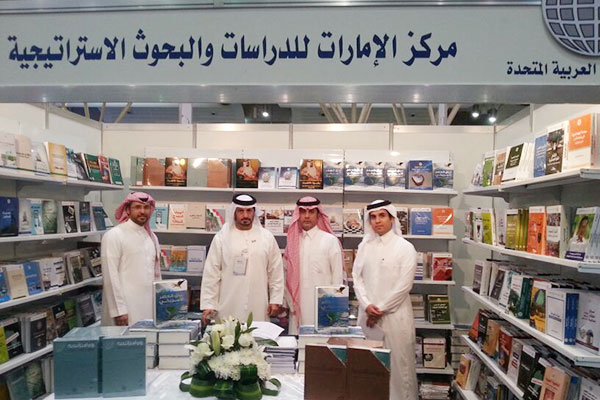 The Emirates Center for Strategic Studies and Research (ECSSR) took part in the Riyadh International Book Fair, which was held from 4-14 March 2015, under the slogan ‘Books Mean Coexistence’. The Book Fair was organized by the Ministry of Culture and Information in the Kingdom of Saudi Arabia, under the auspices of His Majesty, Custodian of the two Holy Mosques King Salman bin Abdul Aziz Al-Saud. A total of 915 publishers from 29 Arab and non-Arab countries participated in the fair.

The ECSSR participation in the book fair this year coincides with 21st anniversary of the establishment of the Center and its number of publications crossing 1,100. These publications include refereed scientific studies on strategic, military, political, economic, social, cultural, and information issues in Arabic and English. These books are of interest to the UAE and GCC countries in particular and are also relevant to the Arab world and the most important regional and global developments.

The ECSSR participates in book fairs and other activities across the Arab and global capitals to display its latest publications and ensure access to a wide range of intellectuals, researchers, academics, policymakers and those interested in its various activities. This is part of its efforts to spread its message which doesn’t end at the UAE’s borders but extends to include the GCC, Arab and international arenas.

Among the most recent publications displayed at the Riyadh International Book Fair was The Mirage by His Excellency Dr. Jamal Sanad Al-Suwaidi, Director General of the ECSSR. Published in the beginning of 2015, the book has been acclaimed by researchers and academics and has received praise in cultural and intellectual circles, at the Arab and international levels. The theme of the book is the political mirage, or an illusion, being created by religious political groups in the region by mixing politics with religion to achieve their objective of wielding power. Besides adopting a scientific approach toward the subject, the book also analyses the UAE citizens and residents’ views about these groups. It also contains information regarding political Islam, its groups and organizations.

Other books being displayed include Unconventional Fossil Fuels: The Next Hydrocarbon Revolution? by a group of experts and academics in the field of oil and energy, Islamic Political Movements and Authority in the Arab World: The Rise and Fall, published in 2014 and co-edited by H.E. Dr. Jamal Sanad Al-Suwaidi and Dr. Ahmed El-Safty. Islamic Political Movements analyses and evaluates the experiences of Islamic movements and parties in power, particularly after what is called the ‘Arab Spring’. The encyclopedic book Prospects for the American Age: Sovereignty and Influence in the New World Order, published in 2014 by H.E. Dr. Jamal Sanad Al-Suwaidi offers an analytical and objective vision of the current world order, the structure of power. It focuses on the idea that the US will remain the dominant global power in the new world order for the next 50 years, according to statistics and information that proves and substantiates the qualitative American supremacy.

Among the books the Center displayed at the exhibition was the translated work Start with why: How Great Leaders Inspire Everyone to Take Action?, which has received wide acclaim after it was released in English. The book offers a clear vision of the requirements of leadership and inspiration as well as The Future of Warfare in the 21st Century, which deals with the changing nature of wars, new threats to security and political and civil aspects affecting future wars.

The ECSSR has taken part, through its agent in the Kingdom of Saudi Arabia, in the following sessions: