Why Is the Sudan Peace Agreement Taking So Long?

Why Is the Sudan Peace Agreement Taking So Long? 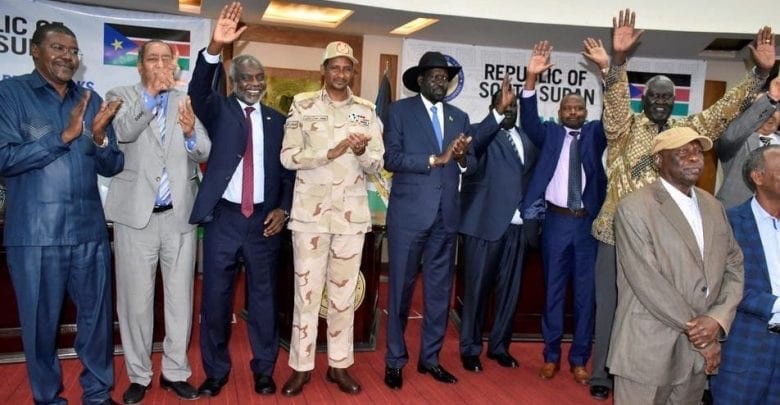 The Sudan Peace Agreement remains stalled, awaiting final consensus between Sudan’s Sovereign Council and Cabinet, and armed rebel movements, which are politically and militarily active in several areas of the country. The ultimate goal is to end ongoing disputes over issues such as compensation for victims of the war.

Statements made by all sides reflect optimism that the Agreement is in its final stages. However, the process has been subject to sabotage from parties seeking to prolong the conflict. The continuation of hostilities would hinder the stability needed to allow Sudan to embark on a rebuilding and development process, harnessing its resources to improve the quality of life for its people. The underlying reason for the stalled progress in reaching a resolution is that the conflict is tied to the agendas of local groups, whose narrow interests would be adversely affected should the fighting end.

In mid-June, Deputy Chairman of the Sudanese Sovereign Council, Mohamed Hamdan Dagalo, also known as Hemedti, was optimistic that a peace agreement would soon be reached. Following the meeting he chaired in June, he stressed that the Sovereign Council and Cabinet were committed to achieving peace and promised the Sudanese people that a comprehensive and sustainable peace agreement would soon be signed. However, since then, his statements on the prospects for the Agreement have been less optimistic.

Efforts to undermine the Agreement are reflected in incidents that have taken place in various parts of Sudan. They confirm Hemedti’s recent concerns and reveal a premeditated intention to provoke violence, conflict and war. Moreover, these incidents aim to disrupt government efforts to reach a settlement, as well as to increase pressure on the country’s security and military organizations.

During Eid al-Adha celebrations, several villages in the Darfur region, Western Sudan, Kasala State and Eastern Sudan were subject to a series of attacks that left many dead and injured. This has increased the number of displaced people who have fled to escape the violence. Militants attacked a village in South Darfur State, in response to the arrest of a tribal chief after villagers reported him to the police. In the attack, homes were shot at, looted and burned. Elsewhere in the country, two people were killed, and thirty injured, in an attack on a village in Kasala State, while 500 gunmen massacred approximately sixty-one people in a village in West Darfur State at the end of July; most of the victims belonged to a tribe of African descent. This comes as 2,000 families, with more than 10,000 members, have fled toward neighboring regions, or have crossed the border into Chad. Despite bearing the appearance of tribal disputes, there are indicators that hidden agitators behind these attacks seek to ignite further violence.

According to Dagalo, certain groups aim to incite violence and settle scores in a bid to destroy the country. The causes of escalations in tribal conflicts in the regions of Darfur, South Kordofan and the East have been fabricated. This has been proven by investigations into the suspected perpetrators of the deadly incidents. In light of these developments, all concerned parties in Sudan must show more solidarity and partnership, to thwart these subversive plans, exercise greater levels of self-control and avoid overreactions. Moreover, the Sudanese government, and the security and military, must exercise caution and be prepared to take additional measures to address any fresh attempts to disrupt security and stability, or sew discord amongst the Sudanese people. The government and all parties participating in the Agreement must speed up the negotiation process. Each party will be required to offer some concessions in order to successfully reach a resolution. In this way, they can put an end to the schemes of conspirators who seek to establish a reign of chaos in Sudan.