Tunisia: The Conflict between Political Forces Threatens the Democratic Transition

Tunisia: The Conflict between Political Forces Threatens the Democratic Transition 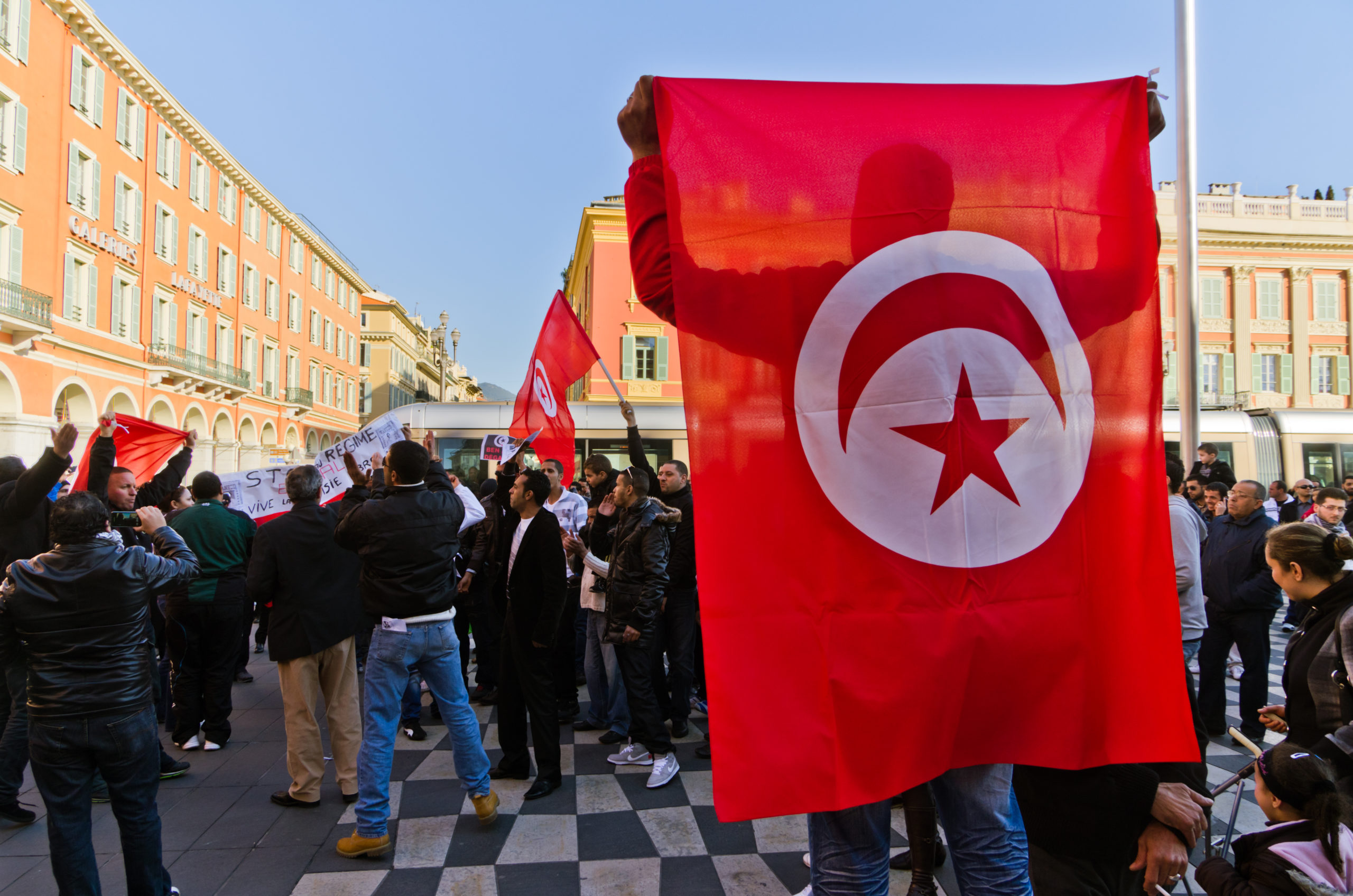 Tunisia is witnessing great change across its political landscape with the emergence of new political movements and alliances, the disappearance of existing ones and the collapse of key alliances. These developments raise many questions, especially regarding their potential impact on the democratic transition taking place in the country.

Significant transformation is currently occurring in Tunisian politics, with significant repercussions for the democratic transition process in the country. Intense disputes between political forces are compounding the economic challenges facing the country, undermining the ability of the government to fulfill its obligations toward citizens. This has led to public demonstrations and occasional instances of insecurity. The reality on the ground in Tunisia does not provide the appropriate environment to support the democratic transition process.

These disputes have surfaced against the backdrop of the parliamentary and presidential elections that took place in Tunisia last year. These elections led to a reduced influence for the Popular Front, a leftist coalition made up of more than a dozen parties and movements, and the Nidaa Tounes (Tunisia’s Call) party, which won the parliamentary elections in 2014. As a result, new movements, parties and political forces have gained power, including the Qalb Tounes (Heart of Tunisia) party, led by Nabil Karoui, who ran in the presidential elections against President Kais Saied, and the Dignity Coalition, which is closely aligned in its political discourse and ideologies with the Ennahdha Movement (Renaissance Party) and the Free Destourian Party (Free Constitutional Party). These parties, along with the People’s Movement, the Democratic Current and Tahya Tounes (Long Live Tunisia), which was established by the former Prime Minister and former leader of Nidaa Tounes, Youssef Chahed, represent the current political map. As a result, Tunisian politics is characterized by incoherence and division. There is no united vision, leading to instability as no government has been able to last more than four months.

This is exemplified by the rise of the Nidaa Tounes party. Founded by the late President Beji Caid Essebsi in 2012, it positioned itself as a fierce opponent of the political Islam movement represented by the Ennahdha Movement, and won control of parliament just two years later in the 2014 parliamentary elections. This victory, with a plurality of 86 seats, led Essebsi to compete in the presidential elections, where he won 55.68 percent of the vote in the second round, against 44.32% percent for his competitor Moncef Marzouki. However, the party was soon beset by division and internal conflict, severely weakening its ability to govern. After the death of Essebsi, it began to collapse, losing both popularity and public confidence. It’s rapid decline was revealed in the recent parliamentary elections, during which the party won only four seats. Nevertheless, party leaders seem intent on returning to power and have announced they are preparing to hold an extraordinary party congress next July, coinciding with the first anniversary of Essebsi’s death. The head of the Central Committee and General Coordinator of the conference, Kassem Makhlouf, said that the party is organizing its extraordinary congress from July 26-27, just one day after the anniversary of Essebsi’s death and that the congress aims to correct the party’s path and re-elect a new leadership. This will be preceded by congresses to elect representatives to the extraordinary congress. Undoubtedly, Nidaa Tounes’ retreat has left a huge void in the political arena, and the Free Destourian Party, led by Abir Moussi, is presenting itself as a fierce opponent of the Ennahdha Movement in an attempt to fill the vacuum.

Among the exciting developments taking place in Tunisia during this period of transformation is the reemergence of the Ennahdha Movement, led by Prime Minister Elyes Fakhfakh, who formed a coalition during the most recent elections to ensure a governing majority. The ruling coalition consists of the Ennahdha Movement (represented by 54 members of Parliament), the Democratic Current (22 members), the Islah bloc (16 members), the Tahya Tounes (14 members) and the People’s Movement (5 members). However, Fakhfakh refuses to expand the ruling coalition, as demanded by his own party, the Ennahdha Movement. These calls for expansion are led by former Prime Minister Ali Laarayedh. He has stated that the Ennahdha Movement seeks to persuade Fakhfakh to include the Qalb Tounes party in the ruling coalition, so that everyone, but most importantly economic and business stakeholders, feel that it is a stable government. Qalb Tounes is considered the second party in the country.

It appears that Ennahdha‘s insistence on expanding the ruling coalition has come amid reports of a rift in the government, which was evident in the recent parliamentary session on the Libyan issue, in which the Tahya Tounes party and the People’s Movement, both participating in the government, voted against Fakhfakh’s party, and sided with the Free Destourian Party (Opposition) to reject foreign interference in Libya. Consequently, the Ennahdha Movement refused to sign a document of government solidarity. Rached Ghannouchi, Speaker of Parliament and co-founder of the Ennahdha Movement, said the party refused to sign the document due to a lack of solidarity among the parties of the government coalition, undermining the authority of Prime Minister Elyes Fakhfakh.

The renewal of the Ennahdha Movement’s call to expand the ruling coalition also coincided with positive statements to this effect by the head of the Qalb Tounes party, Nabil Karoui. He said that the electoral law in Tunisia produces a result that forces the first party to govern alongside the second party, and that therefore political stability is achieved only when there is compatibility between the first and second parties in Parliament. Karoui stressed that when the first party agrees with the second (such as during the October 2014 parliamentary elections in which the Ennahdha Movement and Qalb Tounes aligned) a parliamentary majority and stability is achieved. During those elections, Rached Ghannouchi’s Ennahdha Movement succeeded in securing the office of Prime Minister, while Qalb Tounes won the position of Speaker of Parliament. These statements may indicate a desire by Qalb Tounes to join the ruling coalition, despite its differences with the Ennahdha Movement, which had stressed before the elections that it would not ally with Qalb Tounes, as their leaders are associated with the late President Zine El Abidine Ben Ali, who was overthrown in the Jasmine Revolution.

The most recent change among Tunisian political parties can be seen in the emergence of the Tahya Tounes party, which was founded by former Prime Minister Youssef Chahed in 2019 with the aim of contesting the presidential and parliamentary elections. Three members of parliament representing the party (Mabrouk Korchid, Ayachi Zammel and Kamel Ouadi, all of whom are first-rank leaders) submitted their resignations from the parliamentary bloc. However, the party’s problem appears to be greater than these three resignations, as the political office of the El Moubadra (Initiative) party is considering backing away from the fusion that took place with Tahya Tounes before last year’s elections, in light of the growing differences between the two parties. Observers think the Tahya Tounes party may move to join the Free Destourian Party bloc in the near future, or form a political center party, open to a number of parties aligned with its ideology, such as Machrouu Tounes, and the Tunisian Alternative party.

Thus, the Tunisian political landscape, which is currently witnessing widespread transformation, may witness yet deeper change in the coming months if a more powerful opposition bloc emerges from the potential alliance between Tahya Tounes and the Free Destourian Party. This alliance may then attract the Nidaa Tounes party, which might return stronger to the political scene if it is able to reorganize its ranks. It may also attract some parties of the ruling coalition, which is mired by conflict. This would explain the frantic efforts by the Ennahdha Movement to include the Qalb Tounes party in the ruling coalition. However, this endeavor has been met by opposition from Prime Minister Elyes Fakhfakh and President Kais Saied. In any case, the Qalb Tounes party, led by Nabil Karoui, may be an equalizing force or the main driver of events in the coming period. By joining the opposition, he could lead to the collapse of the ruling coalition and the dissolution of the Ennahdha Movement’s government. However, if Qalb Tounes joins the ruling coalition, it will lead to the formation of a parliamentary bloc strongly supportive of the government of Fakhfakh.

The immense transformation of Tunisian politics may indicate a healthy and natural political climate in light of the current stage in the country’s transition to democracy, but it is important to have a government that enjoys a balanced parliamentary majority. A government without a firm majority cannot carry out the tasks entrusted to it. It is also important to have a strong opposition that corrects the course of government, but the extreme dissonance in positions and ideas, between the main forces in the political arena, has negative repercussions on the overall political process, and at the heart of it, the democratic transition process.