ECSSR Reports & AnalysisSudan: Floods Raise Questions Over the Resilience of Its Infrastructure

Sudan: Floods Raise Questions Over the Resilience of Its Infrastructure

Sudan: Floods Raise Questions Over the Resilience of Its Infrastructure 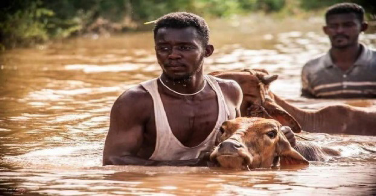 Floods that have swept Sudan, resulting in significant loss of life and extensive physical damage, have prompted the country’s Security and Defense Council to declare a nationwide three-month state of emergency. A higher committee has also been formed to address the impact of the flooding, which has devastated many states, raising questions as to the quality of the country’s infrastructure.

Annually, during the summer’s rainy season, Sudan sees heavy rainfall and flooding. However, this year’s floods have been unprecedented, causing enormous damage. According to experts and officials, the water levels of the Blue Nile, which meets the White Nile at Khartoum, are the highest since recording began in 1902, more than a century ago.

The waters have reached areas previously not affected by flooding; sixteen of the country’s eighteen states have been impacted. More areas along the banks of the Nile remain under threat as the water levels continue to rise. Experts have pointed to two potential explanations for the cause of the flooding; the aging structures of the Roseires Dam, near the Sudanese-Ethiopian border, and the Sennar Dam, in Central Sudan. Additionally, ill-conceived urban expansion along the banks of the Nile, especially in Khartoum, has narrowed the river’s course.

Some question whether there is a connection between the flooding and the construction of the Renaissance Dam, which has been a source of dispute between Sudan, Egypt and Ethiopia. Others suggest that Egypt could have saved Sudan, if it had opened the gates of the Aswan High Dam. However, Sudanese experts and officials have denied any link between the Renaissance Dam and the floods, or that opening the Aswan High Dam’s gates could have mitigated the flood damage. Another argument is that Sudan does not have enough dams to protect the country against floods, especially as several rivers in Sudan, such as the Blue Nile and White Nile, among others, are tributaries of the Nile River. Many Sudanese question the resilience of the country’s infrastructure, in what they claim as the failure of the “current government and previously, Al Bashir’s regime” to prioritize the development of infrastructure, to which flooding is a constant threat.

The unprecedented flooding has caused significant loss of life and physical damage. It has left over one hundred dead, injuring many more and impacting over half a million people. Thousands of homes have been partly or completely destroyed. Sudan’s Minister of Interior recently issued a statement confirming that the number of victims of the floods had reached 103, with fifty injured. This is in addition to the complete destruction of more than 27,000 homes, with 42,000 homes partially damaged. The statement also indicated that the states of Gedaref, North Kordofan, River Nile, South Kordofan, White Nile and North Darfur are the worst affected areas.

The torrential floods, and ensuing heavy losses, have created an urgent need for humanitarian relief in several parts of the capital Khartoum, its surrounding towns and villages, and in the states of Sennar, Al Gezira and Northern State. As the devastation mounted, floods swept away entire villages in the north and south of Khartoum. Along the banks of the Blue Nile, 80 percent of the fruit and vegetable farms have been destroyed. Many important cash crops, the backbone of the local population’s livelihood, have also been affected.

Several Arab countries, including the UAE, rushed to send emergency humanitarian aid to Sudan. The UAE’s Red Crescent put an urgent relief plan in motion, to meet the needs of those worst affected, helping to ensure they have access to food, healthcare and shelter. Moreover, Egypt – Sudan’s northern neighbor – has established an air bridge to Sudan, as military cargo planes transported large quantities of food, medicine and medical equipment.

If the floods have indeed exposed the vulnerability of Sudan’s infrastructure, its interim government must take urgent measures to address the problem, so that Sudan can withstand any future natural disasters.