Perspectives on the Political Crises in Iraq

Perspectives on the Political Crises in Iraq 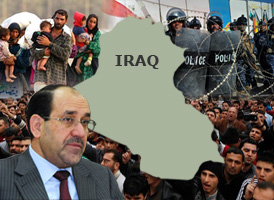 The alarming rise in the number of challenges and crises facing Iraq today is a result of the stalled national reconciliation efforts and the deteriorating security situation. Most Iraqi cities have been witnessing bombings and assassinations on almost daily basis. In the absence of adequate public services the economic and social conditions are also rapidly deteriorating. The current disarray in Iraq is due to a variety of factors.

The first factor is the rise in political sectarianism in the country, which began since the time of US occupation. This has reshaped relations between various denominations in the country and has tipped the balance in favor of the Shiites and Kurds. Sunnis are feeling increasingly isolated as they have been sidelined because of their perceived allegiance to the erstwhile Saddam regime, although Sunnis were as much a victim of Saddam’s policies as any other community.

Notwithstanding the role of the occupation in inciting sectarianism in the country, successive Iraqi governments can also not be absolved of their responsibility in fomenting fissiparous tendencies. In fact, Iraqi politicians were expected to put the country back on the right political course, but many leaders seem inclined to promote their own personal interests and sectarian affiliations, which has exacerbated the polarization of society and weakened the nation. Thus, it was only natural that early this year (in January and February of 2013) several protests were held in cities such as Anbar, Saladin, Mosul, Diyali, Kirkuk etc against the policies of the Al-Maliki government. In fact, these protests have now gathered pace and are spreading to more regions, thus threatening to undermine the consensual political settlement reached in 2007.

One of the main causes behind public protests has been the widespread rejection of the policy of allocating sectarian quotas in administrative affairs. A prominent Saudi scholar Sheikh Abdul Malik Al-Saadi has said that “Al-Maliki's government established the basis for sectarianism by allowing Shiites to take control of Sunni endowments and merging them into Shiite endowments, and by changing the educational curricula in line with the doctrines of one sect, without taking the sensitivities of other sects into account.”

The second factor relates to the growing aspirations of autonomy harbored by several provinces and regions in the country. The justification behind becoming autonomous is to promote localized development and governance, which will also reduce the control of federal administration. However, many states have sought to use autonomy to seize control of the wealth of the state and not share it with the federation. This has turned Iraq into several diversified and somewhat disconnected regions, raising ominous questions about regionalism and its impact on the unity and integrity of the country.

In their call for making their regions autonomous, most provinces are following the example set by the Kurdistan Region, and seem to have disregarded the unique conditions that made Kurdistan an autonomous region, for it was intended to resolve some of the security and cultural sensitivities between the Kurds and Arabs. The most disturbing aspect related to this growing trend of regionalism is that it seeks to promote the interest of its preeminent ethnic group above those of other minority groups in that region, sometimes by imposing even demographic changes at the expense of minority communities. For example, Iraqi Turkmen Front recently issued a statement in which it complained about being a victim of a nefarious agenda that seeks to displace their population from their indigenous regions.

The Front even demanded international protection after the suicide attacks of January 24, 2013, which claimed 150 casualties. Among other attacks intended to ‘ethnically cleanse’ a particular region has been the Safawi attacks in Samarra, aimed at changing the demography of the region. Member of Parliament from Saladin Province, Shalaan Al-Karim, recently announced that in response to the attack in Samarra hundreds of tribal leaders from Anbar, Mosul, Daiali, Kirkuk and Saladin held a meeting on 4 February 2013.

The third factor is the expansion in applicability of Accountability and Justice Law. Previously known as the De-Baathification Law, the scope and implementation of the law has been expanded that has led to political isolation, seizure of properties, and the laying off of a large number of Sunni servicemen. This created a feeling of marginalization and exclusion among the Sunnis (some estimates put the number of people belonging to the Baath Party at 8 million). Hussein Al-Shahristani, who was named the head of the committee responsible for receiving and addressing the demands of the demonstrators, announced the formation of a committee to examine the cases of 6,000 Baathists whose hands were not stained with blood. Thereafter, orders were issued for the release their properties.

Some opponents of Al-Maliki reiterate that his government has misused this law to get rid of its opponents. This accusation was made by Governor of Mosul Atheel Al-Najafi on 22 January 2013 when he said: “The State of Law Coalition refuses to develop a formula for cancellation or amendment to the Law of Accountability and Justice. Although he (Al-Maliki) agreed to make some exceptions, the Coalition is using them in its favor.” Similar charges are evident in the statements of Iyad Allawi: “De-Baathification has already targeted more than a thousand candidates and members in the councils of provinces, which puts a question mark on the next elections to the councils.”

The last factor is the external intervention in Iraq’s internal affairs. This reflects Iraq’s vulnerability to external intervention, which have fomented domestic conflict either through financing of the strife or through political support. This was also evident when for several months after the elections of March 2010 it had become impossible to form a government. The crisis was resolved only after a tripartite consensus between US, Iran and Syria accepted Al-Maliki as the Prime Minister even though his coalition (State of the Law) had not won the majority.

Such interventions are making Iraq internally vulnerable and are hindering the nation’s progress. It could be said that Al-Maliki’s bloc includes factions that are neutral on the conflict in neighboring Syria, whereas some support Al-Assad regime, in accordance with Iran’s approach. The position of Al-Maliki on the crisis [He had initially described Turkish intervention in Syria as ‘rude’] can be partially attributed to the fear that if the majority Sunni opposition succeeds in toppling Al-Assad, it could subsequently fuel problems in Iraq as well.

In light of the above, we can imagine two possible scenarios on the outcome of the current political crisis in Iraq. The first one is to hold early parliamentary elections in order to resolve the current political impasse. There have been attempts to withdraw confidence from the Al-Maliki government. However, divisions within the opposition and bargains have prevented the opposition from arriving at a unified position. In fact, the Al-Maliki government is still supported by local political parties and external powers and it derives additional strength from a divided opposition. It seems the government will continue to be in office until 2014, unless the opposition unites and gains power.

The second scenario could lead to worsening situation (like in 2006-2007), in which sectarian violence turns Iraq into a failed state and a fertile ground for all kinds of extremist organizations. The sectarian violence could even lead to the dismemberment of the country into competing regions. But, most regional and international powers and analysts reject the likelihood of this scenario because it may threaten the security and stability of the whole region.

The third and more preferable scenario would be that all Iraqis – as well as regional and international powers with some influence in the country – engage in a comprehensive national dialog that might lead to a new formula of governance transcending all sectarian and ethnic considerations. This will rid the country of a heavy burden of the past and build a new Iraq for its entire population. Such a development would not only benefit its neighbors, it will also help the cause of stability and development in the region.