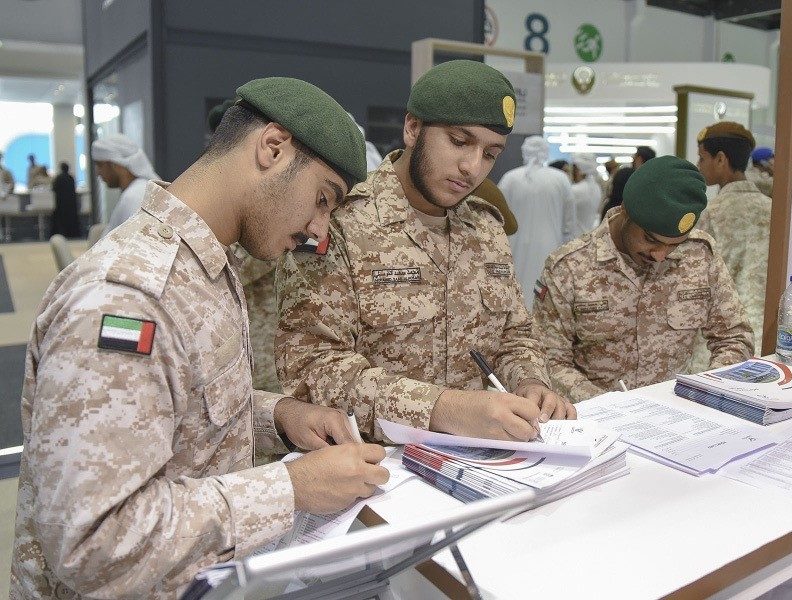 National Service recruits have arrived at their barracks and training grounds, reaffirming the UAE’s commitment to harnessing the full potential of Emirati youth; providing a better future for them, while enhancing the readiness and ability of the country to maintain and defend its achievements.

On Saturday, August 8, 2020, the National Service and Reserve Authority received the fourteenth batch of secondary school graduates enrolled in National Service. The recruits will undergo a training program developed in accordance with the best global practices. They will initially engage in basic training to familiarize them with weapons handling, and principles of military order and discipline. The training also enhances their physical fitness, reinforces national values and refines their leadership skills. After completing basic training, recruits advance to the specialized training stage, where they are taught the specifics of their chosen fields.

The concept of National Service, which has achieved many security, economic, social and political goals, is based on the insightful vision of the wise leadership. The essence of the idea is that service to the nation, through the defense of its achievements, raising its flag high and safeguarding its sovereignty, is a vital task that can only be performed with honest dedication by the people of the nation. It recognizes the magnitude of the security challenges facing the UAE, and the great responsibility entrusted to the youth, who are the building blocks of progress. They are entrusted with the task of maintaining the advancement of the country and the prestigious position it has achieved regionally and globally.

Federal Law No. 6 of 2014, issued on May 28 by His Highness Sheikh Khalifa bin Zayed Al Nahyan, President of the UAE, and Supreme Commander of the UAE Armed Forces (may God protect him), is a constitutional achievement. It introduced National Service, strengthening the defense and military capabilities of the UAE in facing potential crises and disasters, and contributed to enhancing security awareness to protect citizens from subversive ideologies, in addition to making them aware of the internal and external security issues that threaten the country.

The success of this national youth project is reflected in the consolidation of values of loyalty, belonging and sacrifice, and the promotion of the concept of good citizenship, making recruits aware of the UAE’s vision and goals. This is in addition to the role of National Service in reshaping and developing the character of young citizens.

The law on which National Service is based was introduced after extensive review of global practices in this field. It was primarily based on Article 43 of the UAE’s constitution, which states: “Defense of the Union is a sacred duty of every citizen and military service is an honor for citizens, which shall be regulated by law.”

When National Service was introduced in 2014, it made military service mandatory for young men aged between 18 and 30, for a period ranging between nine months and two years, depending on their educational level. It also launched a voluntary recruitment program for women, for nine months, in June 2014. The National Service Program was extended to twelve months in 2016 and sixteen months in 2018, as a national duty and responsibility to sustain the UAE’s security and stability, and to preserve the prosperity and happiness of its people.

In addition to its military goals, the National Service Program also focuses on the physical and mental wellbeing and development of recruits, to make them more productive, and able to serve efficiently and effectively. The aim is to encourage them to adopt healthy lifestyles, specifically physical fitness and a balanced diet. This is supported by exercise and workout plans practiced in growing increments, which contribute to raising the overall level of physical and mental fitness among the UAE’s youth; preventing many chronic diseases, such as high blood pressure and diabetes, which can be caused by unhealthy eating habits.

Major General Staff Pilot Sheikh Ahmed bin Tahnoon Al Nahyan, Chairman of the National and Reserve Service Authority, expressed the values of the National Service Program best when he said: “The love of the nation requires all of us to be committed to dedicated work and serious sacrifices. I am fully confident that the children of Zayed will live up to the responsibility, that they are able to bear the trust and that they will – God willing – advance their nation. Their children will reap in the future what they sow today. Therefore, they must work hard to best serve their nation and leadership with determination and resolve.”