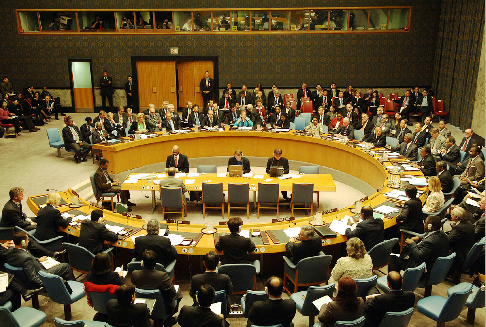 After intense deliberation, the United Nations Security Council has approved aid deliveries to Syria through a border crossing in Turkey. The compromise was reached after Russia and China blocked the resolution, which was based on a previously approved mechanism to allow the delivery of aid through two Turkish crossings. Tensions over the issue highlight ongoing international disagreement over the crisis, and cast doubt on the success of efforts to resolve it.

The UN Security Council discussions mirror the deep discord on Syria that exists between Council members. China and Russia maintained their opposition to the renewal of the humanitarian operation, which was authorized by the Security Council six years ago. It allowed for the delivery of humanitarian aid to Syria through four border crossings; two via Turkey, one through Jordan and another in Iraq. In response to the opposition, co-sponsors of the humanitarian resolution on Syria – Germany, Belgium and Kuwait – proposed another draft resolution as a compromise. The Council adopted the resolution to allow delivery of aid at Turkey’s Bab al-Hawa border crossing for one year.

Russia objected to the decision to extend the resolution, and called for limiting the border crossings to one, as it wants humanitarian aid to be channelled through the Syrian government. It argues that aid can be delivered to northwest Syria from within the country.

“Russia is consistently in favor of humanitarian deliveries to Syria with full respect of the country’s sovereignty and territorial integrity and with coordination of its legal government. This issue should not be politicized,” Dmitry Polyanskiy, First Deputy Permanent Representative of Russia to the United Nations, said after the vote.

In response, representatives from Germany and Belgium said in a joint statement: “One border crossing is not enough, but no border crossings would have left the fate of an entire region in question.”

Council members in support of the previous resolution were keen to ensure the smooth provision of humanitarian aid under the supervision of the United Nations. They fear aid could be used as political leverage by the Syrian government, especially amid ongoing efforts to revive a political resolution to the crisis, which is making slow progress despite the March cease-fire agreement between Ankara and Moscow.

However, humanitarian organizations believe one border crossing is not enough to adequately distribute aid to all regions in the country. Relief agencies operating in Syria have expressed grave concern that the situation could further deteriorate amid reports of the closure of the Bab al-Hawa crossing due to coronavirus. This would deny more than 1.5 million Syrians access to humanitarian aid. Following the UN Security Council’s resolution, the border crossing has become a lifeline for people in northwest Syria. Without the border access, aid cannot reach people in the region who depend on food and medicine provided by the UN, which would result in more suffering and loss of life.

Despite the importance of the resolution, agreed because “something is better than nothing”, it in fact does not meet the needs of the people in northwest Syria, where the humanitarian situation is deteriorating fast. The area is threatened by continued and indiscriminate bombings, the spread of coronavirus and the almost complete collapse of the health sector.

The Caesar Syria Civilian Protection Act, which came into force last month with a raft of US-led sanctions against the Assad regime, risks exacerbating the situation; increasing suffering, not just in northwest Syria, but throughout the country. Syria suffers serious economic problems, which have intensified after its currency collapsed to unprecedented levels, sparking large-scale protests, even in pro-regime areas.

The UN Security Council resolution has not solved the problem; humanitarian organizations are not in a position to operate effectively. The UN Security Council, whose mandate is to maintain international peace and security, and to protect civilians in conflict zones, must reconsider this vital issue. Moreover, member states that have paralyzed the Council since the beginning of the Syrian crisis must overcome their political differences and narrow interests, in order to alleviate the suffering of the Syrian people; rather than being the cause of continued tragedy in the country.