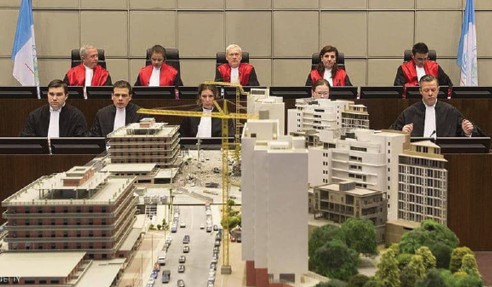 Fifteen years after the assassination of the former Lebanese Prime Minister, Rafic Hariri, and following a six-year trial, the Special Tribunal for Lebanon delivered its verdict on the case. Only one of the four defendants was convicted, while all belong to the Hezbollah militia, one of Iran’s proxies in the Arab world. This brings to an end one of the most complex and controversial political terrorism cases on a regional and global scale.

The verdict, which was delivered after 415 days of hearings, in which the tribunal heard the testimonies of approximately 290 witnesses and examined 3,131 pieces of evidence, was a surprise to observers and a shock to Lebanon’s Future Movement, founded by Hariri. The verdict acquitted the leadership of Hezbollah and its ally the Syrian regime, denying they had any involvement in the incident, and holding an individual fully responsible instead. This is amid repeated accusations that Hezbollah acts as though it is above the Lebanese state and its laws, and is attempting to impose its agenda on the country’s internal and external policies. Hariri, and the Future Movement by extension, were the main obstacles to the group’s plans, and a block to its ability to tighten control over the entire Lebanese landscape, turning it into a backyard for the ruling regime in Tehran.

Returning to the circumstances of the assassination, the case files indicated that it was a perfectly executed plot, using around two tons of highly explosive TNT in a truck bombing that killed Hariri and twenty-one others, injuring 226 people. Two weeks before the murder, French President Jacques Chirac and the then United Nations envoy to the Middle East, Terje Rød-Larsen, warned Hariri to be careful. The attack was preceded by an attempt to assassinate former Lebanese government minister Marwan Hamadeh, Hariri’s close friend. There is no doubt that a single person or small group, regardless of their capabilities, could organize, arrange or carry out these acts without the organized action, planning and logistical and technical support of an entity with significant capabilities.

Hezbollah denied involvement in the crime, taking no responsibility for it. The man convicted by the international tribunal, Salim Ayyash, has never appeared in court. The judges, however, unanimously agreed that he was involved in the assassination of Hariri and his companions. Three other suspects, Habib Merhi, Hussein Oneissi and Asaad Sabra, who were acquitted, have also never appeared before the court. They have not given any statements or testimony before any relevant body; they have not been dealt with in the way suspects are usually handled. They are all still free, under the protection of Hezbollah, whose Secretary General Hassan Nasrallah announced from the beginning of the investigation that the group rejects the international tribunal and all of its decisions, stressing they would not extradite any of the suspects. He went further and threatened to challenge any attempt to pursue the men.

After the verdict was announced, Saad Hariri, former Lebanese Prime Minister and the son of Rafic Hariri, accepted the ruling, but made his disappointment clear. He vowed, in the name of his family and the families of the other victims, to bring the criminals to justice, stating that they will not relinquish their right to justice. He called on Hezbollah, as it is clear the assassins came from their ranks, to make sacrifices for the sake of justice, and to stop protecting the defendants who believe they will never be brought to justice and receive their punishment.

Observers and experts on Lebanon see the court’s verdict, which can be appealed within one year, as a victory for Hezbollah, as the group was completely acquitted and its responsibility for the incident absolved. It is also a setback for the Future Movement, which was counting on the conviction of more of the defendants, or the total condemnation of Hezbollah as a political force, and the Syrian regime by extension. The result was not as expected, and will undoubtedly have implications for the political scene in Lebanon, specifically for cooperation between its actors, potentially reshaping its map of political alliances. The implications may become clear once the country recovers from the shock of the catastrophic Beirut port explosion on August 4, 2020, where suspicions are that Hezbollah controlled the port to transfer and store weapons.