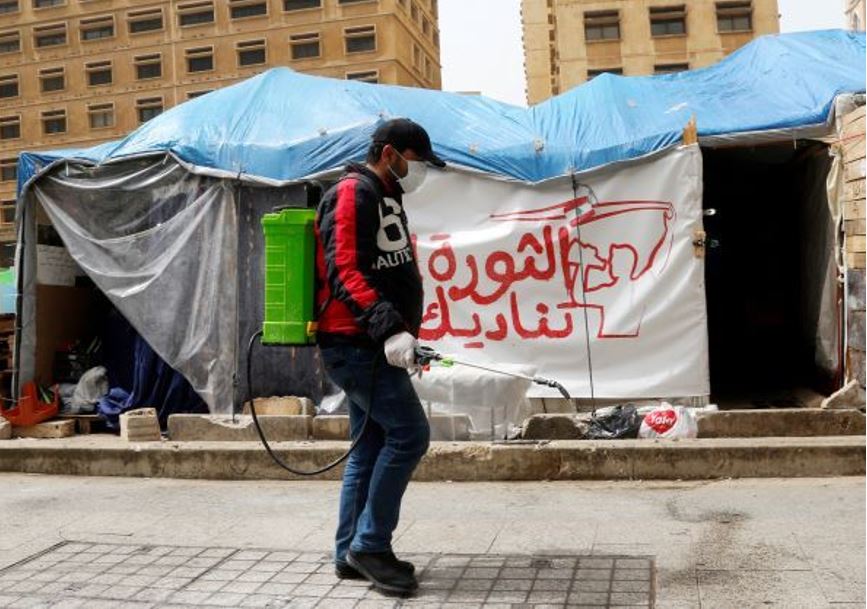 The Novel Coronavirus (Covid-19) pandemic has had a strong impact on popular uprisings calling for political, economic and social reforms in Algeria, Iraq and Lebanon. The virus transformed the streets and squares that were, until recently, filled with rallies and demonstrations into remains of tents and signage blown and torn by the winds of fear from this mysterious soldier that the governments quickly exploited to dampen the zeal and enthusiasm of activists.

While economic and social activities have declined remarkably across the world due to the growing fear of the virus spread, popular uprisings in the three Arab countries have been stricken by “virus phobia.” Even still, some activists are trying to restore the momentum of the crowds, even if it is a virtual momentum on social media platforms. However, these activists are being drowned out on social media by statements from officials, politicians and influencers warning about the pandemic’s danger and calling for social distancing. In fact, the attempts to keep the momentum going have led, in some cases, to describing these activists as being irresponsible and indifferent towards this global crisis, in which many countries are now suffering its distressful implications.

In Algeria the uprising started in February 2019, immediately after former President Abdelaziz Bouteflika announced his intent to run for another term. All corrective measures did not calm this popular revolt. Then came the coronavirus pandemic. The crisis provided the authorities a way to stop the uprisings peacefully; that is, without using security forces to disperse the demonstrations, which would probably have entailed human rights abuses. They simply mobilized the public to combat the pandemic, while stressing the importance of protecting the national economy. Government and health organizations put in place measures and warnings that eventually brought the demonstrations to a halt in mid-March. Protesters stopped convening due to fear of close physical contact with others, which they knew could spread the disease. Concern among the protesters grew amid the growing numbers of infected cases and announcements of deaths in provinces across the country.

The same solution emerged on the ground in Iraq, where protests erupted last October due to the deteriorating economic situation, administrative corruption, and unemployment. Protesters’ demands centered on toppling the regime, curbing Iran’s intervention in the country’s affairs, forming an interim government, and holding early elections. In Lebanon, the crowds took to the streets 16 days after the protests of Iraq erupted and called for excluding all political icons, tackling the economic situation, restoring embezzled funds, and holding those engaged in corruption accountable. Calls for staying at home and complying with the government instructions for combating the virus have become dominant in Iraq and Lebanon. Officials and politicians have not become the only source for these calls; other organizations and even leaders of the uprisings are calling for combating the virus.

The pandemic has helped these governments accomplish what their security apparatuses failed to do for months, using both carrot and stick approaches to stop the protests. It seems that current situation will continue until the virus threat is gone, after which protests may once again take place but no one knows when this might be.