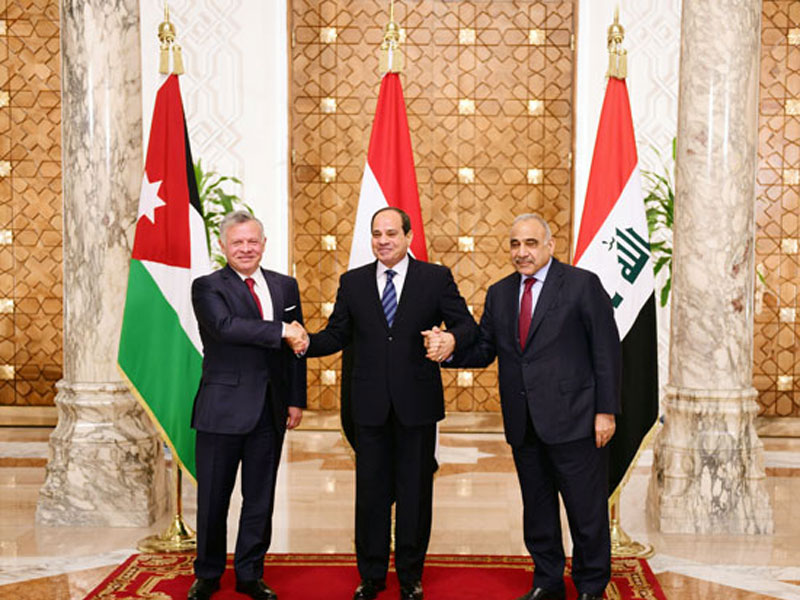 The summit sought ways to restore security and stability to the people of the region and discussed ways to strengthen their collective will to eradicate terrorism, as well as anyone who supports it through financing or armament. The leaders agreed that joint action was necessary to deal with the accelerating events in the region and the interference of some foreign parties in it. A discussion on economic, commercial and investment cooperation between the three countries also took place.

According to the summit’s closing statement, the priority for the three countries at this stage is to form an effective partnership, increasing coordination, cooperation and strategic integration in development, politics, security, and cultural areas. The leaders stressed the importance of strengthening tripartite cooperation, especially in the economic field, including electrical connectivity, energy projects, the formation of a common economic zone, the integration of resources between the three countries, and investment in skills and capacity-building. This is particularly important given the implications of the COVID-19 pandemic on health, food and economic security, so that these repercussions do not prevent continued coordination and cooperation in the targeted sectors. The closing statement also focused on sectors that can enhance the response of all three countries to the consequences of the pandemic, especially in the areas of health, medicine, education, energy, and intra-regional trade. This will be done through encouraging investment and economic cooperation.

Security and political issues were also foremost on the agenda of the summit. The three leaders reviewed regional and international developments, and efforts to resolve crises and strengthen regional security and peace. They emphasized the importance of the Palestinian cause, the need to pursue efforts to make just and comprehensive peace, and reiterated the right of the Palestinian people to an independent and sovereign state, with Al-Quds Al-Sharif (East Jerusalem) as its capital. This right is supported by international law, relevant international legitimacy resolutions and the Arab Peace Initiative. Their statement also highlighted the need to “stop Israel’s annexation of any Palestinian territories and any measures that undermine the chances of securing a just peace, including any attempts to change the historical and legal status quo in Jerusalem and its Islamic and Christian holy sites.”

The Arab issues addressed by the Amman summit were political in nature, refocusing attention on the issues tackled by Arab summits held in previous years, which discussed the challenges that hinder the stability and security of the peoples of the region. This was reflected in the leaders of the three countries affirming the importance of greater efforts to find political solutions to crises in Syria, Libya and Yemen, in accordance with relevant Security Council resolutions. They called for the preservation of the unity, independence and capabilities of these countries, to support Arab national security, and confront foreign intervention that aims to undermine it.

The development of the Grand Ethiopian Renaissance Dam was also discussed during the summit. The leaders underscored the need to reach a fair and balanced agreement on the basis of international law that safeguards the water security of Egypt and Sudan, which lie downstream from the dam. The statement reaffirmed Egypt’s water security as an integral part of Arab national security. Political stability in Iraq was also an important issue on the agenda. The leaders underlined the need to protect the sovereignty, security and stability of Iraq and to stand by it, and its people, to win the war on terrorism.

Holding the summit in Amman confirms the significance of Jordan, Egypt and Iraq in the Arab World, despite the multiple challenges they face. The people of the region have been impacted by a number of obstacles to their health, happiness and educational aspirations. They are also now fighting an intense battle against the COVID-19 pandemic, which has brought additional challenges, including unemployment and poverty. Meanwhile, people in other Arab countries, such as Syria, Yemen and Libya, face even more acute complications, from escalating political crises that threaten their security, to greater suffering due to terrorism and foreign interference that undermines their internal sovereignty and stability.