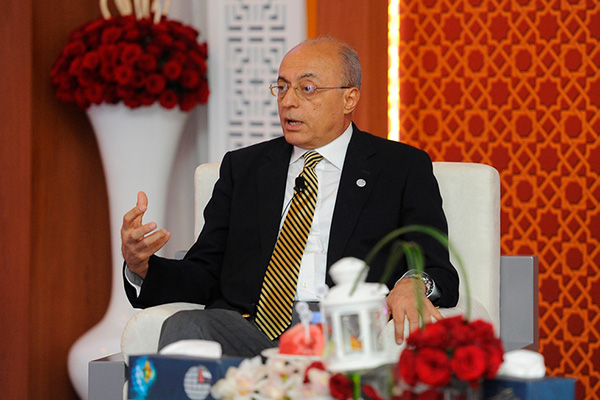 As part of the intellectual and cultural activities organized on the occasion of the Holy Month of Ramadan, The Emirates Center for Strategic Studies and Research held the first session of the Ramadan Strategic Dialogue on Tuesday, July 16, 2013, under the title: ‘The Future of Egypt After Muslim Brotherhood,’ delivered by General Sameh Seif El-Yazal, Chairman of Al Gomhouria Center for Political and Security Studies in Egypt.

General Sameh Seif El-Yazal lauded the Director General of the ECSSR, His Excellency Dr. Jamal Sanad Al-Suwaidi in shedding light on international and regional issues based on facts and on drawing strategic visions in line with future perspectives, in addition to spreading scientific research and culture at various levels.

As regards the rule of Muslim Brotherhood in Egypt, General El-Yazal stressed the importance of moderation in Islam for Arab and Muslim people at present and in the future, particularly when there are attempts to politicize the religion and as terrorism is being practiced under the cover of Islam to deceive and justify violence.