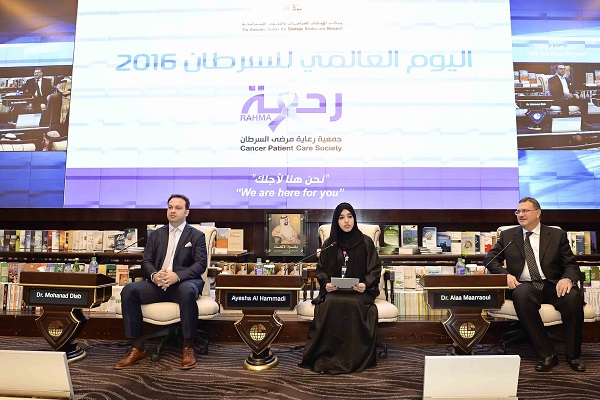 World Cancer Day is an annual event organized by the Union for International Cancer Control to raise awareness globally about the risks of cancer and to promote prevention, early diagnosis and treatment. Cancer is a major health issue confronting the world and a major cause of death around the world. The event organized by Rahma is a step to enhance its charitable and humanitarian activities on World Cancer Day.

The event began with a speech delivered by Ms. Nora Al-Suwaidi, Director General of Rahma, stressing the keenness of CPCS to spread awareness of the concepts of cancer prevention, as it is one of the objectives the CPCS has been working  to achieve since its inception. Ms. Nora referred to a global increase in the rates of recovery of this disease, as well as increased global awareness of ways to prevent it. Further, she noted that the CPCS puts its hands in the hands of all medical and health agencies, hospitals and associations active in this field, in order to serve the people of the United Arab Emirates, especially because many people are suffering from cancer and are in need of financial, social, medical and psychological support. Ms. Nora noted that the CPCS is seeking to put its motto "We are here for you" into practice.

Next, Dr. Mohanad Diab, Consultant, Medical Oncology and Bone Marrow Transplant, NMC Specialty Hospital in Abu Dhabi, delivered a medical lecture entitled “Understanding Cancer” in which he mentioned that there are 200 types of cancer necessitating different types of treatment, and that everyone might have cancerous cells inside his/her body every day, but fortunately the body overcomes them thanks to defensive cells His Almighty God created in the human body. He pointed out some of the symptoms that could indicate cancer. He also talked about known types of cancer, such as lung, breast, colon, blood, lymph node, among others. At the end of his lecture, Dr. Mohanad Diab stressed the importance of early detection, in addition to following a healthy lifestyle based on a set of principles, including eating healthy food, exercising, not smoking and avoiding saturated fats.

Later, Dr. Aladdin Maarraoui, Consultant, Chief of Hematology/Oncology, Mafraq Hospital in Abu Dhabi, delivered a lecture entitled “Cancer: The Disease of Our  Time; Latest Treatments and Modes of Prevention” in which he referred to the fact that the global mortality rate of cancer is becoming lower each year by two percent. He added that awareness of the prevention and the new discoveries in the methods of treatment are continually increasing; thus, recovery from most types of cancer, especially if detected early, has become possible. Dr. Aladdin Maarraoui also said that in 2015 alone, 50 new drugs for various types of cancer were produced. Turning to cancer prevention, he stressed the importance of avoiding smoking which is the main cause of many types of cancer. He provided several pieces of advice including eating healthy food, particularly vegetables and fruits, not drinking alcohol, and regular physical exercise.

Dr. Ashok Chandani, Physician at Oncology Department, Al-Mafraq Hospital in Abu Dhabi, spoke about the importance of a proper healthy diet in preventing the disease, pointing to the role of cumin, turmeric and garlic, for example, in enhancing the body’s immune system against cancer. He also underlined the importance of some fruits and vegetables in cancer prevention.

The event ended with a discussion session in which the attendees asked many questions and the two lecturers answered and interacted with them. Finally, Ms. Nora Al-Suwaidi, Director General of Rahma, thanked   the participants and the audience, and presented certificates of appreciation from the Society to the lecturers in recognition of their role in enhancing the understanding of cancer and ways of prevention.