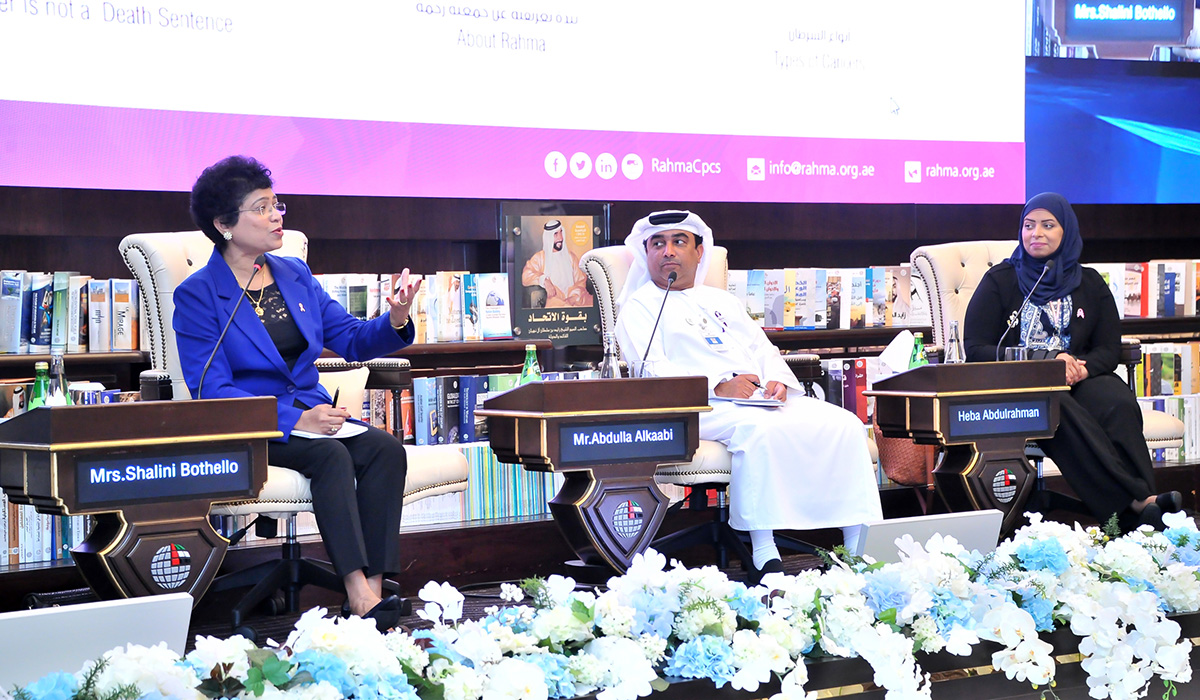 The Cancer Patient Care Society – Rahma organized an event to support cancer patients at the Emirates Center for Strategic Studies and Research (ECSSR) complex in Abu Dhabi at 10am on Thursday, October 17, 2019. The event was part of Rahma’s ongoing efforts to raise awareness of cancer. It was followed by a charity market, the proceeds of which will go to the Society, which provides care and support for cancer patients in the UAE.

Three presentations were delivered during the event, beginning with a brief introduction to Rahma from Abdulla Al Kaabi, Director General of Cancer Patient Care Society – Rahma. The second presentation was given by Heba Abdulrahman, Specialist at Sheikh Khalifa Medical City, in which she spoke about the four main types of cancer. The third presentation was delivered by Shalini Bothello, a breast cancer survivor.

The Cancer Patient Care Society – Rahma strives to serve the UAE community and closely engage with various national initiatives to help ensure their success. Mr. Al Kaabi introduced the Society, which was founded in 2015 by H.E. Prof. Jamal Sanad Al-Suwaidi, Director General of the ECSSR and Chairman of the Board of Directors of Cancer Patient Care Society – Rahma. He established the Society within a framework of societal responsibility, to serve people in the UAE and contribute to national efforts to address cancer, striving to eliminate the idea that “cancer is a death sentence”.

During his presentation, Mr. Al Kaabi touched on the foundation and development of Rahma, as well as its work to support cancer patients financially and psychologically. He detailed the mechanisms adopted by Rahma to review cases where patients seek financial help, and he explained the Society’s budgetary resources. In this context he referred to some of the challenges, such as a lack of permanent financial resources, as their budget depends on donations and Zakat funds. Other challenges include limited donations, the expense of cancer treatment and a lack of UAE cancer charities, which in turn places a burden on existing charities. Concluding, Mr. Al-Kaabi pointed out that the number of patients who have received financial support from Rahma has reached 178 people of twenty-five different nationalities, who have received a total of AED4.9 million.

In the second presentation, Heba Abdulrahman described the four types of cancer that are most common in the emirate of Abu Dhabi; breast cancer, cervical cancer, lung cancer and colon cancer. She explained that these types of cancer and their causes, which encompass genetic and external factors, are often related to patient lifestyles that stimulate cancerous cells. She went on to discuss the procedures followed to detect these types of cancer, and provided statistics on incidence rates globally. In 2018, for example, 2,088,849 women around the world were diagnosed with breast cancer. From that number, 626,679 patients died. Mrs. Abdulrahman stressed the importance of following the procedures to detect and help prevent cancer, including regular clinical screenings, X-rays and vaccinations.

The final presentation came from a cancer survivor who shared her experiences and stories of struggling with the disease. Shalini Bothello said that her experience with breast cancer, despite being difficult, had a bright side. She said: “Nine years after I was diagnosed with breast cancer, I have been able to combat what I call ‘the storm’, thanks to the support I received from the Cancer Patient Care Society – Rahma.” In her presentation, titled ‘Cancer Is Not a Death Sentence’, she told how, after believing she might die of breast cancer, she decided to change her approach and adopted a new direction. She drew on inner positivity to move toward hope and happiness, stressing that the difficulties we face constitute only 10 percent of the problem, whereas our reaction and how we deal with difficulties accounts for the other 90 percent. Bothello added: “Rahma is a source of inspiration for cancer patients, it is my love for Rahma that inspired me to attend this event.”

The Cancer Patient Care Society – Rahma has made a commitment to caring for cancer patients and providing them with psychological and financial support. The Society cooperates with all other entities in the UAE that combat cancer, supporting national efforts to one day eliminate this malignant disease.