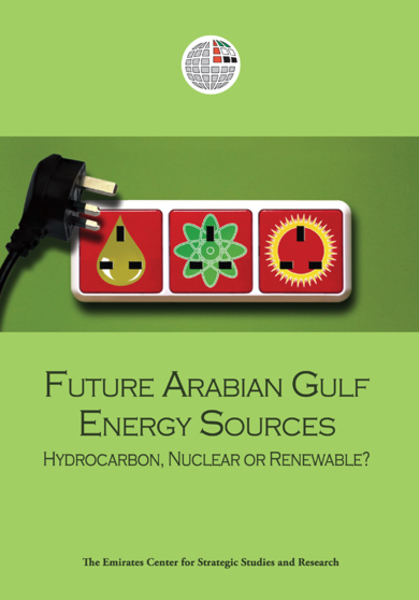 The Gulf Cooperation Council (GCC) countries have recognized the urgent need for a dramatic increase in electricity production in the coming decades in order to support rapid economic and social development in the region. The populations of the GCC countries are among the highest per capita users of energy in the world today, partly due to the harsh climate, but also to profligate use and inefficiencies in transmission and consumption. In order to meet future energy requirements, electricity generation must increase significantly and per capita consumption and waste decline dramatically. The economic development and continued urbanization of the Gulf region depend on energy from a variety of sources. It was with these challenges in mind that the Emirates Center for Strategic Studies and Research (ECSSR) convened its 13th Annual Energy Conference on November 19–21, 2007 in Abu Dhabi under the title Future Arabian Gulf Energy Sources: Hydrocarbon, Nuclear or Renewable?

Visiting experts and policy makers were invited to share their views on the future composition of the Gulf energy sector and the challenges faced by the Gulf states in meeting their growing energy needs.

This volume represents a valuable collection of these expert views, assessing trends and projections for Gulf energy requirements in the coming decades and addressing the need for greater conservation of energy and electricity, as well as methods with which to reduce the anticipated surge in demand.

It also examines the potential role of renewable energy in the Gulf in powering both electricity generation and transport, and assesses the suitability of Nuclear energy as an alternative source of power generation in the coming decades. Furthermore, the technical, geopolitical and strategic concerns surrounding the use of nuclear power in a vitally important region like the Arabian Gulf are considered.