Outlining the Future in an Age of Transformation 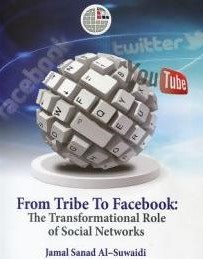 From Tribe to Facebook: The Transformational Role of Social Networks

Published by the Emirates Center for Strategic Studies and Research (ECSSR), this 165-page volume takes the accepted construct of the tribe as “a social, economic and political entity” and applies it to the digital age. It is the author’s contention that a new social system has been created by Facebook and other social media, including Twitter and LinkedIn: “Individuals have shifted from being tribal members to Facebook users.”

Al Suwaidi is well-placed to provide an informed, regional opinion on the transformational nature of such websites. As well as serving as director general of ECSSR, he is also an associate professor in political science at the UAE University in Al Ain and serves as a board member and chairman of several other academic institutions and public bodies.

Marshalling a diverse set of sources – research papers, news archives, conference notes, anecdotal evidence and statistical information – the author examines the impact that widespread internet penetration and social media usage has had on the regional landscape.

Facts tumble from his pages: of Facebook’s estimated 1.48bn users worldwide, 46.5m are to be found in the Arab world. Around a quarter of that number are located in Egypt (12.5m). The UAE boasts 3.4m Facebook users, putting it on a par with Tunisia, but behind Saudi Arabia, Morocco and Algeria.

Social media usage in the Emirates may be less by volume than some of its regional neighbours, but the UAE’s connected clan are among the most active. Al Suwaidi’s research estimates that 41.2 per cent of this country’s population are serial Facebook users, the highest proportion in the region. Likewise LinkedIn, the professional networking site, which is used by 14.8 per cent of the total population here.

But social media usage does not necessarily bring sweeping social change, as Al Suwaidi discusses in the context of the Arab Spring, which was heralded by some as a succession of digital revolutions that spread like wildfire across the region. The author disavows this notion: “Social media is no silver bullet when it comes to political change. The use of its tools – text messaging, email, photo-sharing, social networking, and the like – does not have a single preordained outcome.” Such tools quickly disseminated information, particularly across Egypt, but they did not topple regimes by themselves.

So what does the new online tribe look like? Al Suwaidi wisely pulls up short of predicting the precise shape of the future, but he does pick away at the seams of the issues that surround internet usage, not the least of which are social dysfunction, separation from reality and skewed value systems. These are the disconnects that our connected world promotes.

The author also tracks another unwanted change, the decay in the proper use of Arabic online. “A number of researchers have expressed concern that modern standard Arabic in the age of social networks could actually face the fate of Latin, which remains as a written form only, preserving its vocabulary and grammar but remaining unspoken.”

If social media provide an “outlet for the voiceless”, the matter of what language that constituency speaks in the virtual world remains unresolved.