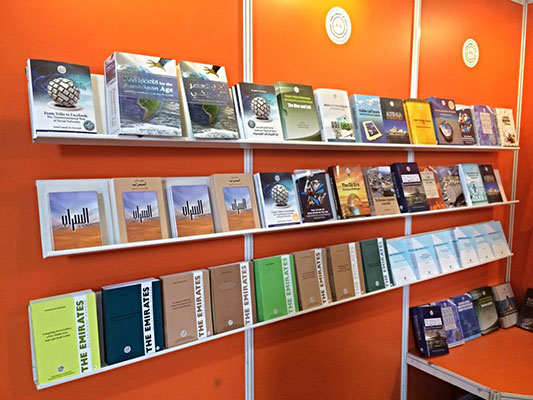 The ECSSR participated  in the New Delhi Book Fair 2015, from the 14th- 22nd of February, which was organized by the National Association of Books, a governmental body and part of the Human Resources Development Ministry in India. Around 1070 internal and external exhibitors took part in the book fair, which featured special pavilions for a number of international organizations such as the United Nations Educational, Scientific and Cultural Organization (UNESCO) , the World Health Organization (WHO) and the World Bank.

From its stand at the fair, The ECSSR showcased a wide range of its original and translated books and its series of studies and lectures in both Arabic and English. All material published by The ECSSR is pertinent to the UAE and Gulf in particular but the Arab world and the latest regional and international developments in general are also covered.

The most notable publications which were popular in the various national, regional and international book fairs in which The ECSSR has recently participated in, including the New Delhi International Book Fair 2015, were Prospects for the American Age: Sovereignty and Influence in the New World Order  (2014) and  From Tribe to Facebook: The Transformational Role of Social Networks (2013) authored by Dr. Jamal Sanad Al-Suwaidi, Director General of The ECSSR; Islamic Political Movements and Power in the Arab World: The Rise and Fall (2014,) prepared and edited by Dr. Jamal Sanad Al-Suwaidi and Dr. Ahmed Elsafty; a translated book entitled Politics and Power  (2012)  by Warren Kidd, Karen Legge, Philippe Harari; Start with Why: How Great Leaders Inspire Everyone to Take Action, (2013) by Simon Sinek, which received wide acclaim when it was released in English and the Future Wars in the Twenty-First Century (2014). These are in addition to The ECSSR periodicals on sale there: Strategic Visions magazine, the Strategic Studies series and the Global Studies series  which address diverse national, Gulf, regional and global issues.

The ECSSR participation in the New Delhi Book Fair 2015 comes within the framework of its continuing presence in regional and international cultural events, which provides the opportunity for a greater number of readers, researchers and decision makers across the world to read its publications.