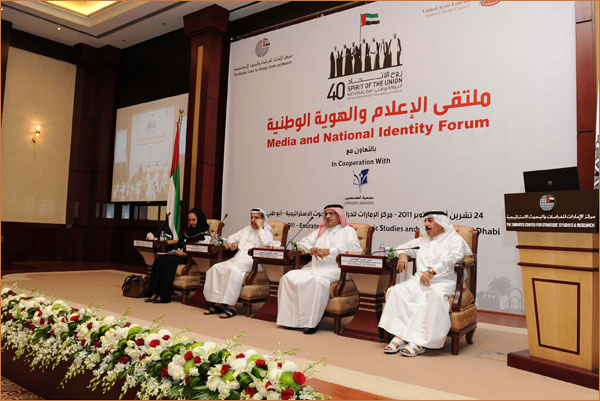 HE Sheikh Hamdan bin Mubarak Al Nahyan, Minister for Public Works and The National Media Council (NMC), inaugurated the ‘Media and National Identity Forum’ on October 24,  2011. The Forum is being organized by The National Media Council (NMC)  and the Emirates Center for Strategic Studies & Research (ECSSR), in collaboration with Journalism Association. A distinguished group of experts, intellectuals and media personalities are participating in the activities of the forum.

In his Welcoming Remarks, HE Dr. Jamal Sanad Al-Suwaidi, Director General of the ECSSR, observed that the Forum presents a great occasion for exchange of ideas and views on national identity and the role of the media in influencing the level of awareness on national identity in the UAE. He stressed that the issue held exceptional importance on the agenda of our prudent leadership, particularly President of the UAE H.H. Sheikh Khalifa bin Zayed Al Nahyan.

Dr. Al-Suwaidi added that the whole world has praised the UAE’s experience as a country of cultural pluralism and an example of coexistence between different beliefs and cultures. However, there is a keen interest in this country to hold on to its national identity and cultural particularity, including its traditions, norms, values and ways of living.  Dr. Al-Suwaidi concluded that holding on to the national identity does not mean becoming reclusive in a globalized world, characterized by new revolutions in Information Technology and mass communications.