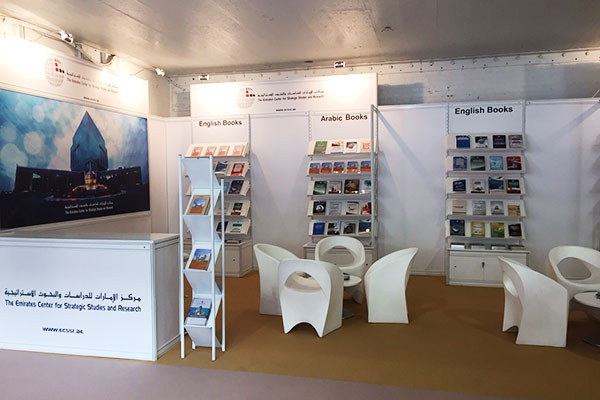 The Emirates Center for Strategic Studies and Research (ECSSR) participated in the 44th London Book Fair, held from 14-16 April 2015. It is one of the biggest international fairs in terms of the number of participants and cultural activities that are held on its sidelines. The fair and events associated with it were attended by scholars and researchers from around the world.

The ECSSR participation at the fair this year coincided with the Center’s publications crossing 1,100, including refereed scientific studies series, in Arabic and English. These publications analyze strategic, political, military, economic, and social issues that are of interest to the UAE and the region as well as the most critical regional and global developments.

The ECSSR’s presence at the London Book Fair was the outcome of its keenness to participate regularly in book fairs in Arab and Gulf region and those around the world. This shows that the Center wants to register its presence at major events and showcase its publications. It also wants to learn about the most recent scholarly and academic publications from various international publishers.

Among the most recent publications showcased at the London Book Fair was the fifth edition of The Mirage by His Excellency Dr. Jamal Sanad Al-Suwaidi, Director General of the ECSSR. The book’s first edition was launched in the beginning of 2015 and has since received wide acclaim and appreciation from academics, researchers, and cultural and intellectual circles in the Arab region and internationally.

This rousing response has not only been due to the central thesis of the book – which is the political thought of religious groups in the region and the illusion they are trying to create by mixing religion with politics to gain authority – but also because of the scientific approach it follows. The book has also been acknowledged for including a survey of UAE nationals and residents on those groups, which provided accurate data regarding opinion on these groups and political Islam in general.

At the London Book Fair 2015, the ECSSR also showcased Islamic Political Movements and Authority in the Arab World: The Rise and Fall (2014), which has been edited by H.E. Dr. Jamal Sanad Al-Suwaidi and Dr. Ahmed El-Safti. This book evaluates the experiences of Islamist parties and movements in the exercise of governance and power, particularly following the ‘Arab spring’. The Future of Warfare in the 21st Century (2014), which deals with the changing nature of warfare, new threats to national security and political and civil aspects affecting future wars, was also on display at the fair. The Book Fair also showcased Prospects for the American Age: Sovereignty and Influence in the New World Order (2014) by H.E. Dr. Jamal Sanad Al-Suwaidi, which presents an objective analysis of the current world order and the distribution of power in it. It is based on the central idea that the United States of America will remain the dominant power of the new world order over the next 50 years. It is supported by data and information proving American supremacy beyond doubt.

Other books showcased by the Center at the London Book Fair include the Arabic translation of Start with Why: How Great Leaders Inspire Everyone to Take Action (2013), which has received wide acclaim since it was released in English. The book offers a clear vision of the requirements for leadership and inspiration. Also available was Unconventional Fossil Fuels: The Next Hydrocarbon Revolution?, which is a collection of working papers submitted by a group of distinguished experts and academics from the petroleum and energy sector during the 19th ECSSR Annual Energy Conference held from 29-30 June 2013.

The ECSSR was also part of the Paris International Book Fair, which was held in March this year. During this fair, the Center’s publications became popular among foreign readers, scholars and researchers, owing to their comprehensiveness and objectivity in dealing with regional and international issues.

The ECSSR has participated in the following editions of the fair: