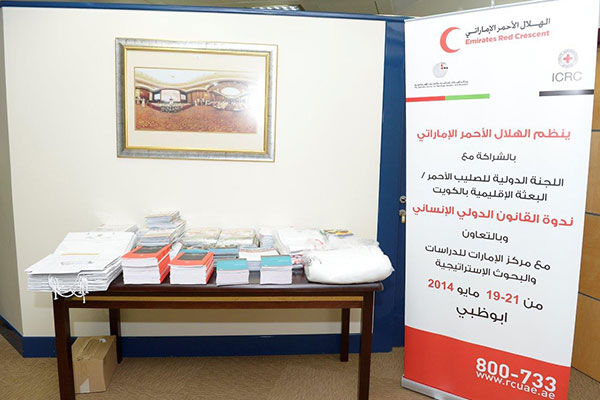 On May 19–21, 2014 the Emirates Center for Strategic Studies and Research (ECSSR) hosted a seminar at its office complex on International Humanitarian Law organized by the Emirates Red Crescent in partnership with the International Committee of the Red Cross Regional Delegation in Kuwait. The seminar audience included a large number of international humanitarian law specialists, media representatives, researchers and interested members of the public.

In her welcoming speech, Ms. Mariam Mubarak Al-Marri, Director of Media and Public Relations for the Emirates Red Crescent, thanked the ECSSR for its enduring cooperation with the organization and its commitment to disseminating the concepts of international humanitarian law. The seminar sessions began with a lecture on the “Contributions of the Emirates Red Crescent in Humanitarian Fields” delivered by the former advisor to the Secretary-General of the ERC, Dr. Salih Al-Ta’i.

Regional Director of Communications and Publishing at the International Committee of the Red Cross GCC Regional Delegation in Kuwait, and the Official Spokesman of the Delegation, Dr. Fouad Bawaba, delivered a lecture on the “Concept of International Humanitarian Law: Its Origins, Sources and Principles.”

Mr. Ahmad Al-Tayyib Sulaiman, Representative for International Cooperation at the International Committee of the Red Cross GCC Regional Delegation in Kuwait, gave a lecture entitled “Safe Access” in which he emphasized the importance of providing safe access for volunteers to areas inhabited by vulnerable populations during armed conflicts, civil wars, disasters and crises.

Dr. Fouad Bawaba delivered a further lecture on “Protected Persons,” in which he presented a list of the groups protected by international humanitarian law.

The seminar participants toured the ECSSR’s UAE Federation Library, where they were introduced to its various sections, books, periodicals and databases, with a focus on those resources relevant to international humanitarian law. They were impressed by the library and its diverse holdings and resources in a range of different areas of study, and the opportunities it provides for the researchers who use its facilities. They considered it to be a prominent cultural symbol, not only for the UAE but the entire region.

The seminar participants also visited the ECSSR’s Media Department, where they were introduced to its work and procedures.