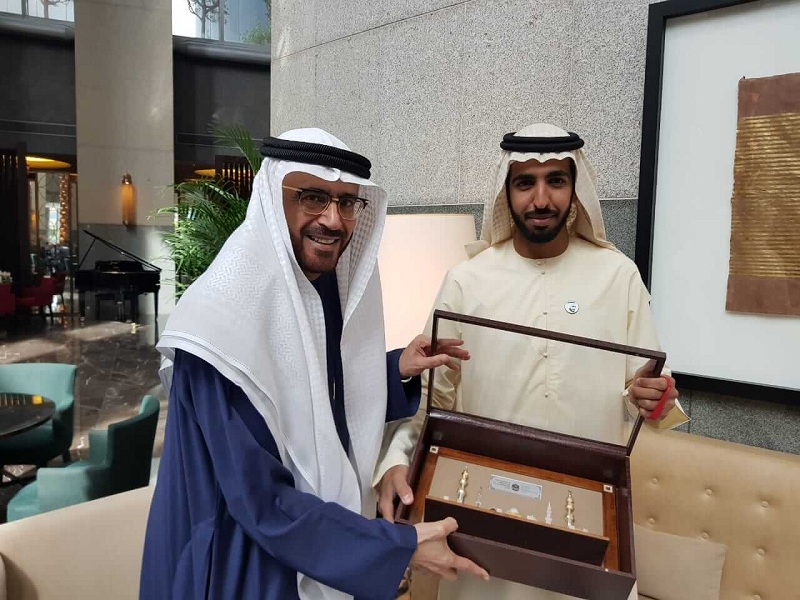 In recognition of his efforts to illuminate the path of science and knowledge for future generations, His Excellency Sheikh Shakhbout bin Nahyan Al Nahyan, UAE Ambassador to Saudi Arabia, has awarded the Shield of Honor of the UAE Embassy in Riyadh to His Excellency Prof. Jamal Sanad Al-Suwaidi, Director General of the Emirates Center for Strategic Studies and Research (ECSSR). Prof. Jamal Sanad Al-Suwaidi was also honored for his considerable contribution to the UAE’s renaissance and development.

H.E. Sheikh Shakhbout also commended the Abu Dhabi-Makkah Run initiative in which Dr. Khaled Jamal Al-Suwaidi, ECSSR Executive Director, has taken on the huge challenge of running from Abu Dhabi to Makkah. The run is intended as an expression of appreciation for the strong ties between the UAE and the Kingdom of Saudi Arabia.

Prof. Jamal Sanad Al-Suwaidi thanked H.E. Sheikh Shakhbout, and the UAE Embassy in Riyadh, for all their efforts in facilitating the Abu Dhabi-Makkah Run, reflecting the government’s unwavering support for its citizens. He also expressed deep pride in his son, Dr. Khaled, for taking on the challenge with a determination and ambition that has been embodied by many months of rigorous preparation.

Dr. Khaled continues with the Abu Dhabi-Makkah Run initiative, which began on February 01, 2019, from Sheikh Zayed Grand Mosque. The unprecedented challenge will see him cover 2,070km in 38 days of continuous running and walking.