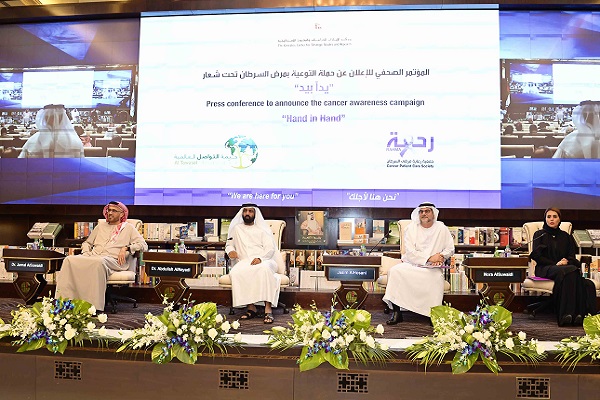 The Emirates Center for Strategic Studies and Research (ECSSR) hosted the “Hand in Hand” campaign, aimed at raising community awareness of cancer and ways to prevent it, on Wednesday, January 13th, 2016. This campaign includes the implementation of a range of local and global initiatives aimed at raising awareness of the dangers of cancer, possible ways to prevent it, and training on methods to cope with it, particularly those methods that have proved effective in developed countries. This significant national campaign is joined by the Cancer Patient Care Society (CPCS) – Rahma and Al Tawasol International Tent.

The impetus for naming this campaign “Hand in Hand” was to confirm the importance of solidarity with cancer patients, and to assure them that they are not alone in the face of this disease—because when the whole community, individuals and institutions, stands by cancer patients, it gives them and their families the belief that they are able to challenge the disease, and eventually to defeat it.

The “Hand in Hand” campaign was born following a thorough study facilitated by the conducive environment provided by the United Arab Emirates to its people. Therefore, it is expected that this campaign will achieve significant positive results by raising awareness among members of the community of the importance of early detection of cancer, methods of coping with it positively, and the places to get proper treatment at the right time. This will be achieved through the e-platform that will be provided by the campaign, which will be a comprehensive and permanent reference for those wishing to familiarize themselves with the disease, methods of treatment, and consultative centers, as well as a forum for people to share their successful experiences in therapy. The e-platform will also include an electronic library. This will contribute to the dissemination of knowledge locally and globally, and to reducing the number of cancer cases.

Moreover, as part of the campaign’s program, the First International Conference and Exhibition on best practices in the fight against cancer will be held in Abu Dhabi in November 2016. It will be the first of its kind at the GCC level.

This campaign will enable the United Arab Emirates to leave an imprint on the global fight against cancer. Therefore, this campaign, with all the global initiatives it includes, will be an honorable and exemplary model to be followed all over the world. Moreover, this experience will be documented under the title “The UAE’s Experience in the Fight Against Cancer,” and the document will be shared with our brothers in GCC states and around the world. Local and international companies have already been selected to implement this campaign, and agreements have been signed with them as strategic partners. The first batch of this campaign’s programs and initiatives will be launched in the Western Region. It will include events and activities to be presented for the first time, blending education, awareness, prevention and entertainment in a distinct and specialized form, to entrench the concepts of early detection and knowledge of the disease.

While the Cancer Patient Care Society – Rahma and Al Tawasol International Tent are taking part in this campaign, the organizers hope various national institutions, both public and private, will join it in the coming period, to strengthen the campaign’s partnership with the community through contributions, sponsorships, and playing the social role of increasing community awareness of the disease.

The launch of this awareness campaign highlights the need to spread hope in the hearts of patients, and to provide examples of cancer survivors who have defeated the disease and recovered, as this is the best way to support patients emotionally and psychologically, and to give them hope to renew their energy and maximize their ability to face this disease. Raising hope is absolutely an integral part of treatment, and is one of the main objectives behind the launch of this campaign.

On the sidelines of the press conference launching the campaign, H.E. Dr. Jamal Sanad Al-Suwaidi, Director General of the ECSSR and Chairman of the Board of CPCS, said that this “Hand in Hand” campaign falls within the framework of the UAE’s consistent efforts to defeat cancer, and that the CPCS will work hard to make this campaign a significant national event aimed at educating young people, and the community as a whole, of the dangers of cancer, and of the importance of preventing this disease and all other diseases.

H.E. Dr. Jamal Sanad Al-Suwaidi also expressed his deepest thanks and appreciation to the wise leadership of the UAE for its consistent and constant support for everything that is in the interests of the homeland and citizens. His Excellency said, “We derive inspiration from our wise leadership and its perseverance in acts of charity and the service of the nation.” He added, “The gracious leadership of the state has, as always, worked with us step by step and hand in hand in the founding of Rahma, which was established under the patronage of His Highness Sheikh Mohammed bin Zayed Al Nahyan, Crown Prince of Abu Dhabi and Deputy Supreme Commander of the UAE Armed Forces, may God protect him.” He concluded by saying that the “Hand in Hand” campaign fulfills the vision of our wise leadership, which is aimed at making the UAE a healthy state in which neither cancer nor any other disease poses a threat to human health.

Ms. Nora Al-Suwaidi, Director General of CPCS, said that the “Hand in Hand” campaign aims to achieve a number of targets, including raising awareness of cancer risks and sending a message of unity and sympathy to cancer patients, may God grant them full and speedy recovery. It is a message of love from CPCS and the whole UAE community. Moreover, the campaign aims at encouraging people and various state institutions to provide support for the CPCS, which aims to organize innovative mechanisms to support cancer patients, relieve their suffering, and educate their families and friends on how to offer the best care and support for cancer sufferers.

Dr. Abdulla Al-Neyadi, Chairman of Al Tawasol International Tent, expressed his belief that this campaign will enjoy considerable official and popular support, and will contribute significantly to educating the community about cancer, the means to prevent it, and the ways to deal with it.

Dr. Ali Al-Shuaibi, Media Advisor, stressed that the “Hand in Hand” cancer awareness campaign falls within the policy of unlimited giving pursued by the United Arab Emirates under its wise leadership, and that this campaign is a platform that will attract all members of the UAE society to join the UAE in giving. He stressed that the UAE has today become a global platform for humanitarian campaigns. “Through this campaign, we are trying to mobilize all segments of society under the slogan ‘Hand in Hand we will defeat cancer,” he added.

The conclusion of the press conference featured a lively discussion about the “Hand in Hand” campaign and the challenges it might face in the future, particularly with regard to the issue of the lack of accurate data on cancer and on the rate of cancer cases in the UAE. Moreover, the debaters discussed the opportunities for cooperation between the parties supervising the campaign on the one hand, and the Ministry of Health and other health authorities in various emirates on the other. Emphasis was placed on the campaign’s volunteering process; it was stressed that the door is open for everyone to contribute through volunteer work.