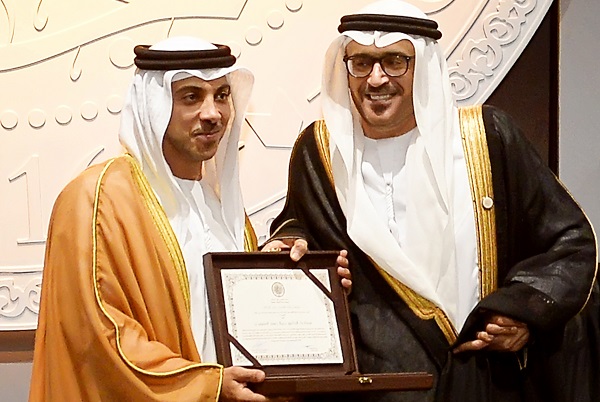 On Sunday, May 1, 2016, H.E. Dr. Jamal Sanad Al-Suwaidi, Director General of the Emirates Center for Strategic Studies and Research (ECSSR), the recipient of the 2015/2016 Sheikh Zayed Book Award for Contribution to the Development of Nations’, was honored during a ceremony held along the sidelines of the 2016 Abu Dhabi International Book Fair. The honoring ceremony, was organized by the Sheikh Zayed Book Awards committee under the patronage of His Highness Sheikh Mohamed bin Zayed Al Nahyan, Crown Prince of Abu Dhabi and Deputy Supreme Commander of the UAE Armed Forces.

H.E. Dr. Jamal Sanad Al-Suwaidi received the award for his book, The Mirage, which addresses the intellectual, political, cultural, social and ideological phenomena of religious-political groups. From a historical perspective, The Mirage analyzes the trajectory of these groups following their rise in the early 20th century and seeks to dismantle the widening cultural gap between the Arab and Western worlds. Due to the practices and ideologies of such groups, the book delves into the subsequent problems that have hindered paths of development, enlightenment, modernity and progress within the Arab and Islamic regions.

The Mirage, published in early 2015, has been well received and appreciated by Arab and international academia alike. The book has been highly regarded as a valuable and credible contribution to the available literature on political Islam due to the comprehensive research methodologies and the applied and theoretical analysis frameworks employed.

In a bid to dismantle the illusions that surround the notions of political religious groups in the Arab and Islamic regions – and indeed the world at large – The Mirage has been released in Arabic, English and French. The scholarly insight regarding these political Islamic groups has helped to shed light upon the differences between Islam and the ideologies of these groups; and has contributed to exposing the truth behind the veiled and alluring slogans used in the promotion of these groups in a way that is understandable to multi-cultural readers intellectuals, political authorities, and international human rights organizations.

The book is one of the top selling books on Amazon.com and has received significant attention from specialized online bookstores such as Nook Books of Barnes & Noble and Kobo Books. In particular, Nook Books described The Mirage as an exceptional representation of an intellectual challenge and that it will change the way the West views Muslim and Arab communities. Similarly, Kobo Books described it as a rare book that is capable of changing the modern day rhetoric, thoughts and political landscape concerning Islam, the Middle East and Muslim communities.