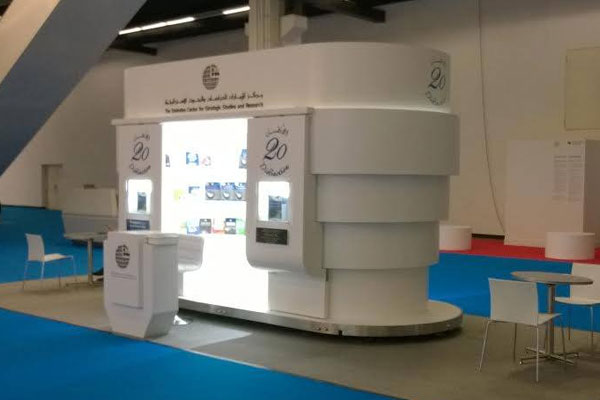 The Emirates Center for Strategic Studies and Research (ECSSR) is taking part in the Frankfurt International Book Fair held in Frankfurt in Germany from October 8 until 12, 2014. The ECSSR will showcase a selection of the center’s recent publications in Arabic and English which, through research and analysis, cover various strategic, political, economic, social, and information issues with relevance to the Gulf, in particular, and the Middle East and the Arab World, in general, in addition to the most important regional and global developments in the areas of international relations, security and military affairs, and energy issues.

Among the ECSSR’s most recent publications to go on display in the fair is Prospects for the American Age: Sovereignty and Influence in the New World Order, authored by Dr. Jamal Sanad Al-Suwaidi, the ECSSR’s Director General; this is the book which received great attention and appreciation from politicians, academics, and researchers in the Gulf region, the Arab world, and the whole world. The ECSSR will also show the book The Future of Warfare in the 21st Century which addresses the changing nature of warfare, the new threats to national security, and the political and civil factors affecting future wars. Another title to go on display by the ECSSR is Labor Mobility: Enabler for Sustainable Development which explores labor migration in the GCC and the wider Asian region as well as the implications of labor mobility on human development and the societies at both home and host countries.

The ECSSR’s participation in Frankfurt International Book Fair is in keeping with the ECSSR’s commitment to take part in this annual cultural event in order to directly interact with international publishers and experts in the publishing industry especially that the ECSSR’s publications are very popular among foreign readers, researchers, and intellectuals. It is also considered an ideal opportunity to obtain the translation and publication rights of the works of internationally-renowned authors who are known to be experts in the fields of international relations, security, and energy issues.

The Frankfurt Book Fair is considered the world’s largest and most important international cultural event focusing with writers and literature in general. Every year, tens of thousands of intellects, writers, researchers and publishers gather from all around the world, and tens of thousands of titles from all cultures are showcased. This is the fair’s 66th edition, and it has attracted more than 7,000 exhibitors.

The ECSSR has participated and exhibited its collection of Arabic and English publications in the following previous sessions: