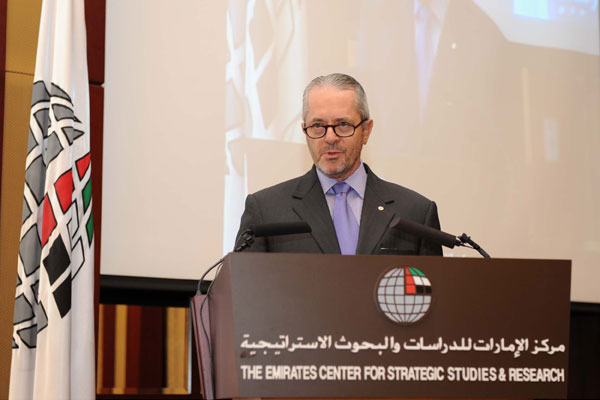 The Emirates Center for Strategic Studies & Research (ECSSR) hosted the Fourth Regional Seminar of Arab Diplomats on International Humanitarian Law (IHL) on May 7-10, 2012. The seminar was organized by the International Committee of the Red Cross (ICRC) in collaboration with Ministry of Foreign Affairs.

The event covered subjects ranging from the definition of the IHL and the sources of its origin, its distinction from the International Human Rights Law and issue of the protected people and places in the IHL. The seminar explained the great significance of the IHL to diplomats and their role in executing its rules.

Participants at the seminar discussed the role the ICRC in armed conflicts, protection of cultural properties and environment during such conflicts and the mechanisms for the implementation of the rules of IHL at the national level. Finally, light were shed on the role and jurisdiction of the International Criminal Court (ICC).

The seminar drew on an elite group of diplomats, academicians and experts that specialize in IHL.

The Director General of the ECSSR, HE Dr. Jamal Sanad Al-Suwaidi stressed that the seminar draws its significance from the important role diplomats play in implementing international humanitarian rules and procedures. He called for the convening of a global diplomatic campaign in order to meet the challenges facing the implementation of the rules of the IHL.

He emphasized the need to activate international humanitarian law to counter all forms of violations of people’s rights under military occupation, and to combat all forms of terrorism and violations of human rights and fundamental freedoms in the world. He also said that diplomats, particularly Arab diplomats, should seriously carry out their humanitarian responsibilities.