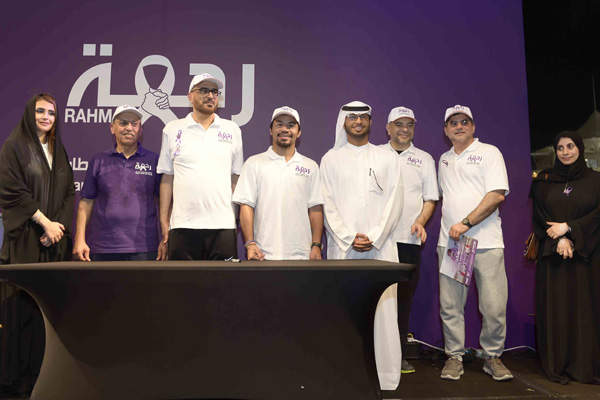 Amid the participation of thousands of citizens, residents and visitors of all ages and nationalities, the Cancer Patient Care Society (CPCS) – Rahma – concluded its first community event on Saturday, November 7, 2015 at the Yas Marina Circuit, Abu Dhabi. The astounding number of willing participants were presented with the option of either walking around the Formula 1 racetrack for a total of 3km, or alternatively, cycling twice around the track. There were also a number of recreational and cultural activities that the whole family was able to enjoy including going home with, The Mirage, one of the latest books by His Excellency Dr. Jamal Sanad Al-Suwaidi, Director General of the Emirates Center for Strategic Studies and Research (ECSSR) which was distributed at the event. The Mirage has so far been published in three different languages – Arabic, English and French – and has been welcomed by regional and international experts and academics alike. RAHMA YAS, the first of its kind to be organized by Rahma, aimed to raise awareness about the Society and its noble, humanitarian objectives; in addition to attracting volunteers and donors eager to offer their support.

The event was attended by a number of prominent figures, including: His Excellency Sheikh Nahyan bin Mubarak Al Nahyan, Minister of Culture, Youth and Community Development; and His Highness Sheikh Zayed bin Sultan bin Khalifa Al Nahyan, Chairman of the Board of Trustees for the Sultan bin Khalifa Al Nahyan Humanitarian and Scientific Foundation. His Excellency Dr. Jamal Sanad Al-Suwaidi, Director General of the Emirates Center for Strategic Studies and Research (ECSSR) and Chairman of the Board of Directors of Cancer Patient Care Society (CPCS) – Rahma was also in attendance, as were several other esteemed guests. International boxing legend, Manny Pacquiao, aka “The People’s Champion,” notably participated in the event—where he expressed his pleasure at visiting the United Arab Emirates and his personal involvement in “RAHMA YAS.” He hoped that his presence had helped to not only raise awareness about Rahma and the organization’s objectives but also with regards to the collection of the largest possible amount of money in support of such a unique charity. Manny Pacquiao presented the Cancer Patient Care Society – Rahma – with a very generous donation of US $50,000.

The Cancer Patient Care Society (CPCS) – Rahma – was established following a decision taken by the Abu Dhabi Executive Council, UAE. It was launched under the patronage of His Highness Sheikh Mohammed bin Zayed Al Nahyan, Crown Prince of Abu Dhabi and Deputy Supreme Commander of the Armed Forces (may Allah protect him), on September 15, 2015. Acts of charity and volunteer work help Rahma to operate effectively, and as a result, brings the charitable organization one step closer to achieving a number of its honorable objectives, namely: to mobilize society’s human resources by attracting volunteers to join Rahma; providing information to patients, affording them a better understanding of the disease and the best available options for treatment; educate families and friends of patients on how to offer the best care and support for cancer sufferers; contribute to educating the community about the dangers of cancer, its causes and means of prevention; as well as building a comprehensive world-wide database of the best hospitals and medical centers specialized in cancer treatment.

Speaking at the end of the first Rahma community event, H.E. Dr. Jamal Sanad Al-Suwaidi, Director General of the Emirates Center for Strategic Studies and Research (ECSSR) and Chairman of the Board of Directors of Cancer Patient Care Society (CPCS) – Rahma – revealed how Rahma aims to educate each and every member of society about the importance of exercise and living a healthy life style in view of reducing the risk of being diagnosed with cancer. He added that there are a number of other community orientated, charity events currently being planned by Rahma, which will subsequently build upon the concerted efforts that have already been undertaken by the UAE and the Government of Abu Dhabi in the fight against cancer.

Dr. Al-Suwaidi noted how the wise leadership of the UAE has clearly prioritized the health of citizens and residents alike. Dr. Al-Suwaidi also extended his own personal gratitude for the notable support that has been consistently offered by the UAE leadership to Rahma ever since the organization’s establishment, which was formed under the patronage of His Highness Sheikh Mohammed bin Zayed Al Nahyan, Crown Prince of Abu Dhabi and Deputy Supreme Commander of the Armed Forces (may Allah protect him).

Ms. Nora Al-Suwaidi, Director General of the Cancer Patient Care Society (CPCS) – Rahma – expressed her delight over the resounding success of RAHMA YAS as illustrated by the huge turnout among which included an astonishing number of willing participants. She was thrilled with the way in which the important message regarding the importance of sporting activities, regular exercise and maintaining a healthy lifestyle as a means of lowering the risk of cancer was both delivered by event organizers and received by those in attendance. Ms. Nora Al-Suwaidi was quick to point out that the event was intended as a means of displaying solidarity and compassion to those who are suffering from cancer (may God cure them). She also expressed her deep sense of pride and happiness with regards to the participation of a number of senior figures who were at the forefront of RAHMA YAS. She noted that: “We have always been supported by the wise leadership whose support for the benefit of the nation, its citizens and residents alike has never wavered. She noted that this generous support in this regard offered was a key motivating factor behind Rahma and notably contributed to the success of its first community event.