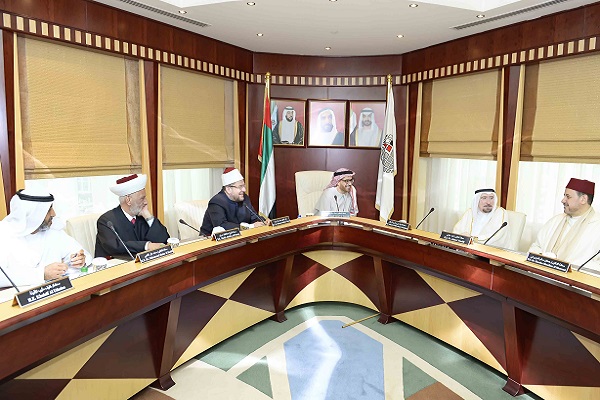 The Emirates Center for Strategic Studies and Research hosted, on Sunday and Monday, January 17-18, 2016, the proceedings of " First Arab Thinkers Forum," at its premises in Abu Dhabi. A large group of Arab intellectuals participated, including, notably, H.E. Dr. Jamal Sanad Al-Suwaidi, Director General of the ECSSR, and a number of Muslim and Christian religious figures, including H.E. Dr. Mohammed Mokhtar Gomaa, Minister of Religious Endowments (Awqaf), Head of The Supreme Council for Islamic Affairs, Member of the Islamic Research Academy, and Chairman of The Moderation  and Tolerance Forum in the Arab Republic of Egypt; H.E. Dr. Mohammed Matar Al Kaabi, Chairman of the General Authority of Islamic Affairs and Endowments in the United Arab Emirates; His Eminence Sheikh Abdel-Latif Derian, Mufti of the Lebanese Republic; and Father Miguel Ángel Ayuso Guixot, Secretary of the Pontifical Council for Interreligious Dialogue at the Vatican; along with an elite group of clerics, intellectuals and Arab and international scholars and academic figures.

In his opening remarks, H.E. Dr. Jamal Sanad Al-Suwaidi stressed the importance of the forum, which discussed the issues of terrorism and extremism, ways to address them at the Arab, Islamic and global levels, and the role of the true culture. It predicted the major challenges facing the Arab and Muslim nations and the world at large in this respect, and set out practical solutions to deal with these formidable challenges. His Excellency said that the most important need of our time is to convince minds, refine and elevate sentiments, nurture creative talents, spread the spirit of tolerance, respect intellectual pluralism, respect the ‘other,’ and correct misconceptions, especially among the youth.

The opening session of the forum featured an open discussion on the role of culture in confronting extremism. It stressed the need to find an effective strategy to deal with extremism and the thought that feeds it, and to find logical and workable solutions to these issues. The session also underlined the need to protect our Arab societies from the dangers of extremist thought by coming up with serious ideas that would deprive the forces of extremism and terrorism of any opportunity to influence Arab citizens.

The first intellectual session of the Forum discussed “The Causes and Remedies for Extremism". His Eminence Sheikh Abdul Latif Daryan stressed the importance of The Mirage, the book authored by His Excellency Dr. Jamal Sanad Al-Suwaidi, which discusses the issue of extremism and the history and evolution of political Islam movements, and finds possible methods of treatment. Mufti Daryan recommended reading this book, as well as the other research, lectures and books issued by the Emirates Center for Strategic Studies and Research on the phenomenon of extremism, its consequences, and strategies to challenge it. His Eminence then talked about the roots of the phenomenon of extremism, which has turned to violence in the name of Islam, pointing out that there have been great intellectual shifts on several concepts in Islam, including the concepts of legitimacy, Sharia, Jihad, and the state. For his part, in his speech during the first session Father Miguel Ángel Ayuso Guixot emphasized the importance of dialogue between religions in order to challenge those who distort the image of religion.

In the second intellectual session of the Forum, H.E Dr. Mohammed Matar Al Kaabi, Chairman of the General Authority of Islamic Affairs and Endowments in the United Arab Emirates, discussed the Authority's role in developing and raising awareness in society in accordance with the tolerant teachings of Islam. Further, he noted that the Authority has many strategic targets, including contributing to the development of religious awareness and Islamic culture, instilling the values of moderation and tolerance in society, preparing human resources, and investing in and optimizing its resources in order to develop and upgrade the Authority’s services to achieve excellence. On his part, H.E. Al-Sayed Ali Al-Hashimi, Advisor for Religious and Judicial Affairs at the UAE Ministry of Presidential Affairs, discussed the UAE’s rich and successful experience in monitoring religious discourse.

The third session highlighted the most important challenges facing the Arab world. The first speaker was Dr. Ahmed Abaddi, Secretary-General of the Muhammadiyah Association for Scholars in Morocco. He pointed out that the geoeconomic, geostrategic, and geoethnic nature of the Arab and Islamic region produces catalysts that fuel wars based on religious, sectarian, or tribal differences, in the absence of the necessary qualifications and capabilities to identify, understand and analyze what is going on. In addition the weakness of the political elites, the ambiguity and vagueness of their programs, the disintegration of the education and information systems, and the high unemployment rates play a role. Next, Dr. Abdul Hamid Al-Ansari expressed his thanks and appreciation to the United Arab Emirates and praised its exemplary model of tolerance and coexistence between varied cultures and religions. He said that the challenges we face in the Arab world are to find ways of promoting the values of citizenship, immunizing the Arab youth against extremism and terrorism, and promoting the concepts of tolerance and dialogue.

The Closing Session of the Forum began with remarks from H.E. Dr. Mohamed Mokhtar Gomaa, the Egyptian Minister of Islamic Endowments (Awqaf), who said introversion must be avoided, and Muslims must be open to global forums in order to deliver the tolerant message of Islam to the West. H.E. Dr. Hamdan Musallam Al Mazrouei, Chairman of the UAE Red Crescent Authority, called for human values to be raised high, and referred to the importance of philanthropic acts in highlighting the positive image of Islam and Muslims.

At the end of the proceedings of the "First Arab Thinkers Forum," the participants praised the wise leadership and the honorable people of the United Arab Emirates highly for their great efforts in hosting and launching the activities of this Forum and for their constant support for all that serves our religion, nation, and humanity in general. The deliberations of scholars and thinkers participating in the forum resulted in many recommendations, namely: the importance of forming a mutual capacity to build programs and curricula, based on which people entrusted with religious matters can be qualified globally, and empowered to effectively carry out their role in countering extremism, deconstructing its discourse, refuting its statements, rebutting its claims, and producing genuine, effective, and attractive alternative discourse. It was further recommended that initiatives be launched to introduce true Islam, and refute alien forms of religiosity, by making available genuine, moderate content based on a holistic view of Islam, rebutting the claims promoted by extremists in social media, and explicating relevant truths. Further, the recommendations included the importance of taking care of children and youth and investing in this group, which is the hope of the nation. The scholars and thinkers present lauded the commendable efforts exerted by the United Arab Emirates in this regard. They called for them to be shared and circulated among the countries of the region and the world. They also reiterated the importance of strengthening religious institutions in Islamic countries, enhancing the capabilities of those working at such institutions, and paying special attention to education, particularly in its early stages.

At the end of the forum, H.E. Dr. Jamal Sanad Al-Suwaidi, Director General of the ECSSR, extended the utmost appreciation and gratitude to His Highness Sheikh Mohammed bin Zayed Al Nahyan, Crown Prince of Abu Dhabi, Deputy Supreme Commander of the Armed Forces, and President of the ECSSR (may God protect him), for his continued support of the Center’s activities since its establishment. He also thanked the participants in the forum; religious scholars, intellectuals, thinkers, and academics who presented the essence of their thoughts and shed light on the current reality facing our Arab and Muslim communities, along with all communities in the world, as we seek to live with growing manifestations of extremism and fundamentalism, which have become a vexation threatening the stability of the entire world.