Information technology has brought about a revolution in the military and defense industries. This revolution has contributed to the creation of a new reality that altered previously recognized concepts of wars and armies, whereby asymmetrical warfare dominated traditional forms of conflict between adversaries. This technological evolution requires the provision of electronic warfare units in many of the world’s armies, where their role includes maintaining internal civil security and stability. Such technology advances have had implications for the quality and form of naval, air and land-based weapons, whether defensive or offensive. These vital topics form part of the regional and global research focus of the Emirates Center of Strategic Studies and Research (ECSSR), which held its 18th Annual Conference under the title:

'The Future of Warfare in the 21st Century'

The conference was held under the patronage of His Highness General Sheikh Mohammed bin Zayed Al Nahyan, Crown Prince of Abu Dhabi, Deputy Supreme Commander of the UAE Armed Forces and President of the Emirates Center for Strategic Studies and Research (ECSSR) on 9–10 April, 2013. The conference comprised four sessions, during which 12 research papers were presented by prominent experts, intellectuals, researchers and officials from the UAE, the Gulf region and the rest of the world.

On the first day of the Conference, discussions were held on the changing nature of warfare and the new challenges facing national security such as terrorism and electronic warfare. The topic of innovation in the defense industry and the future role of technology in military use was also discussed.

The second day's discussions included political and civil aspects affecting the future of warfare such as relations between civil and military institutions, the future role of armies in war prevention, peacekeeping, and the close and strategic relationship between arms manufacturers and military institutions. The proceedings of the conference concluded with a session on the future of warfare and stability in the Middle East, which included topics related to the region such as the purchase of weapons, nuclear weapons proliferation, and the risks facing the region’s security. 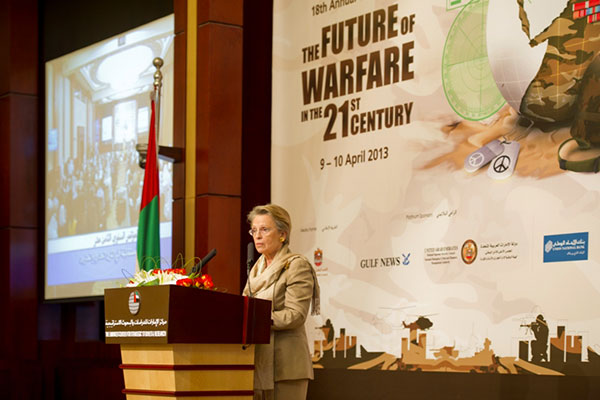